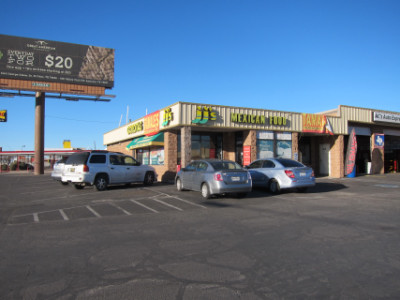 JJ’s first came to my attention as a small neighborhood Mexican restaurant with cheap prices and very hot salsa. The casual atmosphere meant that customers could spend as little or as much time as they wanted on the meal, and since food is paid for at the counter when ordering, patrons can leave as soon as they are finished or order the food as take-out. In addition to getting good Mexican food, it was sometimes very convenient to go out to eat and not have to make a “production” out of it.

JJ’s is probably best known for its gorditas. These are made with a deep fried corn masa, and while this is supposed to be a traditional Mexican recipe, it is surprisingly difficult to find any that are even close to the ones at JJ’s. Some web sites have published lists of restaurants that have them, and it looks as if there are about five or ten restaurants in El Paso that make them the traditional way (an alternate traditional way is to make them with a flour tortilla, but this is not the local style that I have experienced in El Paso).

After many visits to JJ’s I would definitely say that the gordita is their best item. Moreover, while I have not tried all the ones in El Paso, the one at JJ’s must either be the one by which all others are judged or else it is very close. There are several fillings available, and I prefer some over others, but the shell here is what I think makes them a standout (everyone has their own taste when it comes to the filling).

JJ’s opened in 1982, I have seen information on the Internet that it has changed owners since then. This may be completely unrelated, but I think the rest of the menu besides the gorditas have improved over time. I would say the chile relleno is almost as impressive as the gordita, which is why I usually like to get the Fiesta plate (which has both the gordita and the chile relleno). There are quite a few items I have not tried here, but that is because the ones I usually order are so good I don’t want to miss the opportunity to enjoy them every time I come. 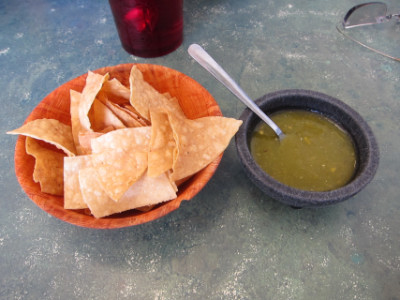 To me one of the main attractions of JJ’s is the chips and salsa. I made note previously that the Salsa was red, and now it is green. It is always on the spicy side, and to me it is obvious that it is made from fresh, locally grown chiles. Sometimes it borders on being too hot to eat with the chips, but even if this is the case a small amount sprinkled inside the gordita gives it an excellent flavor boost.

The Chips are always good and go well with the meal even if the salsa is too hot. 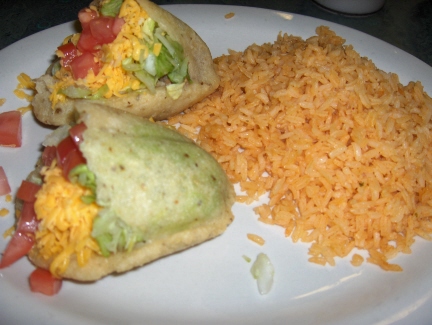 Avocado gordita with ground beef gordita in the rear

I can say two things about the Gorditas–I have always considered them to be the best item at JJ’s, and I think they are the best ones in El Paso. I know that there is a “Little” restaurant north of JJ’s in Canutillo that has a “Diner” atmosphere which is considered by many as having the best gorditas. At times I have agreed with this but the other ones have been somewhat inconsistent over the years. The ones at JJ’s have been remarkably consistent, and I think they are currently the best (although I like the other ones very much).

The gorditas at JJ’s are known for their light, thin crust that I think you inhale more than swallow (the flavor is very substantial, though). Inside will be a choice of several fillings: ground beef, shredded beef, chicken, beans, or avocado (I am not sure if the one with beans is still on the menu but if not, I am sure they can make it this way).

Avocado Gorditas have been one of my favorites, at least to go along with the “regular” beef or chicken one. It is interesting that the avocado turns the crust a green color as it soaks through, making this type of gordita easy to spot. The lettuce and tomato served in the gordita make the avocado taste somewhat like a guacamole salad. The yellow cheese is probably more to complement the flavor of the crust than the filling.

I would say that definitely the shredded beef gordita is better than the one with ground beef, but it almost seems that when I put copious amounts of the fiery green salsa on the ground beef it becomes an experience that I really enjoy and cannot get anywhere else (thus it is hard to choose whether to get the ground or shredded beef).

The chicken gordita was also excellent and is one of my favorites.

One final note about the gorditas is that they do not have a greasy taste or aftertaste, which is another reason that I think they are so popular. 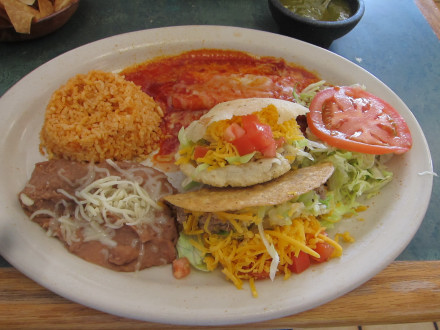 Combination plate with a red enchilada, gordita, and taco

The combination plate at JJ’s has a gordita, red enchilada, and taco. Both the taco and gordita come with ground beef, and both are picadillo style (mixed with potato). They will make substitutions on the fillings if you wish.

The Red Enchilada  has one of the city’s premier sauces in my opinion, and it has seemed less greasy than in the past (probably because of the ownership change). I have been told that this enchilada has the traditional taste of Mexico, and it is not as spicy as some (which I associate with the Mexican style). Another very good feature of it is that it does not have a cumin flavor.

The Refried Beans at JJ’s have not been noticeably greasy (I do not know if they are made with lard or corn oil but I do think that they taste much like the ones at other restaurants). They are very good for cooling the mouth if I order something spicy or use overly generous portions of salsa with the meal.

I have found the Rice to be genuinely good and flavorful (previously it was sometimes overcooked but I have not found that to be the case recently). 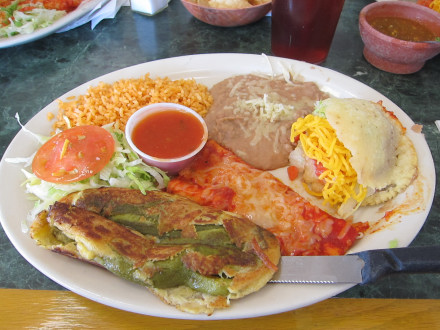 Shown from left to right are the chile relleno, red enchilada, and gordita on the Fiesta plate

The Fiesta plate substitutes a chile relleno for the taco, but otherwise is the same as the combination plate. The Chile Relleno is somewhat variable on how greasy it is and how many seeds they leave inside, but most of the time it is quite good, and I think a better choice than the taco. They give you a mild sauce to put on top of the chile relleno, and I usually like it on part of the chile while I prefer the rest of it plain.

Other Items
The Pregnant Burrito is so large it usually qualifies as a meal in itself. This is a very large tortilla enveloping a large helping of chicken and the condiments that provide the vegetables and spices. The pregnant burrito did not include the best grade of chicken when I tried it, but was otherwise delicious with large amounts of cheese, lettuce, avocado, and red chile.

Drinks
JJ’s serves aguas frescas drinks including Horchata that is one of the best I have tasted with generous amounts of cinnamon. With the amount of salsa I put on the items, though, I usually prefer tea so that I can get refills (they also give free refills on the salsa as well).

Closing Comments
I think JJ’s does one thing really well, and that is the gordita. Other items are also very good, and I think certainly better than they used to be. I think the gorditas here are certainly worth trying, and for most people they will be quite different than ones they have had at other restaurants.

This is a very casual restaurant. You pay when you order and they bring the food to the table, but after that you are mostly on your own (although you can get drink refills, etc.). Because of this the prices are cheap, and this makes it even better to enjoy what I consider to be one of El Paso’s treats.