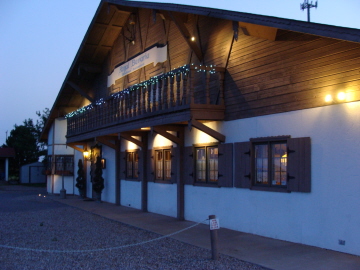 Oklahoma has traditionally had a hard time bringing in authentic and truly good ethnic restaurants such as Asian and Mexican, but with a large number of German immigrants it seems to excel in this particular genre of food.

Royal Bavaria is one of the premier German restaurants in the state, and as good as the food is, it is an even more memorable experience for many because of the home brewed beer that is served. I have eaten German food from Washington, DC to Washington State, and the offering here is near the top in quality of the food and the atmosphere.

I should point out that I have been to Royal Bavaria when it had its original owner, and there were quite a few changes I noticed in 2009 with the new management. In my opinion these changes were for the good, but the restaurant did not go from bad to good– it went from good to better.

One feature I really appreciated was that the restaurant is now totally non-smoking. This may be due to a state law rather than customer demand, but I found the previous non-smoking section to be inadequate. There is an outdoor patio that I think now serves as the smoking area for those who prefer it.

The new owner was a long time employee at Royal Bavaria before taking over, and I would say the food is really the same as it has always been. It was explained to me, though, that he felt it to be important to have an extended stay in Germany where he lived with a German family and learned many aspects of home made (as well as restaurant style) German food. Perhaps some would not fully appreciate the commitment made to preparing the food here, but I got the feeling that this was about as authentic as one would find in a German restaurant in the U.S.

I do not need help in determining what food I enjoy, but a dining companion confirmed that the “new” restaurant was authentic and served high quality German food (from having a German background). Being authentic is not a substitute for serving good food, but in the case of Royal Bavaria I think customers get both. 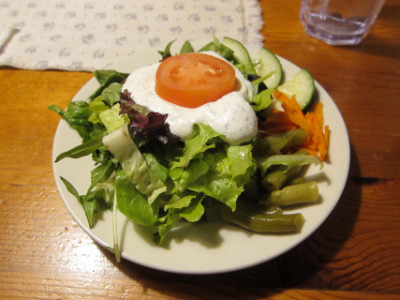 I think the Salad selection here is not as extensive as at Ingrid’s, and certainly would not match Castle Falls, but the quality here seems to be as good as anyone’s. The salad shown in the photo is the house salad that comes with some dinners (and I think you can substitute a dinner side dish such as sauerkraut for the salad if you wish). 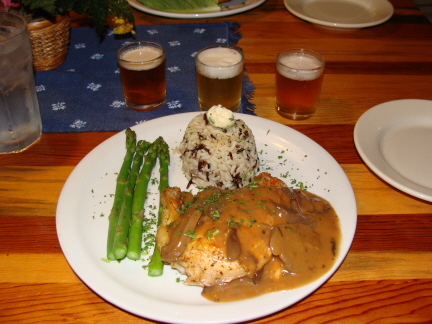 Hähnchenbrust with a “beer sampler”

One entrée I sampled at both the “old” and “new” restaurant was Hähnchenbrust in Cognacsause (chicken breast in cognac gravy with mushrooms). This was outstanding both times, and I think may be the best item served. One thing I enjoyed about this dish was that it was good without the breading that comes on many of my other favorite German dishes. I cannot attest as to how healthy this dish is, but it certainly seems to be. 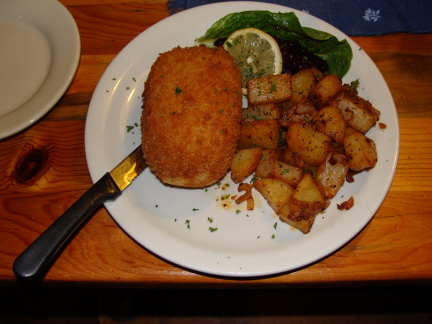 Cordon Bleu is a breaded dish stuffed with cheese and ham for a delicious, traditional dish. Different types of meat are available, and the veal I sampled was very good. In terms of flavor this was probably as good or better than the chicken dish I rated as my favorite, but chicken is something I prefer to order when I can. My dining companion thought the cordon bleu was prepared well and was an excellent example of German food. 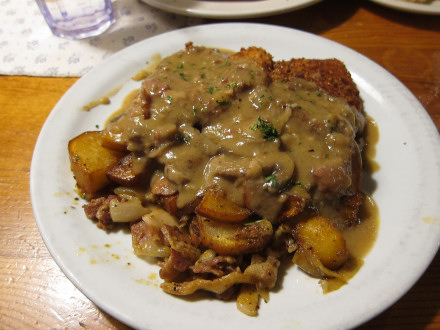 The Jägerschnitzel here was excellent, and although the mushroom sauce was something I liked very much, probably the meat itself along with the breading made it better than at many other restaurants (this was a pork loin). Fried potatoes were served on the side, and they are partially covered with the gravy, so this photo might make the schnitzel look larger than it actually it (but it was ample enough).

This is one case where I think the photo makes the dish look as good as it actually is, and I think it will sell itself (I can only say that for me it did not disappoint).

Other Meat Dishes
The Sauerbraten on my first visit was good but not outstanding. However, I have not tried it recently. I would also give it a favorable rating compared to others I have tried. 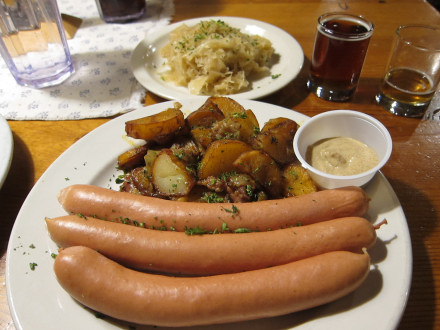 Frankfurters from the sausage sampler

My dining companion on one visit discovered a feature of the restaurant I had not known before–you can make special requests. In this case he saw the Sausage Sampler on the menu, but only wanted the frankfurters from it. They accommodated this request, and it also came at a cheaper price than what customers would pay for the full sausage sampler.

With the German mustard they provided I thought the Frankfurter was quite good (that is, the small portion that I sampled).

Side Dishes
Side dishes were good, but the most notable was the Bavarian Potato Salad I tried on my first visit.

One feature I would probably rate as a minus with Royal Bavaria is that customers have to pay extra for a basket of bread. I tried the bread on my first visit, and thought it was good. On a later visit, though, I skipped the bread, and found the meal to be quite filling enough without the bread. 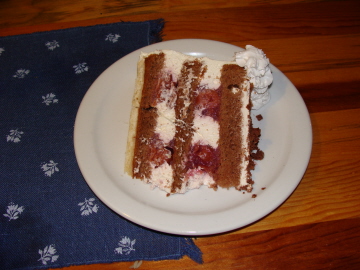 Black Forest Cake is one of the dessert items available, and I thought this was a good treat after an equally delicious dinner. My dining companion thought this was the only item we had that was not really similar to ones served in Germany, but we enjoyed it anyway.

Additional Information
I do need to mention that Royal Bavaria serves home brewed beer, and sample glasses are available (as shown in the photo of the Hähnchenbrust). I am not a good judge of such things, but a lot of people seem to think the beer is one of the best features of Royal Bavaria. I can say that I enjoyed it, but I will have to let the reader decide how the beer would rate compared to other restaurants.

Royal Bavaria also owns Das Boot Camp in Norman, which is a more casual restaurant that does not serve some of the high-end dishes such as Hähnchenbrust. It is also open for lunch (Royal Bavaria is not), and the Norman restaurant serves as a late night hangout for students and others who like to hang out late at night.

Royal Bavaria is open late enough, though, that customers will be able to enjoy the food and the beer. As of now Royal Bavaria is still in a rural setting, although I see urban development getting closer every time I go out there.