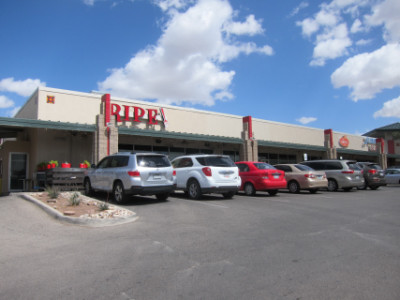 The genre of “New American” restaurants has become very popular in El Paso, but Ripe was one of the original ones in the city and I think it helped to create the market which many other restaurants are now filling. I have had a hard time defining exactly what “New American” means other than that it is different from restaurants which serve traditional American food. Having the “New” in the name allows the chefs to experiment and combine American food with other cuisines in some cases (Ripe had a large Italian influence when it first opened). I read articles about the original brother and sister owners, and the one theme which dominated was their passion about good food and their desire to share it with the city.

Ripe has since changed owners, but it is still operating by many of the restaurant’s founding principles. The original restaurant provided a la carte orders cooked in small batches made from the freshest ingredients. They still have small plates and sandwiches available in addition to full dinners. The “freshest ingredients” aspect of the restaurant has meant that the menu has changed over time, including the seasonal menus that they used to provide. Now (in 2021) there is a fixed but streamlined menu because of the pandemic, but I think what they are trying to accomplish in the food has not changed. 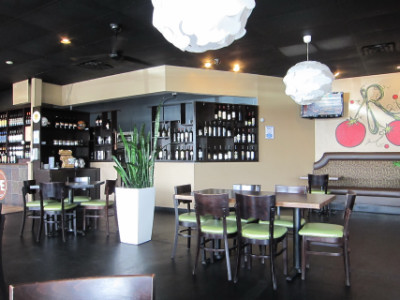 For the original food I will refer readers to my previous review. The items shown in this article have all been at the restaurant since the ownership change, but not all of them are available on the current menu. The others give an idea of what the restaurant has done and what might be brought back at some time in the future. Even under “normal” conditions, though, the regular and seasonal menus did not remain exactly the same from year to year. 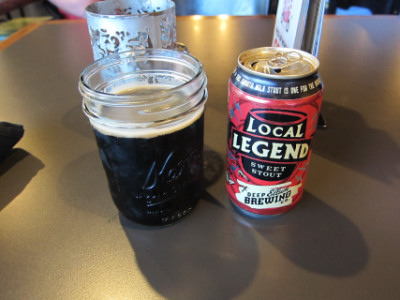 It is not unusual for restaurants in El Paso to offer beer, but it is unusual for them to offer anything that would entice me to order it–especially ones that come in a can. This generally happens when they have craft beer, local brews, or some unusual labels I cannot find anywhere else. On a visit to Wisconsin I found a local brand that was good enough to make this my drink of choice at restaurants, but for me this is definitely not normally the case.

There is a large wine selection as well, although much of the menu (sandwiches, hamburgers, etc.) is something I think goes perfectly well with other drinks such as iced tea (and the tea here is quite good). 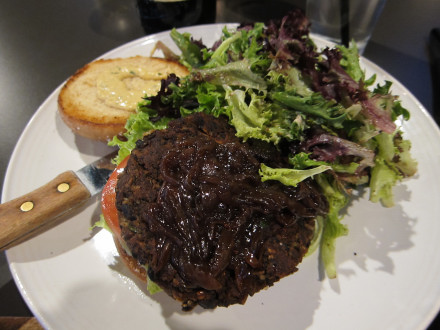 There are at least three advantages of ordering a sandwich at Ripe: (1) they are always on the menu, (2) it keeps you in the $$ price range, and (3) the ones I have tried have been better than at other restaurants. In the case of the Black Bean Burger I am not sure that this is the best I have had anywhere, but I do think it is one of the best in the city. The one I ordered here was a Tuesday special, but I think this meant it was at a lower price rather than that they only served it on Tuesday. I liked the fact that it was slightly spicy but they were not using the spice to try to bump up the flavor (there was flavor enough from the fresh ingredients). The Simple Salad that came with it was fresh and had a good flavor. 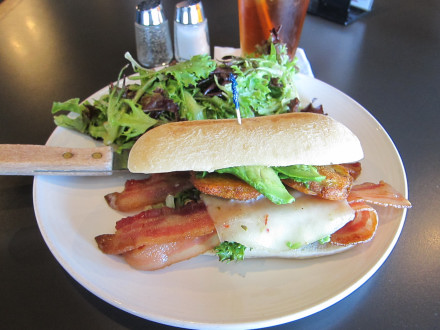 I ordered a BLTA from the Summer Seasonal Menu, and it turned out to be one of my favorite sandwiches. I will have to say that even adding the “A” (avocado) to the traditional BLT did not fully describe it–the menu listed toasted ciabatta, bacon, pepper jack, avocado, chipotle mayo, lettuce, and fried green tomatoes. In terms of flavor I think what I appreciated the most over the traditional BLT was the cheese. The chipotle mayo was something about which I was wary, but it turned out to be very good with just the right amount of kick. The avocado was fresh but not so soft that it oozed out of the sides to make a messy meal as well as a tasty one. On the bacon they did a good job of making it just a little bit crispy so that it still had most of its flavor but I did not feel as if I were eating something greasy and soggy (usually I prefer bacon that is crispy rather than soft).

Ripe is known for its burgers, which account for the majority of sandwiches they serve. Burgers are not usually high on my wish list, but what I have heard about the ones here must mean that they are very high quality.

In the past one of my favorite items here was the Panini. There is currently only one type of panini on the menu, but a waiter indicated that you might be able to make a special request if there was a certain type of sandwich you wanted. I think that at some point this will be worth a try. 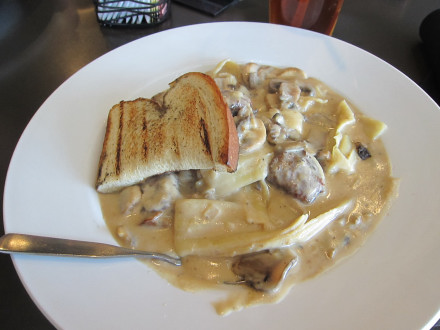 Large plates do not really seem to be Ripe’s specialty, but the Fall Seasonal Menu offere Swedish Meatballs in a fairly large serving. It was on the menu every year and thus could be considered one of Ripe’s regular items (during 2020-21 the seasonal menus have been suspended). I had been looking forward to trying it since I heard about it, although perhaps I built it up too much in my mind because it turned out to be somewhat of a disappointment. The sauce was good, and although it was similar to stroganoff dinners I thought this was better than most stroganoff dishes I have tried. The meatballs seemed somewhat dry, though, and it did not have much flavor contrast to the overwhelming amount of sauce that it contained. I certainly cannot say that this was a bad dish at all, but it was just a little less than I expected from something this expensive and which I had anticipated for so long. 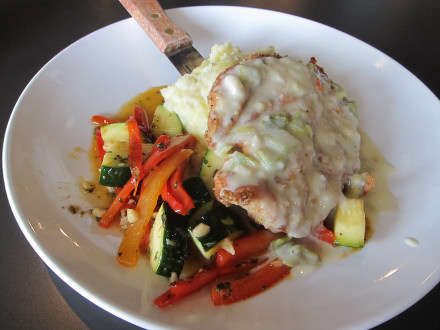 The Chicken Fried Chicken was on their streamlined menu available in 2021, and I will have to say that this was one of the most impressive dishes I have had at Ripe. It came with a green chile Bechamel sauce (the chile spice was noticeable but subtle), the chicken was high quality, and there was enough sauce for both the chicken and the potatoes. It probably qualifies as another “large plate” dinner, although it did not have the oversized quantity of food found at many restaurants.

Other Comments
Ripe has undergone some major changes since it opened, but some themes are still present–it still tries to be healthy and to provide the freshest ingredients. It no longer has a large vegetarian menu, nor do there seem to be many Italian choices as there were in the past, but I think describing it as “New American” fits both the early and the present restaurant.

Ripe used to have a breakfast restaurant next door called Ripe Sunrise Cafe, but it seems to be a casualty of the pandemic. According the Yelp, however, they do offer breakfast on Saturday and Sunday.