For many years I have thought that while the Mexican food in El Paso is very good, it tends to be only certain dishes at certain restaurants that are the best. Many restaurants did not seem to live up to their potential, and it was very hard to find places where I could say that just about everything they serve is consistently good.

I think this situation has now changed, largely because of some of the new upstart restaurants such as Sofi’s. Actually I think the Mexican restaurant scene is returning to the way it was in the 1970’s and 1980’s when I first explored the El Paso Mexican restaurants and found them to be so good I had a hard time imagining why people would want to eat anything else. It is possible that the very good restaurants have been here all along (and I know some of them have been), but now I think they are more numerous and easier to find.

If I were to put Sofi’s into the big picture I would say it is a fairly new restaurant (the oldest reviews I can find are from 2015), it is a homey inexpensive place like Good Luck Cafe, but it strikes the balance a little more toward upscale food with a little bit higher prices than Good Luck Cafe. Like Good Luck I enjoyed everything I had on the Mexican plate, but there were some subtle differences such as the cheese and the taco meat that made it better. The chile relleno was possibly better at Good Luck Cafe, though.

In El Paso you can make endless comparisons between different Mexican restaurants, but the main theme about the Mexican plate at Sofi’s was that everything was good. In my opinion it is a very good representation of El Paso style Mexican food. Something I found surprising was that they only had one Mexican Plate (combination dinner), just like at Good Luck Cafe. In fact, the list of items served at the two restaurants is the same, as it is at quite a few restaurants in the city. There is also enough variety on the Mexican plates that I seem to never get tired of them, even though all of these restaurants have a number of other items on the menu to order.

I did not have a favorite item from the plate because they were all good, but the Deshebrada Taco was one thing I thought was significantly better than at other restaurants. If the meat had been served on bread instead of a tortilla it would have made an excellent roast beef sandwich, with very flavorful roast beef like the kind I have found in upscale restaurants. This really seems to be one of Sofi’s specialties. Just as notable was the fact that the taco did not seem at all greasy (although it is served with a soft shell).

The Enchilada stood out from others because of the Mexican style cheese they used. Over several visits, though, I have found it to become more greasy so overall I cannot say this is one of the best versions of enchilada.

The Chile Relleno was a little more greasy than most, which was offset by a sauce that was more flavorful than most. Overall I would say it is one of the best in the city.

The Beans were very good but it seems that there are always some that are better (such as the ones at Chope’s in New Mexico). 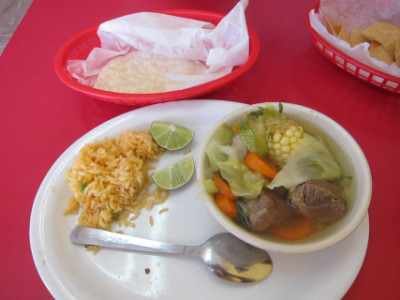 Sofi’s has daily specials for lunch on weekdays that are not only at a cheaper price than the regular version on the menu, but also come with a bowl of Caldo. In El Paso the caldo is traditionally made with beef and comes with a generous amount of vegetables. The one at Sofi’s is very good, especially with the “generous” part. 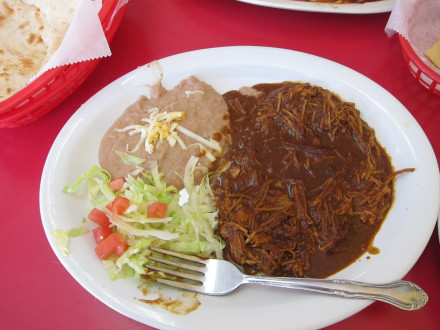 I was able to get the Mole special served on Wednesdays, which I thought was very flavorful. The chicken was shredded, which I think is the traditional way to serve it, and there was an ample amount of meat in the serving. The mole is Poblano style (dark colored with a chocolate flavor). The Chile Colorado is a regular menu item (not a daily special–at least not at the time I ordered it). The pork cubes were very tender (and it also contains a good proportion of potato cubes). The sauce was on the spicy side (very close to five chiles on my 1 to 5 scale) and had a good flavor. I did not necessarily think this was my favorite chile colorado in the city but it was definitely above average.

Lent Specials
Sofi’s follows an El Paso custom of offering special meals during Lent on Fridays before Easter (and probably other holy days such as Ash Wednesday). What was surprising to me, though, was how well they did the food (even though I have been pretty impressed with their other food as well). Lentejas is one of the appetizer choices

Lent specials have the customary chips and salsa, and then a choice of appetizers. One is the lentil soup (Lentejas). I thought this had a good flavor but it had a large proportion of onions which I found curious (although not so much that I did not like the soup). My dining companion chose the Fish Soup as the appetizer, and the sample I tasted made me think this was one of the best in El Paso (although I have not tasted a large sample at other restaurants). In fact it was so good I would advise giving it serious consideration as the appetizer choice (even though I really love lentejas). On the Friday I went there was only a limited number of choices for the main course, one of which was the Pescado a la Veracruzana. This is actually an item from the menu that is available any time, except that for the Lent special it is plated with white rice and a salad. I liked this fish very much, and would compare it to the one at El Jacalito (which has been my long time favorite place for Lent specials). I liked the sauce a little better here than at El Jacalito (it was spicier) but I thought the fish here was not quite as good (it seemed to be a little overcooked). Overall I think that Sofi’s and El Jacalito have the two best versions of pescado a la veracruzana (a dish which I associate with a tomato flavored sauce and with green olives, although not everyone prepares it this way). 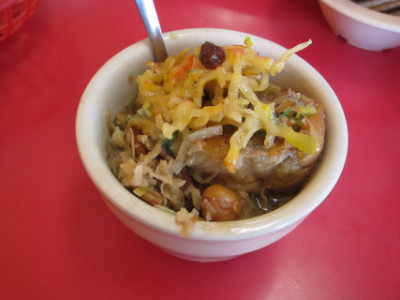 Traditionally diners get Capirotada for dessert–a type of bread pudding which everyone enhances with their own touches. This one was probably a little bit more “dry” than most (not as much syrup) but I think it also had more extra ingredients than most. The Salsa here was exceptional, with large chunks of green chile providing much of the flavor. The Chips were exceptional as well, with a good flavor but no oily aftertaste.

Other Notes
I came away with a couple of overall impressions at this restaurant. One was that it is very good overall, and some items that normally do not impress me much (such as the taco) were an integral part of the Mexican plate. Another impression was that the cheese was the main factor that set Sofi’s apart from other restaurants, but other items such as the sauce used on the chile relleno kept any part of the dinner from being a weak link and one that would detract from an overall good experience.

This is a family restaurant and has been very busy the times I have gone. I did not find the service lacking considering how many people they had to accommodate.

The menu had so many items that I am sure that some of them might not be as good as the ones I tried, but on the other hand some might be better. One thing I look for in a really good restaurant is that the beans, rice, chips, salsa, etc. have the same quality as the main dishes, and I found that here.

I do need to note that I have downgraded the rating from my earlier visits because of an increased greasiness that I perceived in some of the items. It is still one of my favorite Mexican restaurants, though.

COVID Update: The restaurant has made some changes because of the pandemic, and I am still trying to assess what they are and whether they are permanent. As of April 2021 it is back to normal seating (earlier they had every other table blocked off). I do not think, though, that they currently have the daily specials that they used to offer.