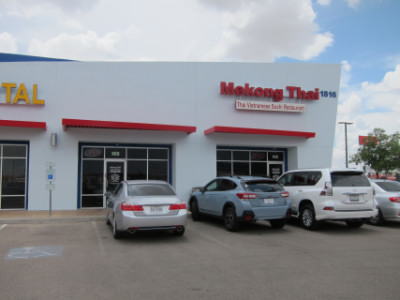 Mekong Thai represents both the frustration I have with El Paso Asian restaurants and the surprise that we get Asian food this good in a city where most people know little about authentic Asian cuisine.

My frustration stems from the fact that this restaurant is called Mekong Thai, Vietnamese, and Sushi (the Mekong River runs through two of these countries so that part at least makes sense). My philosophy is almost always that if a cook is from a certain country, that is the cuisine I want to try in that restaurant. I also know that if I ask for the authentic version there is a good chance it can be specially prepared, or that I will be pointed to the best menu choices for the type of food I want.

At this restaurant I was trying to ask these questions but I really do not think they understood what I wanted. The waitress told me that pad thai was a very popular dish and therefore that is what I should order (which was not the question I was trying to ask). I did order it, though, and afterward one of the chefs came into the dining room and I was able to ask him what had been my real questions. I found out that this was in fact one of their better dishes and that I had been given a good recommendation. Thai food was the chefs’ specialty, and at least the name “Mekong Thai” and the fact that most of the menu was Thai food gave a good indication of this.

Further conversation revealed that at least one of the chefs is from Laos, and the “native” food for both of them is Lao/ Northern Thai (Isan) style food. A former restaurant called True Thai on Fred Wilson Avenue across from Fort Bliss had an owner from this area, and she once made a special order of Isan style pad thai for me which I really loved and have been seeking out ever since. I believe the pad thai at Mekong is what I have been seeking, and perhaps it could be made a little bit more authentic if I request it, but the version they served me seemed really close. 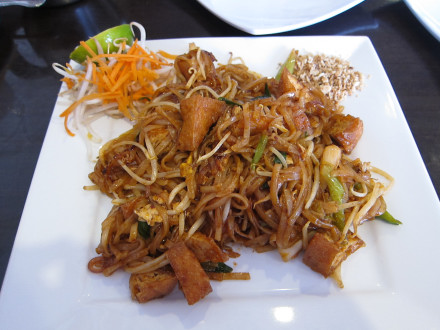 Pad Thai is supposedly one of the most popular dishes at Mekong, and this makes me think that people in El Paso (as in most other places) appreciate authentic and well prepared Asian food when it is made available. I think this surpasses the flavor in most pad thai dishes, although I could not say specifically what ingredients are in it unless I asked the chef. The color makes me think tamarind paste is prominent in the sauce, and the other ingredients are what I would expect in a good pad thai. In any case I thought this was a very good version of the dish.

My notes say I ordered the pad thai at a three star chile level, but I do not know the maximum amount of stars they have. To me the 3 star level was not enough, and I used the chile they gave me on the side to supplement it. It is always necessary to experiment with the chile level when I try Thai food in a new restaurant, and I made it right by adding my own. At least I am fairly confident that they will not surprise people by making the food too spicy for them (I have had this happen on occasion, and restaurants are probably following good policy by erring on the side of making it too mild rather than too hot).

Lao Food
On one hand I was upset that the wait staff could not give me enough information to know that the chefs were Lao, so that I could have ordered this type of food. On the other hand, though, I got one of the best pad thai dishes I have ever had (at the waitress’s suggestion), and I do think it was northern Thai (Isan) style based on what I can remember about the pad thai I had at True Thai Restaurant.

My belated conversation with the chef did give me some good information for next time, though, or just for general knowledge. He indicated that a couple of items on the menu are Lao dishes–papaya salad and a beef dish (I did not get the name of it but I think it was written on a special menu board they had).

The chef also indicated that there are several dishes on the menu that you can ask to be prepared “Lao style” so that they will have a little different flavor than the normal version. One thing he mentioned is that Lao food has more egg in it than the Thai version.

Some Further Comments
With Thai food I need to try several dishes before I can determine what I think is their best dish. What I can say, though, is that the pad thai was one of the top ones I have had anywhere.

I am not giving a rating to the restaurant yet because of the small sample size of food I have tried. In addition, I have not tried the Lao food, and I do not know if there are any “special dishes” which I could try. I do know, though, that the regular menu has some solid choices of delicious food.

They apparently have Vietnamese food as well, but I have not tried it and I do not even know what dishes are offered. I do think, though, that these chefs have good expertise with Asian food.