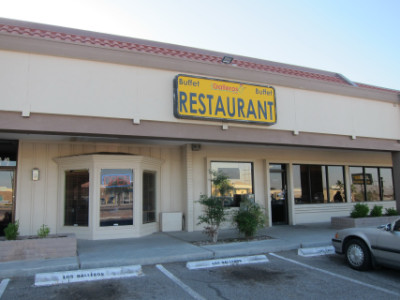 One of the restaurant’s specialties is breakfast, and this is the reason I made my first visit after the name change. They had a large breakfast buffet which included scrambled eggs and the normal breakfast items. I did not spot Mexican dishes in the buffet, although it may be possible that they will serve them on request (I did not ask about this). I also noticed that tables were served chips and salsa as part of the meal. 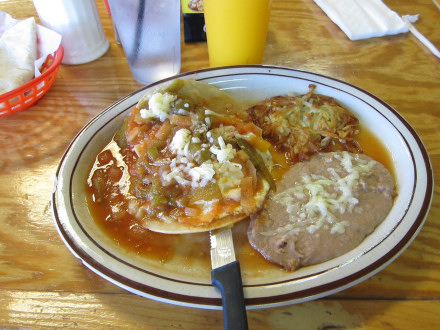 I ordered Huevos Rancheros from the menu, meaning that I could not get the “all you can eat” special from the buffet but this meal was very filling and extremely satisfying. In addition to beans and hash browns, it had an excellent flour tortilla. This was one of the three or four breakfast specials they had, meaning that it was a very good price (mine was $3.99).

I thought the huevos rancheros were excellent–they had a very good flavor and were spicy without exceeding the spice level that I thought was appropriate for this dish.

The Hash Browns were very good (especially when compared to the ones at New Clock which I thought were greasy).

The Beans were excellent and not greasy.

A glass of Orange Juice I ordered at an extra charge was the only disappointing part of the meal, and something I would probably skip in the future (I believe they said you could order horchata for breakfast along with the standard drinks such as coffee, etc.).

Lent Specials
I happened to go on a Friday during Lent at the old Los Gallegos and discovered that this is one of the few places with an authentic comida de cuaresma (Lent special). I tried the Pescado Veracruzano (pollack with a tomato sauce, peppers, green olives, etc.) which was actually on the menu all the time. Although the fish was not very good quality the preparation was excellent, and I enjoyed the sauce and the side dishes including good old fashioned french fries. What made the Lent dinner unique were the lentejas (lentil soup) that was one of the best I’ve ever had and the capirotada (bread pudding) for dessert. I noticed a sign at the new Los Galleros that they still have Lent specials and it seems that this is still one of their specialties.

Regular Menu
I had a problem with some of the regular menu items at Los Gallegos, though (and hopefully this may be one area where the new “independent” restaurant may be different). For instance, the Chicken Mole had a pretty decent mole sauce, but the chicken meat was so tough you needed a knife to cut it.

Tortilla Soup was served in a huge quantity such that the large bowl (for about $3) was enough for a meal at Los Gallegos. However the tortilla strips begin to disintegrate so that it became a soggy mess (another example of a dish which I hope is now improved at the new Los Galleros).

Overall Comments
Having a breakfast experience at Los Galleros may not be enough to give me a full picture of the overall food quality at the restaurant. However, it was very encouraging and much better than the meals I had before at Los Gallegos. This, along with the good experiences I had at Los Gallegos (such as the Lent meals) makes me think that the owners had a purpose in changing the name and that they have retained the good features of the old restaurant while adding some new ones that customers will enjoy.