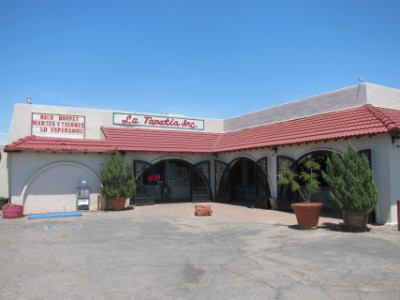 I first ate at La Tapatia sometime around the 1980’s, but when I returned in 2019 I had to ask them if it was the same restaurant, knowing that it is very rare that a restaurant would continue in business that long and still be the same. I was informed that it is not only the same restaurant, but they are now celebrating 65 years in business. Thus I am still amazed that so many of El Paso’s classic restaurants are still going strong (and mostly with the same food they have always served).

Being a couple of blocks from the historic Ysleta Mission, La Tapatia may have caught the eye of some tourists along the way, but it would primarily be considered a neighborhood hangout. They serve breakfast and lunch, and it seems to be popular with people who may want to have a leisurely meal with friends or just hang out in the relative comfort of an indoor setting (particularly helpful during El Paso’s brutal summers). Those who do not have this much time are accommodated also, though, with meals that are prepared with relative speed considering that each order is individually prepared.

While they have a Mexican Plate and a “Super Mexican Plate,” most of the items are served individually so you can have as much or as little as you want. Orders are taken at the counter and they bring it to your table, but otherwise it is mostly self-service. Orders do not come with chips but you get containers of red and green salsa.

Old Country Road, on which the restaurant is located, is the original more serpentine version of Alameda Avenue before it was widened to four lanes. Alameda was the main highway to San Antonio prior to Interstate 10 being built, and serves as the main street of Ysleta. The restaurant is visible from Alameda, and is located a couple of blocks west of the Ysleta Mission. The mission is a historic structure that has been at its present location since 1851 (after older buildings were destroyed because of flooding). Ysleta is the farthest west point along the El Paso Mission Trail, and it is well worthwhile to also visit the Socorro Mission as well as the San Elizario Chapel. 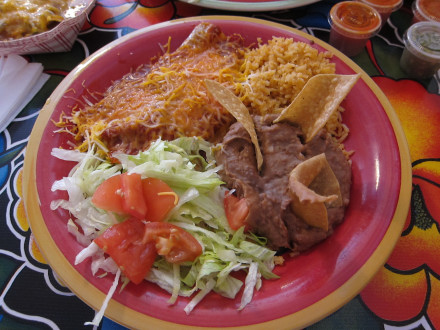 The Enchilada Plate is the item I remember from previous visits that brought me back to try the restaurant again. The red chile has a very good flavor and the spice is right (about 4 on a scale of 5). El Paso is full of restaurants that serve enchiladas very much like the ones here, and this indicates that there is a right way to do them and the only question is whether they are executed correctly (and these are). I think a very few are especially good (such as Forti’s), and a great number have some trouble meeting the standard (especially at the cheaper restaurants). La Tapatia, though, is in good company by giving a good product that meets the expectations of its customers (or at least it certainly seems that this is the case). 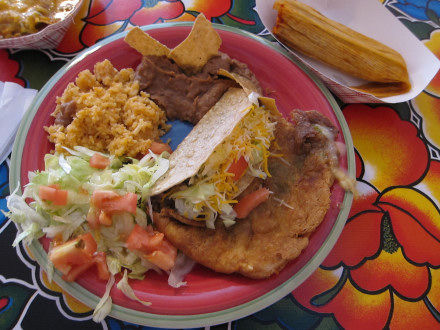 In case anyone is wondering whether I am in some sort of eating competition, the answer is that I did not eat all of the items on these two plates by myself, but they were shared with a dining companion (but still with some leftovers). The Super Mexican Plate came with a taco, chile relleno, and tamal (I did not try the taco). I honestly think that this plate alone would be enough to feed two people, assuming that you would also eat all of the rice, beans, and salad (which we did not).

The Tamal (tamale for those from other parts of the country) seems to be one of the specialties of the restaurant, and I think this was the best item on the plate (note, of course, that it was not actually on the plate but in a separate container). Some Internet reviews have emphasized the fact that they make their own masa, and of course this is one of the keys to the quality of the tamal. Equally important, though, are the meat and the red chile sauce which had an excellent flavor.

The Chile Relleno had an excellent flavor (and is among the top in El Paso that I have found). It was a little greasy, though. This is not at all unusual or even a negative, but a few others in the city have flavor this good without as much grease. The chile and breading were excellent, and I really liked the fact that it was not covered with sauce (the chile, breading, and cheese were really enough flavor). They do give you salsa in a container, though, in case you are craving the extra flavor.

I am not sure what items are on the Mexican plate, but at most restaurants the chile relleno is considered a deluxe item and is only on their more expensive plate (as it is here). One thing that is easy to do at La Tapatia, though, is to order the items you want a la carte and build your own plate. 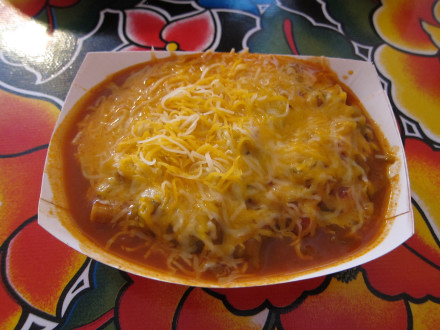 Another specialty of the restaurant is the Rolled Tacos. These are somewhat of a mini-meal (not really big enough for a meal but they make a very filling side dish or small meal). I did not really notice the “taco” part of it very much (the meat), but it had so much of everything else that it was quite impressive. It not only had a massive quantity of cheese, tomato flavored sauce and green chile, but the flavor and quality was quite good (the chile did not really bring it to the “spicy” range, but gave it a good flavor). The rolled taco shells are deep fried and keep their form despite being soaked in the sauce.

I believe some have commented that this is a better version of the tacos at Chicos Tacos (a local chain which specializes in rolled tacos). I believe, though, that this is an understatement, and that these are so much more than just “better” that these qualify as a specialized El Paso dish that is worth seeking out.

Additional Comments
La Tapatia has been doing something right to be as popular as they are for as long as they have been here. I think they have several dishes which are really their specialties, two of which are the rolled tacos and the tamales.

The red enchiladas are really my favorite item here, but they are not unique in the sense that there are quite a few restaurants that have something very similar (in style, flavor, quality, etc.). The ones here give you a good taste of El Paso style enchiladas, and I definitely recommend them.

Others mention that the gorditas are very good, but I did not try them (as it was I really had too much food to eat).

The restaurant is very down home and not fancy at all. At the other end of the scale in El Paso are the restaurants with margaritas, mariachi music, etc. The good thing about El Paso is that almost everybody serves good Mexican food, it is just a question of what type you want. I would call La Tapatia a little bit offbeat, with one of their specialties being the rolled tacos (an item served by relatively few restaurants, and I think La Tapatia’s style is different from everyone else’s).

I do need to note that breakfast seems to be as popular as lunch, but I do not know what items they serve. I do know that it would probably be a good bet to get something with green chile (after spending time in other parts of the country I know that you seldom find green chile that is the same quality as in the El Paso/ New Mexico area).