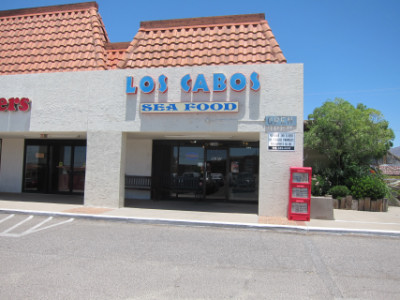 The name “Los Cabos” made me think that they might have have Baja style tacos and other seafood dishes from Baja California. After asking the staff, though, I do not believe there is anything here that I would call Baja style. The seafood in El Paso seems to all be Mazatlan style, which is the closest seaport to where we are located. I think there is nothing wrong with this style of seafood, but it is just a recognition that all the restaurants in El Paso serve the same style of food, they just try to do it better than everyone else.

When pulling into the restaurant for the first time I saw a tree on the right side of the building. This actually covers an outside patio that was very popular the day I went even though the temperature was quite warm (as it tends to be in El Paso). I do not know if it is an actual outside patio or whether it is temperature controlled because I did not go to the patio to look. The dining room was not completely full (and I went on a busy day). It seems that people use the patio by preference and not because tables become unavailable in the dining room.

My first visit was probably somewhat clouded by what I consider to be flaws in the service, and I am not yet giving a rating to the restaurant (it probably would be a good idea to try some other dishes as well). At this point I do not have anything against the restaurant or a reason not to return, but it is just that I have had better experiences at other places.

Not directly related to the restaurant itself is the fact that it is located in the Colony Cove shopping center. I used to work for the city and saw how they approved parking plans along with other design criteria when approving commercial centers. In the case of Colony Cove, I saw them go through this process and then step by step change things for the worse once the plans were approved and the business spaces were occupied. With the handicapped spaces in particular, Los Cabos has a bad situation where the parking is far away from the door, and people must go on a steep incline to get to the building. The restaurant is accessible according to the regulations, but I feel that someone in charge of the situation could make it a lot better if they desired. 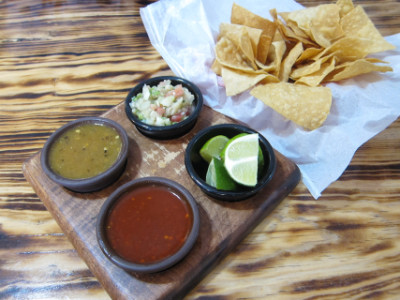 Patrons get a free set-up of chips and salsa (and I found out they will give refills at no charge). Along with a red and green salsa, there is a fresh ceviche to load on the very fresh and delicious chips if you wish.

I have noticed very good comments about the chips and salsa, and I agree with them. The green salsa, though, was very notable because it was one of the best I have ever had. The red salsa and the ceviche would be considered quite good compared to what most restaurants serve, but to me the green salsa was so fresh and had such a good flavor that it blew the others away. The green salsa is not fiery hot, but had a good kick that I would rate at about four chiles out of five. The red salsa was also somewhat spicy (at least three chiles). I think the ceviche had a little kick as well, but I noted it more for its good flavor. 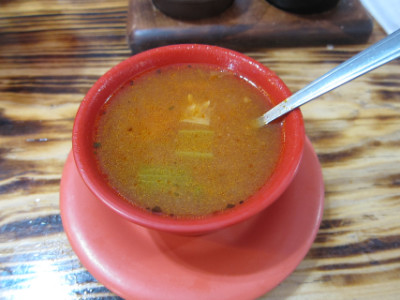 Meals come with a free cup-sized serving of Fish Soup that is so loaded with fish and vegetables it was really more like a bowl than a cup. I enjoyed the flavor (it was a traditional flavor like the ones I find in the city’s other seafood restaurants). This one seemed to be spicier than most, which I think would get to the five-chile level if you drank the broth straight. I definitely give thumbs up to the soup (especially since it is free). 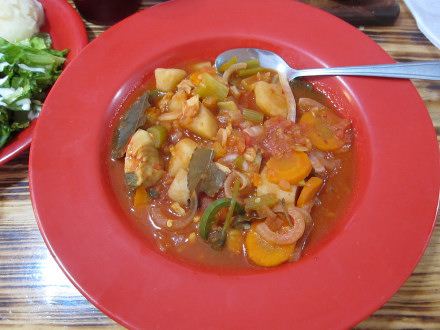 One section of the menu gives a choice of shrimp or fish fillet with different toppings (by the way, they do have non-fish items but seafood is about 90 percent of the menu). All items on this section are served with a salad OR steamed vegetables AND mashed potatoes OR french fries (as described by the menu). There are fourteen choices of toppings, and many are ones I have not seen at other restaurants (or else I have not noticed). For my first time at the restaurant I chose my favorite, which is Fillet Veracruzano. This has a sauce which is traditional in El Paso, and includes vegetables, olives, and potatoes.

First of all, though, I defy anyone to find the olives in the picture, because I never found any. The potatoes were plentiful but other versions have not had this, and I am not sure if this is really a traditional feature of the dish (they were good, though). The vegetables were quite good. I was not sure whether I gave the sauce a thumbs up or not because it seems that I have had better sauce at other restaurants. I have had enough bad sauce in Oklahoma, though, to still appreciate the ones here even if they do not seem to be the best in town. 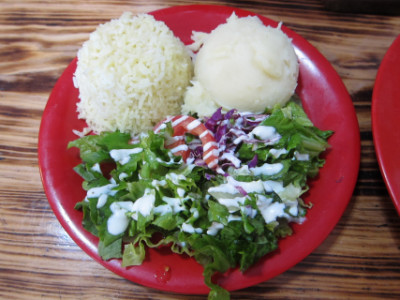 Because the Veracrucano sauce has a consistency like a soup, the side dishes and salad are served on a separate plate. This is a good feature of the dish, since I am happiest when my food is separated or even in separate dishes rather than all mixed together. The salad was very fresh and good. The mashed potatoes tasted fresh (not instant). To me the rice tasted so-so, like most of the rice in El Paso. There was so much food I could not eat everything, so the rice is mostly what I left on the plate.

The fish tasted like most of the fish in El Paso–fish that had come from several hundred miles away. I am puzzled by reviews I see of many restaurants in El Paso where people describe the fish as good, while to me it is just passable. This is why the sauce has to be extra good at a seafood restaurant for me to really enjoy the fish. To me this dish did not meet these standards, although I realize that I have high standards and possibly unrealistic ones.

Other Dishes
My dining companion had the Breaded Filet (spelled a different way on the check than it is on the menu) and reported that it was good. All of the dinners come with a choice of shrimp or fish fillet. They also have fish tacos, soups, shrimp cocktail, whole fish (at market price), and appetizers such as aguachiles and ceviche.

For non-fish items I only found fajitas, carne asada tacos, and some items on the Kid’s Menu (grilled cheese, cheeseburger, corn dog, etc.).

On the section of the menu labeled “Specialty” there are some items that seem to not have much fish (or maybe none at all) such as Cabos Enchiladas.

Additional Comments
The restaurant adds a surcharge to the bill if you pay by credit card, and my problem is that they did not make it easy for me to discover this fact until it had already been charged.

There were many interesting looking items on the menu that I have not yet tried, so I think it would probably merit an additional visit(s).