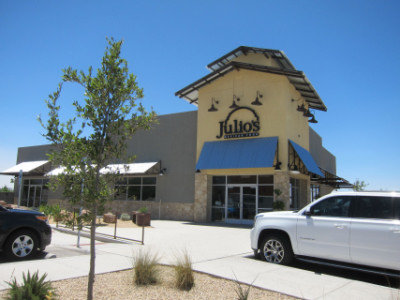 Julio’s had its beginning in 1944 in downtown Ciudad Juarez, Mexico when Julio and Guadalupe Ramirez opened an upscale Mexican restaurant (as opposed to the more numerous establishments serving tacos or street food). At that time it was called Julio’s Cafe Corona (I do not think this had anything to do with Corona Beer which is quite popular in Mexico).

When I first encountered Julio’s it had moved to the PRONAF area located across the “free bridge” at the eastern end of Ciudad Juarez. This was a popular commercial center with American style shopping centers as well as stores aimed at American tourists where “genuine” Mexican souvenirs could be purchased. The Sanborns coffee shop was nearby, as well as what I think were the city’s only two Chinese restaurants, the Shangri-La and the Lai Wa Yen (all of these other restaurants are still operating, and Paco Wong’s is the El Paso branch of Shangri-La).

I will have to say, though, that out of all of these restaurants, Julio’s was the one that I thought was the most special experience and which truly gave me a taste of Mexico. Julio’s was a little bit out of the tourist area, and seemed to cater to local tastes. It was definitely upscale, meaning that it had a full menu instead of specializing in tacos or another item that would be considered the restaurant’s specialty. At Julio’s everything was genuinely good, and there was a lot from which to choose.

One thing I considered to be upscale was the enchiladas, which seemed to be more complex than the typical ones found in Ciudad Juarez. The enchiladas at Julio’s were actually very similar to the ones served in a number of El Paso restaurants, and which I have dubbed “El Paso style” food. These had added spices and flavor than what I think are the typical Mexican style enchiladas, and I believe this is actually authentic Mexican food (but I call it El Paso style because this is the place where it is the most commonly found). Julio’s menu states that the food came from Guadalupe’s family recipes.

For a number of other items including steaks, flautas, chile relleno, etc., Julio’s is a good example of typical Chihuahua style food (referring to the State of Chihuahua). Julio’s serves upscale versions of everything on the menu, but this means they use the best cuts of meat, etc.

Julio’s has had a restaurant on Interstate 10 in east El Paso for a number of years, and sometime after this branch opened the Ciudad Juarez restaurant closed. It was explained to me that the children and grandchildren of Mr. and Mrs. Ramirez own the El Paso restaurants, and there are now three restaurants including one in far east El Paso. 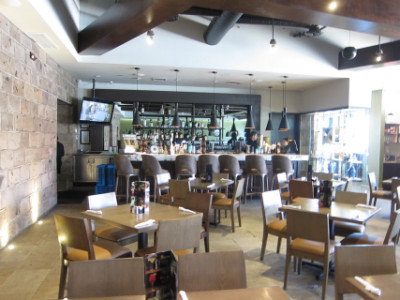 The Julio’s in west El Paso is the only one not called “Cafe Corona,” but I do not know the significance of this name change. In any case, the food not only follows the Cafe Corona tradition, but so far I think this restaurant tastes the most like the original one in Ciudad Juarez.

Julio’s opened in early 2019 and is located in an upscale commercial center called Cimarron Market. The restaurant has a choice location at the intersection of Resler and Paseo del Norte where it is visible from both of these major streets. It is about a half mile from Interstate 10, and about a mile south of Loop 375 (Trans Mountain Dr.). 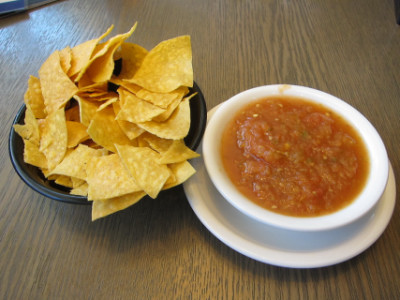 Although the Salsa was very flavorful, it was not at the El Paso level of spiciness and I believe this is definitely not the same salsa that was served in the Ciudad Juarez restaurant (the salsa I had at the I-10 location seemed to be like Julio’s original salsa).

You can order Chipotle Salsa which is definitely spicy, but they failed to tell us that it costs $1.50 (I do not mind the price, but I mind that they did not tell us). In any case, I would say this salsa is quite good and is worth the price.

The Chips were definitely among the top ones in El Paso (and this is saying a lot because El Paso chips in general are better than just about anywhere else). 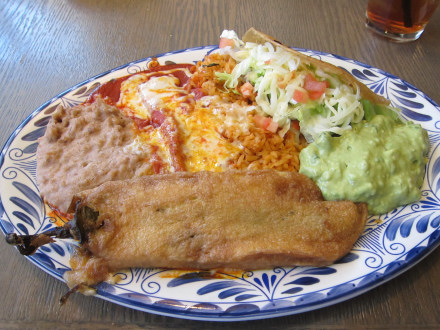 With the exception of the guacamole I think this combination plate was definitely top notch, and worthy of being called “Corona” (Spanish for “crown”). It seems that every Mexican restaurant has a “Mexican Plate” and this is not unusual for El Paso, but this is one of the better ones.

Probably my favorite item here was the Red Enchilada (the red enchilada is the default on the plate rather than the green and is the way the restaurant has been serving it since 1944). This had the classic taste of an El Paso style enchilada, although I think it was actually developed in Mexico. My explanation of this is that El Paso and Ciudad Juarez used to function as one city with people crossing the border at will (or with minimal red tape as it was when I first came to El Paso). This style of enchilada was probably not common very far south of the border, but it was widely prepared in both El Paso and Ciudad Juarez.

I also need to note that the enchilada was quite spicy (although not to the level of spicy New Mexican red chile). One issue with me is the use of cumin in the El Paso style enchiladas–I like the ones such as Julio’s where if cumin is used at all it is in a very small amount where it would be a very slight flavoring and not an overwhelming presence. To me everything was right about this enchilada, although there are several others in El Paso that are probably equally good.

The Chile Relleno was unusual for El Paso because it did not have sauce on top, and this was a good thing. I believe that a really good chile relleno does not need anything to enhance it, and that was the case here. This one had a very good chile and an even better batter for a very flavorful item. I noticed on the menu, though, that if you order a chile relleno plate it does have sauce on top (either a Spanish sauce or a spicy Mexican sauce).

The Shredded Beef Taco was also very good, although it was probably the weak point of the three main items because of the meat being a little greasy. When that is the worst thing I can say about a combination plate, though, I would rate this as an excellent plate. The Monterey Jack type of cheese on the taco was very good (I do not know, though, the exact type of cheese it had).

The beans and rice were both excellent, but probably I was more impressed with the rice because at most restaurants this is a weak point (but not here). I thought it had an excellent seasoning as well as being well cooked.

The Guacamole was somewhat bland, but was better on a subsequent visit when I had it on the flautas. As always it was very fresh, and I remember this as being one of the best items at the Interstate 10 location when my office was located nearby. 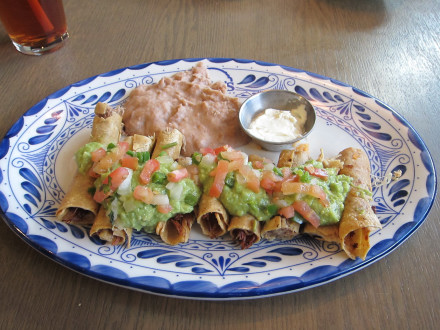 One of the most popular ways to enjoy guacamole is to have it on the Flautas Oaxaqueñas. Julio’s has several types of flautas including some with no guacamole at all (but chile con queso instead). I think the “Oaxaca” version is the one that has been the most popular through the years at Julio’s, and it is a style of flauta that is very familiar in El Paso restaurants (although most probably do not cut them up into small pieces). I am not going to argue about whether Julio’s version is better than the ones elsewhere, but the main ways to judge are with the meat (Julio’s has shredded beef or chicken), the guacamole (this is a very good one), and the crisp rolled tortillas (these were fried to a golden brown without being overcooked). These were actually three flautas cut in third so that there were nine pieces served on the plate (the other flauta with guacamole on the menu is the “long” version which is not cut into thirds). I got both shredded beef and chicken flautas on my order, and I thought the beef was particularly good.

Other Items
One of the best features of Julio’s is that it has some of the more upscale items that I like to seek out and which are not on the menus of many restaurants. I have found several of these in the section of the menu called “Julio’s Specialties” (they say these are original recipes that date back to 1944). The Corona Mexican Plate is listed in this section, and I ordered it first for the sake of nostalgia.

Some others, though, include the following:

This is not a complete list of everything that looks good, but these are some of the items I seek out in upscale Mexican restaurants across the country when I have a chance to try them and enough of an appetite that I can order them.

Julio’s also has a section on the menu noted as “Our Classics” which include Flautas, Tacos, & Tostadas. One item I noted was the flautas, which I had at the Gateway East (I-10) location and enjoyed very much. In addition, though, they have chile con queso flautas which I do not remember ordering previously, but this was one of my favorite dishes at the now closed Casa Jurado (and I think this is a classic El Paso dish).

Other Locations
The Ciudad Juarez restaurant is no longer open, but the other El Paso locations are at 8050 Gateway Blvd. East (Interstate 10) and 3630 Joe Battle Blvd. (Loop 375).

Closing Comments
The restaurant is upscale, but the prices for common dishes (such as the Mexican plate) are not out of line with other restaurants that are not as upscale. Julio’s does raise the price of most bills, though, because of things like charging somewhat high prices for drinks and having an extra charge for the chipotle salsa.

This restaurant seems to have been built with an eye to the future because it is on the fringe of the city in a location that it seems few people know about. Yelp reviews indicated that after it opened they were trying to get their act together in terms of customer service, but when I went it seemed that they had successfully worked this out.

I think this restaurant has a very good concept–it has kept the traditional recipes of Cafe Corona but serves them in a modernized building and setting. It appears that the menu has also been somewhat updated and I think this is fine–all the old Cafe Corona classics seem to be here as well.