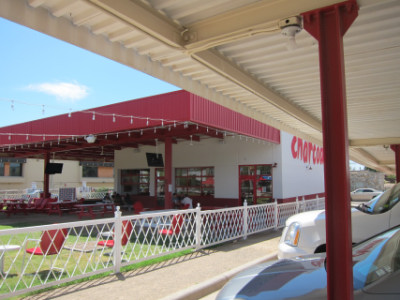 Charcoaler Drive-In has a long history in El Paso, and originally had locations on Montana as well as the present location on Mesa. It was definitely one of my favorite places for hamburgers in town, and was modeled after the Charcoal Oven in Oklahoma City which was one of my frequent haunts during high school and afterwards. The original owners of Charcoaler were friends of the people who operated the OKC Charcoal Oven, and apparently there was a sharing of the methodology used to cook the burgers and to make the barbecue sauce which is popular at the Charcoaler.

Both of these restaurants were drive-through only, and they provided awnings where you could eat in the car. The Charcoal Oven in Oklahoma City and Charcoaler in El Paso closed at about the same time, but both have now come back to life with new owners. In the case of Charcoaler it is still at the same location on Mesa Street, but several enhancements have been made including an indoor dining room and outdoor picnic tables with a play area for the kids. I think they tweaked the menu a bit but the main attraction is still the hamburgers.

At Charcoaler you get the flavor of hamburgers cooked over charcoal (possibly combined with cooking over gas but I do not know the exact process). I just know that this is what makes the burgers so good, and the barbecue sauce available as a topping makes it even better. 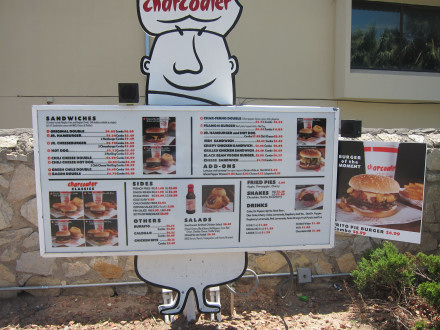 There is still a drive-through entrance at the restaurant where you can order from the car, and the food is the same whether it comes the traditional way or from the new sit-down dining room which you can access through what used to be the exit only driveway to Mesa Street. I much prefer the sit-down arrangement, mainly because you place your order directly with a person rather than through a speaker.

I think the burgers are smaller than before, but this can be remedied by ordering the double burger. I have resorted to getting a single burger and a hot dog in the same meal but this really gives me more than I need to be full (it is a taste treat, though). 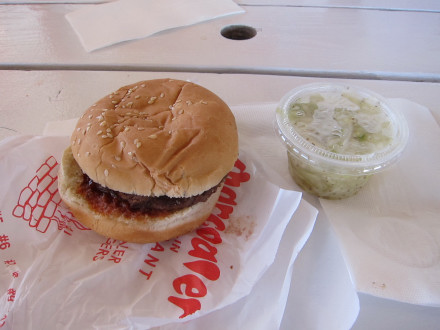 The Hamburger is the main attraction here. I find both the charcoal broiled style of cooking and the barbecue sauce to make it a special treat. The one shown in the photo is the “Junior Hamburger” (with a single patty). Its diameter is not much larger than the container of cole slaw I ordered, but it does have a good flavor. 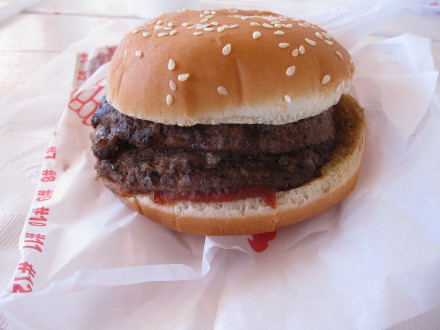 The employees seem to encourage people to order a double patty, and I think many customers are on the same wavelength that I am about the double burger being the right size for a meal.

Whether I get a single or a double, though, I have always ordered them with the barbecue sauce. This sauce is much like the sauce used in many Oklahoma City hamburger restaurants, but I believe its actual origin was OKC’s Charcoal Oven.

There is always the traditional mustard, mayonnaise, etc. available for those who prefer it this way.

For a side dish I recommend the French Fries. I have been impressed by the flavor and lack of greasiness of the fries–the size of the order is fairly small but for me it is enough.

The Cole Slaw I ordered was a little lackluster in the flavor department and of course it will not fill you up the way the french fries will do. I suppose it is more healthy, but the issue for me is that there are many restaurants in El Paso that have better cole slaw than here, but only a small number that have better fries. 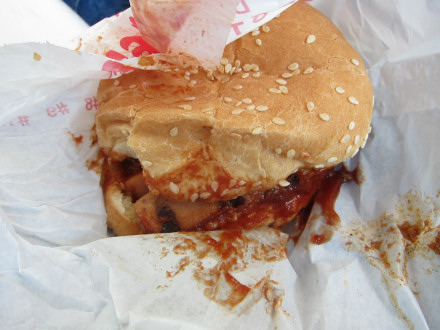 Hot Dogs can also make a meal but for me the regular (small) order is not quite large enough if I have my regular appetite. Because of the charcoal broiling I think this is a better tasting hot dog than most. It is good with either the barbecue sauce or the chili (this is Texas style chili rather than the “chile” they have in New Mexico). 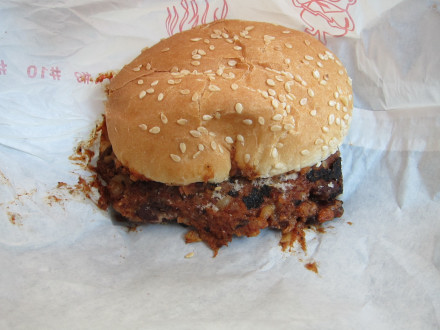 I tried the Black Bean Veggie Burger, but to me there were so many things wrong with it that it is likely off of my list of possible choices in the future. On the flavor I think there was something wrong with the way it was composed–probably all the ingredients were good but the way they were combined was not quite right. I like black beans as a filler in a veggie burger but perhaps there was a little too much of it here. The consistency was really the worst part, though, because it fell apart and did not hold together as a patty should. The patty had a very sharp taste which I found to be improved by the barbecue sauce which I ordered as a topping.

The other choices from the menu are limited but they do have chicken and fish sandwiches, as well as caldillo and burritos.

My only holdover recommendation from the old restaurant that I have not tried at the new one is the milk shake, but the iced tea is very good as well (and it is easy to get refills when you eat in the dining room or the patio). Theoretically those using the drive-through get free refills on tea or soft drinks as well, but I found the logistics of it to be a little difficult.

In A Nutshell
I believe the food is the same as it was at the “old” Charcoaler, except for the fact that the sandwiches are smaller. Many like the double burger, but an alternative would be to get two small sandwiches if you want to get what I consider to me a normal sized meal.

Although the drive-through lane has been the way people have been placing their orders since the restaurant opened, I believe the new indoor dining room which opened in summer 2019 makes Charcoaler much more attractive and much more customer friendly.

I grew up with the type of charcoal broiled burgers they serve here. The more I travel, though, the more I find this style of burger to still be one of the best, and I am happy that it is available in El Paso.