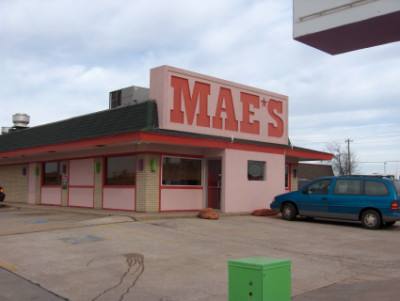 One of the reasons people like to live in small towns is so that they can experience the type of food served at Mae’s Home Cooking, food that is done in only slight alterations from the way it would be made in their own kitchens. With only about 20 tables and waitresses who seem to be here for the joy of interacting with customers more than the money that is earned, the economics of large cities seem to make this kind of eatery impossible in settings other than rural America.

Yukon is actually a bedroom community of Oklahoma City and is blessed with a number of urban amenities. It has tried hard, though, to maintain the sense of community and “small town” that has existed since its founding. This includes going to the local diner to eat, reading the newspaper, and sitting over a cup of coffee to chat with friends or family members. Yukon has several “diners,” local establishments that are not dictated by the edicts of corporate offices from out of town (although Sid’s Diner is a branch of the one in El Reno, the county seat located about fifteen miles away). Mae’s seems considerably more upscale than Sid’s in the menu and the setting, although since I visited Mae’s first I cannot yet compare the food.

Mae’s serves hamburgers, but I did not get the feeling that this was its specialty (I think most people go to Sid’s for their onion fried burgers). The menu at Mae’s is varied, with American style dinners, sandwiches, and breakfasts. Just about everything I expected to be offered at this type of restaurant was listed on the menu.

Salad
Mae’s is not big on soups and salads. I asked about the soup but was told they were out (I think one kind had been made earlier in the day).

I ordered a Dinner Salad that came with iceberg lettuce topped with grated cheddar cheese. The pale color of the lettuce made it look more unappetizing than it turned out to be, with the lettuce being fresh to the point that I really thought it was enjoyable. The cheese and ranch dressing were both good, with red ripe tomatoes adding flavor. 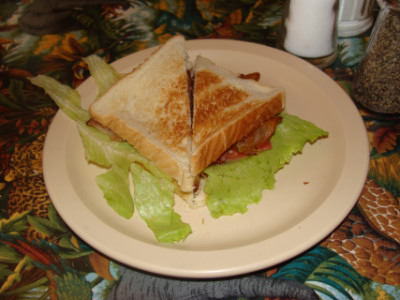 B. L. T. (bacon, lettuce, and tomato sandwich, of course, but it was unnecessary to write it out on the menu) was one of the sandwiches offered. I will have to say that one of the things, and perhaps the only major thing, I look for in this sandwich is the correct texture. The bread on this one was toasted just right and the bacon was neither too hard nor too greasy. The lettuce could have been more green but was fresh. Tomatoes were good but in small bits that were barely noticeable. I was glad to see it served dry with no mayonnaise (without asking for it to be this way). What I remember most was the flavorful bacon cooked the right way. The only thing I would wish for is more tomato.

Pies
Three Pies were available, and I tried chocolate (actually I took it home and ate it later). Everything was good but nothing really stood out in terms of having great crust, filling, or topping. It takes a lot to impress me with pie so I will say the one here was “enjoyable.” It certainly was better than quite a few I have had in Oklahoma City. 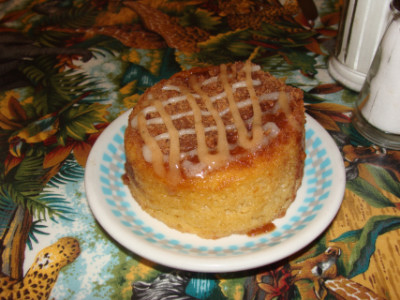 Apple Streudl was more memorable than the pie, perhaps having its roots in Yukon’s Czech heritage. I think it was because it had a lot of flavor to go along with the sweetness.

Directions
Mae’s is located on Route 66 (Main St.) five blocks east of Cornwell Dr. This is about two miles north of Interstate 40 (take either the Cornwell/Czech Hall or Mustang Rd. exit).

The “Sid’s” mentioned in the article is now “Fat Elvus” (although the original Sid’s is still open in El Reno).