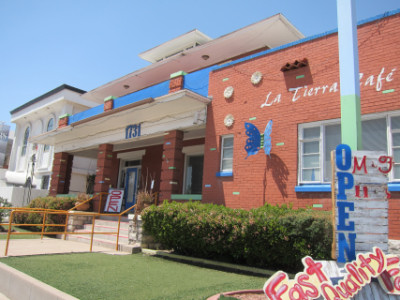 Inni Heart is a “New American” restaurant with an emphasis on freshness and quality (I am old enough to remember when this was the “regular American” food with the newcomer being the fast food restaurants). Another characteristic of “New American” food is that it is local, and in El Paso that inevitably involves Mexican food or some aspect of it. Although Inni Heart has some Mexican dishes, it seems to be more of a Mexican influenced cuisine with items such as chicken-chipotle spaghetti squash.

The enchilada plate I ordered is not traditional Mexican food, or at least it is not traditional for the border area. Chips and salsa are not served with meals, and the traditional rice and beans are replaced with more healthy options. Other Mexican dishes are available, but mostly it seemed to be healthy American food (I do not know if fried food is totally lacking or if it is just not prominent).

The restaurant used to be called La Tierra Cafe, but it was explained to me that they had a complaint by another restaurant in Texas named La Tierra so this restaurant changed its name. I do not know the whole story, but this is the reason it has its official name and the somewhat unofficial one of La Tierra by which most of the locals know it. 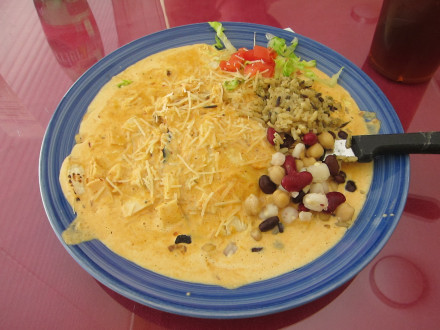 Although Creamy Chipotle Chicken Enchiladas are not a traditional border style Mexican dish, this was in essence true Mexican, and was one of the best enchilada plates I have ever tried. What I liked best about it was that they found a way to blend the chipotle into the dish without making it too spicy or giving it too much of a chipotle flavor so that all the other flavors came through. Inni Heart is a very casual lunch place, but this dish was really worthy of being served in a fine dining Mexican restaurant where they would charge correspondingly high prices.

Other Menu Items
Other Mexican dishes are also available, as well as some that are a fusion of Mexican and American food. You do not get chips and salsa with the meals and side dishes have been upgraded from the typical beans and rice.

They also serve sandwiches, salads, and other dishes that are strictly American, although the theme for all the food here is that it is more healthy than you would typically find at other restaurants. 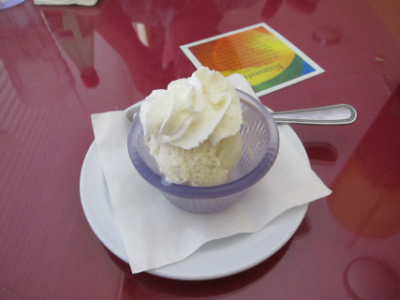 I cannot imagine how the Ice Cream fits the “healthy” theme of the restaurant, except for the fact that it tasted home made without the normal long list of added ingredients you normally see on an ice cream package. In fact, judging from the flavor I would say that it is definitely home made.

Overall Comments
The prices are a little bit high for El Paso, but low compared to comparable food I have had in other cities. Inni Heart may be comparable to other “healthy food” restaurants, but I found the flavor of the chipotle enchiladas to be totally unique in my Mexican food experience. These were truly some of the best enchiladas I have ever tasted, and definitely were the best chipotle enchiladas I have had.

Down sides of the restaurant definitely include the limited hours, but also I would say the menu is fairly limited (especially when it comes to Mexican food). I did not see any daily specials that are usually very good in this type of restaurant (since they concentrate on fresh ingredients and locally available products). Yelp says they do have a daily soup and sandwich combination, though.

Honestly, though, the food is so good the only criticism I can make is that I wish they had more items that I could choose.