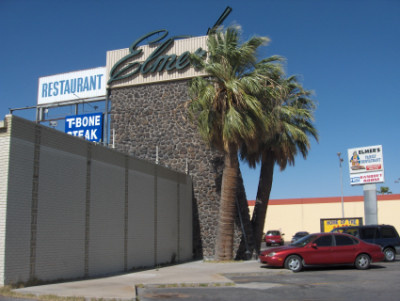 Established in 1959, Elmer’s seems to have discovered a “time warp” whereby nothing inside the restaurant ever ages. It is still the same 1950’s era diner style family restaurant complete with leather booths, salad bar, juke box, and a pie display case. The waitresses are the only thing in the restaurant that do not look as if they are left over from the fifties. Customers are treated with the same friendliness that the ones among us who are nostalgic would have expected a half century ago. 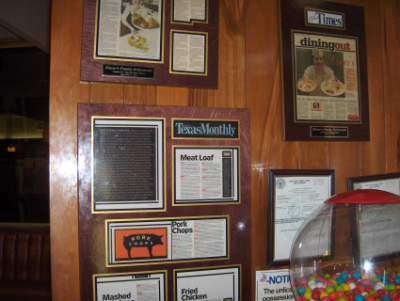 Some of Elmer’s awards on display

The food is also a throwback to the 50’s and 60’s, when there was no such thing as “healthy” restaurant food and restaurants did not have cuisine that was as specialized as it is today. Elmer’s became popular by serving both Mexican and American food, and a wide variety of each, so each person in a family could get what they wanted. If desired a person may order a Mexican plate with a salad bar or an American dish served with chips and salsa. 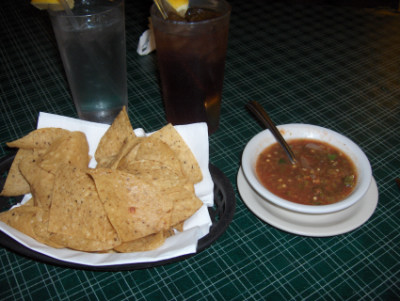 Even though Elmer’s serves just about every type of food, I have usually stuck with the specialties– red enchiladas, fried chicken, and breakfast dishes. This is probably not a great restaurant for American food– because of the fact that most things are fried this is not the type of food I would normally eat at home (but it is one of the few options for American food in El Paso). With the exception of enchiladas and a few other items it is probably not a great place for Mexican food either. It is a place, though, where both are served, and in this sense it is somewhat unique. 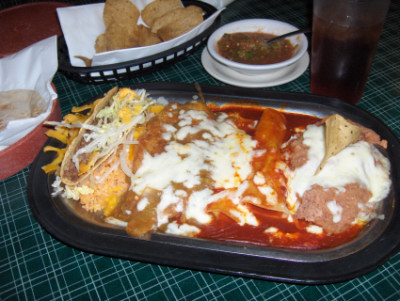 The Red Enchiladas served at Elmer’s are some of the best in El Paso. While there is nothing exceptional about them, it is rather strange that so many restaurants in the city fail to make enchiladas that match up with Elmer’s and the handful of other restaurants that set the standard for this dish. The red chile at Elmer’s is spicy but not overly so, and they have the deep red flavor and color that is almost New Mexico style. The cheese is Mexican style, and this is just a good all-around enchilada.

The Chile Relleno is good by El Paso standards, but still a little greasy. It is topped with green chile that is flavorful but pretty generic. The main thing I did not like about it was the chile relleno itself– the topping neither detracted nor added much to the enjoyment of the dish.

The Beef Taco was plain and lightly spiced but good quality. It comes as part of the Mexican plate, which I would recommend as a way to try a variety of Mexican items.

Refried Beans were flavorful and not greasy. I would guess that they are cooked in vegetable oil. The Rice was not very flavorful, and could have been a lot better.

Fried Chicken
Fried chicken is the most famous dish here, and the menu proclaims it is the “best in the Southwest.” I might believe it is the best in El Paso, mainly for lack of competition, but I found it dry with a thick, greasy crust (a lighter crust might be better). The main disappointment came from the side dishes, though, since the whole point of eating fried chicken is to have a “fried chicken DINNER” (not just the chicken itself). It’s cheap, though, and well worth what you pay.

Additional Comments
Mexican breakfast dishes likewise are excellent and cheap– not the best in the city, but definitely better than average.

I have been going to Elmer’s for so many years I was afraid my past experiences might cause me to overlook some of its current shortcomings. The food I have eaten recently, though, has been pretty much like it always has been, so the shortcomings of Elmer’s have probably been there from the beginning. The good thing about Elmer’s is that you get exactly what you expect– a diner style restaurant that is better than the chain restaurants and less expensive. 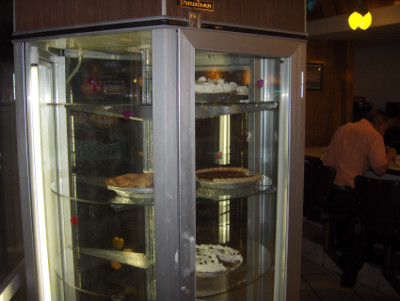 To go along with the mix of Mexican and American food, customers will likely want a slice of Elmer’s pie. The pie display located next to the front door creates a double temptation, both when entering the restaurant and before leaving. Several varieties beckon the diner, and few are able to resist.