The reason I am resurrecting this old review is that I found the restaurant’s salsa for sale in jars at the Eagle Ranch Gift Shop on the Plaza in Mesilla, New Mexico (just outside of Las Cruces). I am figuring it is available elsewhere in the state as well. 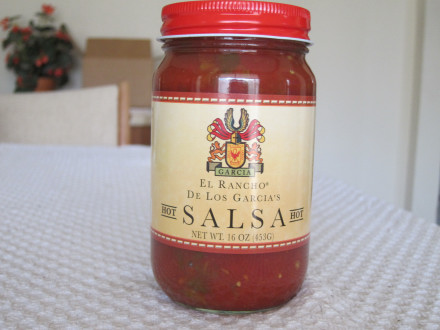 The hot salsa from El Rancho Restaurant in Portales, NM

Called El Rancho de Los Garcia’s Salsa, the Eagle Ranch Gift Shop in Mesilla had three versions for sale–mild, medium, and hot. I bought the hot one but it proved to be almost too hot for me to eat (although I have never found a salsa that was totally impossible). I was really surprised about this considering how mild the food was when I ate at the restaurant.

As far as the flavor is concerned, I think this is legit New Mexican salsa. Not all of the State’s salsa is the same, but as a whole I think it is better than even most of the “good” salsas found in other states (not to mention the ones that are purposely dumbed down).

My sampling of this salsa followed the one from El Bruno’s Restaurant in Cuba, New Mexico, so I can at least compare these two. I thought El Bruno’s had the better flavor, and not just because it was not quite as hot. El Bruno’s salsa was made with both New Mexico green chile and jalapeño, while El Rancho’s only has jalapeño. I am really surprised El Rancho’s is as good as it is considering it does not have the regular green chile, but I still would give the edge to El Bruno’s in terms of flavor. I do not think El Bruno’s is available in El Paso or Las Cruces, though, and the one from El Rancho is certainly one that I would like to buy again (although probably the medium version next time).

Additional Comments
On the jar of salsa it says that the Garcia family has been serving New Mexican cuisine since 1975. It now may be one of the State’s longest running New Mexican restaurants run by the same family, and for this it deserves recognition. I think the salsa it sells will be good advertisement for the restaurant because it is, in fact, a very good salsa.

El Rancho’s web site states that their chef has twenty years of experience cooking in the finest restaurants, and that “our chef is excited to present their vision to you and all our guests.” This makes me think that they may well have fixed what I consider to be their weak link at the time I visited–the heat element of the food. Even the best New Mexican restaurants I have visited in Southeastern New Mexico have not been as spicy as in Albuquerque and Santa Fe, but there is some kick to the chile they serve. I really do not know what El Rancho is doing now but I suspect the food is pretty good, and much of this speculation is based on the salsa that I tried.