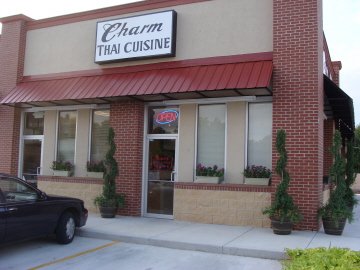 Update Sep. 2020: Charm Thai is only serving takeout, or you can get delivery through one of the restaurant delivery services.

Charm Thai Cuisine is one of my favorite Thai restaurants in Oklahoma City, and I have yet to find anything that I can really say is disappointing. I have my favorite items here, but when I try new dishes it seems that they are always ones that I also want to order again.

At the beginning of 2013 Charm Thai had a change of ownership, and I think the new owners have made a good restaurant even better. Some of the dishes reviewed here were from the “old” restaurant, and I will make note of this, but my opinion is that there was not a drastic change in the restaurant after the ownership change. I think some of the more Americanized dishes were eliminated in 2013, although for the most part I did not notice much change in the items served or the flavors. Most notably there was a dish called pad preaw wan (sweet and sour) which I can no longer find on the menu that might be called a more Americanized dish (but if it is in fact a Thai dish, it is one which the new owners apparently have chosen not to offer). 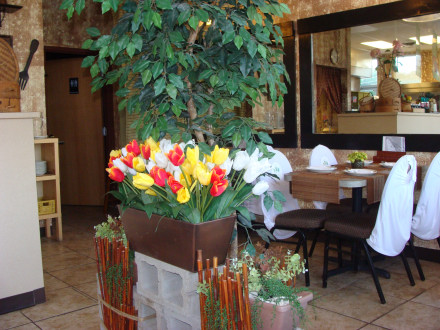 This is a small restaurant that I have seen crowded but never so full that the tables are completely occupied. I expect occasional waits at “mom and pop” restaurants, though, as the tradeoff for the type of home style food they prepare.

Lunch Specials
Lunch specials on Monday through Friday are a “Lunch Combo Menu” which has the same five choices for an entree selection every day (pad thai, spicy basil, vegetables, cashew, or ginger). The type of curry served with it is different every day, and the choice of dumpling or spring roll also changes. You also get a complementary bowl of soup as an appetizer. I generally think the lunches are a very good deal, although it is not as much a matter of saving much money as it is that you get a variety of different items. 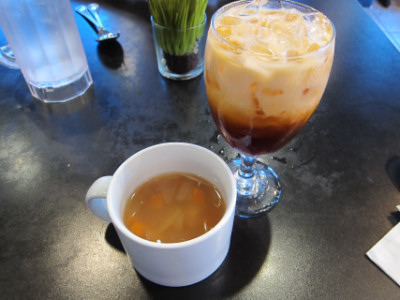 The Vegetable Soup served with the lunch combos is probably my favorite because of its sour flavor component that makes is somewhat like hot and sour soup but without the “hot” part. 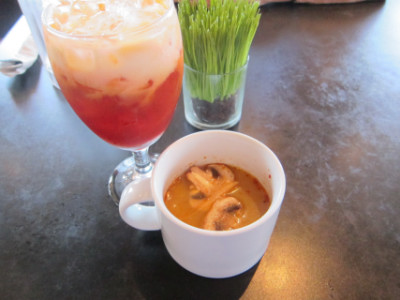 Chicken Soup is another of the ones served with the lunch combo. This one was good because of the mushrooms that were included. 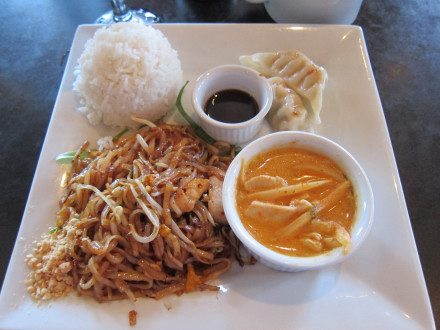 Yellow Curry is probably my favorite of the curries served here, and it is included in the lunch combo on Fridays. Surprisingly the curry was less spicy than the soup served on this day (chicken soup) but none of the food served for lunch is “Thai spicy,” and you do not seem to get a choice about how spicy they prepare the lunches (this would be different if you ordered from the regular menu).

The main item (pad thai) is totally optional, and is one of the five entree selections that are available. In addition you can choose the default chicken or get tofu, beef, or shrimp for an extra charge.

I generally consider that Tana Thai has the best Pad Thai in town, and I made a note that the one at Charm Thai was sweeter and had a more complex flavor. This is both good (the complex flavor) and bad (the sweeter flavor) so I am not sure which one is actually better, but I am sure that I like them both. 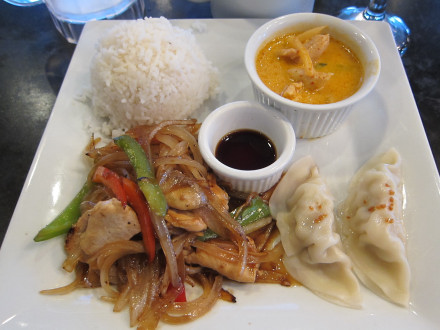 The Ginger Chicken for lunch is much like the ginger stir-fry from the regular menu except that it comes non-spicy by default. Chicken is also the default although you can get it with other meats or no meat (tofu) for an extra charge. 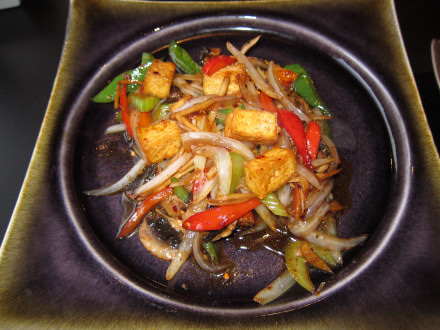 The Ginger Stir Fry (pad khing) is always one of my favorite dishes, and the one here lived up to my expectations. The sauce was flavorful and it had a good balance of flavors. The biggest negative of the dish is the vegetables that are included, although it does have some good mushrooms. I would say go ahead and order it–the tofu or meat that comes with it will make it satisfying.

I also prefer the dinner over the lunch version because I can choose a higher spice level (although the time I ordered it for lunch I did not ask if the spice level can be adjusted). 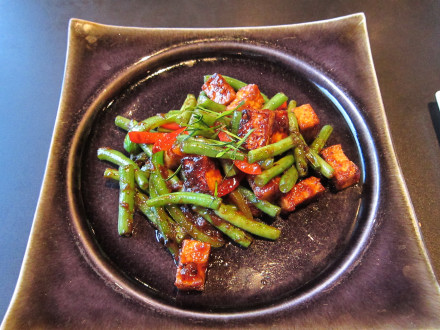 To me an even better dish is the Pad Prik Khing, usually my yardstick for measuring the food at Thai restaurants. In this case it was very good, with the green beans being fresh and crunchy (and there were a lot of them). The curry paste (curry without the coconut milk) was very flavorful, and this dish definitely had everything I expected. 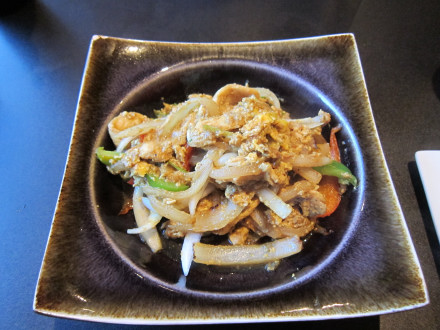 Curry Delight was a dish from before 2013 that I enjoyed, but not so much that I was disappointed to see it dropped from the menu. It was high in flavor, but I am not sure what type of curry was used (and the current menu has several types of curry). 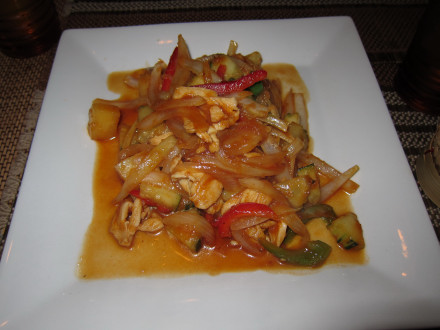 Pad Preaw Wan was a Thai style sweet and sour dish from the old menu, and contained both of these flavors (as opposed to the more common sauces which are just sweet). I am not sure whether or not a similar dish is available at present. 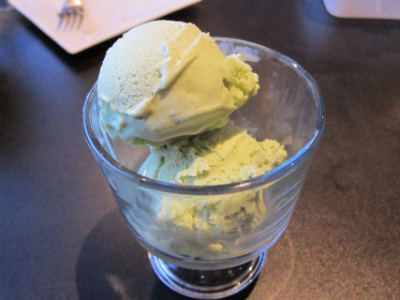 Green Tea Ice Cream makes a good aftercourse to a spicy meal, or just a better than average dish of ice cream.

Takeout Orders
My most recent order was a takeout version but I was able to compare the food with some other restaurants. The Pad Prik Khing was very good as always, with the sauce being a key reason for this. It had a thin sauce that did not look as much like a curry paste as I find at some restaurants, but the flavor was excellent.

I also tried the Panang Curry which had a good flavor and a good balance (including the fact that it was not too thick or too runny). This was a very good version of the dish.

Some Cons and (Mostly) Pros
The menu at Charm Thai is fairly limited, which would be a negative except for the fact that I can always find something I like. The restaurant is small, but I have never been left to wait for a table to become available. Some dishes have smaller than average portion sizes, but this corrects a major flaw I find at many restaurants where they serve oversized plates (and at Charm Thai you might want to order extra rice if the dinners are not filling enough).

My favorite Thai dishes are usually ginger stir-fry and pad prik khing, and at Charm Thai these are both excellent (I would have said these were the best in the city until I went to Thai Delight in Edmond, so now it is somewhat of a toss-up between these two restaurants).

The restaurant always asks me to choose my own spice level on the dinners. This is probably a positive because the lunches (which have the default level) are mostly not spicy enough for my taste. It is definitely a positive that when I order a certain spice level the food comes out very close to what I had expected.

Of course the main reason to come here is the excellent flavor of the food. I think other Thai restaurants deliver quality food as well, but few are as consistent with all items on the menu as Charm Thai.

The food here is also free from MSG, which contradicts the notion that it should be added as a flavor enhancer (I do not know how the food could be much more flavorful than it is at Charm Thai). 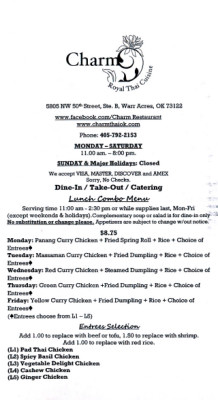 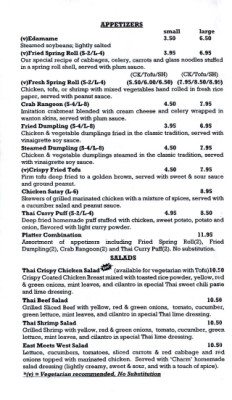 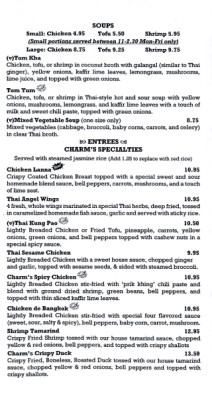 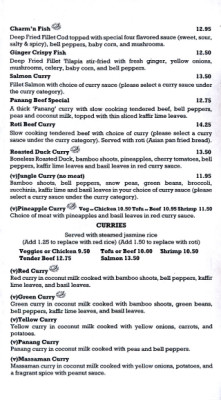 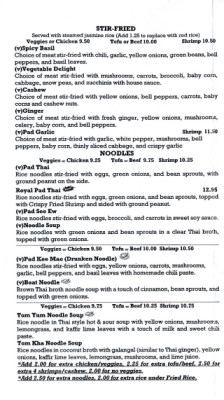 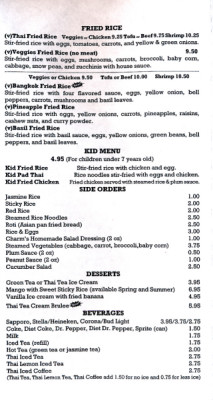