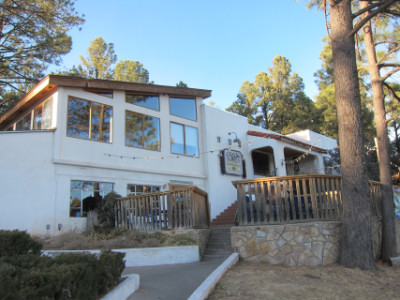 The problem with finding good Mexican food in a tourist town such as Ruidoso is that I do not always trust the reviews. Good reviews about a restaurant may be significant, or they could just reflect the fact that the food is better than in the reviewer’s home town. When I went to Casa Blanca it was really the old fashioned way–by trial and error like I did when there were no reviews. Fortunately, it was no error to come here. Casa Blanca has very solid New Mexican cuisine and I think rates as one of the best in southeast New Mexico.

The building is laid out with the restaurant on the top floor and the bar on the bottom. Patrons can go to the bar on the lower level or order drinks in the restaurant (servers bring the drinks up a flight of stairs to patrons). I did not find out until I was inside that I could avoid the long stairway in front of the building by parking in the back and using a ramp which goes to the rear of the restaurant. Either way I welcome the exercise I get in Ruidoso while breathing the mountain air. 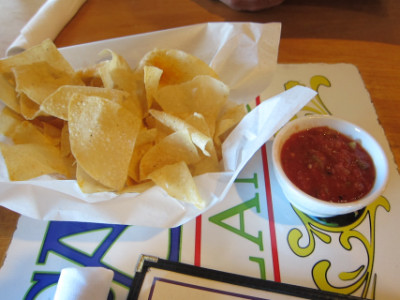 The Salsa had a rich flavor typical of New Mexico and was perhaps less spicy than many others, but was not the typical bland salsa I find in many tourist restaurants either. The chips were excellent as well. 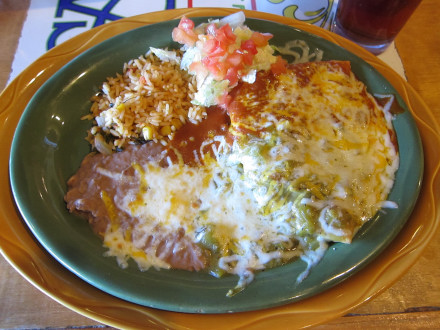 The Stuffed Sopapillas here are huge, and one makes a substantial meal. I ordered the “Christmas” version with both red and green chile, and I was happy to get a fairly spicy version of both (although this is not the type of spicy chile that numbs your mouth). Usually my preference is for red chile, but at Casa Blanca I felt that the green was clearly more flavorful and had more of a pure chile taste (mixed with cheese, of course).

The stuffing was ground beef because I wanted a traditional taste for this dish (which is usually beef). They do have other options, though, and I think if you can order shredded beef this would be preferable (but this was not one of the choices listed on the menu).

Other Notes
Food automatically seems to taste better in a mountain setting where there is no time constraint for eating your meal. Having said that, this was a genuinely good New Mexican meal. 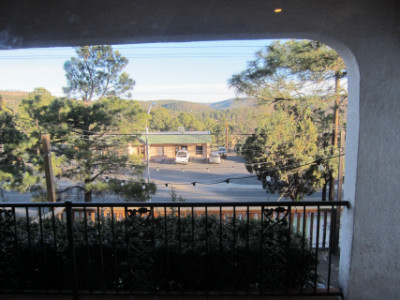 View of Ruidoso from the window

I am somewhat of a stuffed sopapilla fanatic and generally like them better than enchiladas, but of course there are other choices available besides either of these. For items with chile I would recommend the green here, although I liked the red one also. Anyone who is not sure about the chile can order both of them on the side and decide which one to use after sampling them.

I have to say that this is definitely one of the best New Mexican restaurants I have found in the southeastern part of the state, and I think even better than Casa de Sueños in Tularosa. I found Chef Lupe’s in Ruidoso to be very good for Mexican style Mexican food, but now I know a good one for New Mexican cuisine as well.