The designation of this Carlos & Mickey’s as the “Airport” location is no exaggeration, with it actually being in the Terminal. I was told that there were two locations at the Airport–this restaurant downstairs and a food court style restaurant upstairs near the loading gates.

Even the downstairs restaurant is an “express” location that has a smaller menu than the other Carlos & Mickey’s restaurants in El Paso. Some other experiences of eating Mexican food at airports gave me the feeling that you do not quite get the same thing with airport locations of restaurants that is available if you go to the original location (a major exception to this was at LAX which was so many years ago that I do not remember the details).

Probably the important factor here is how the food compares to the other Carlos & Mickey’s Restaurants in the city. The menu is definitely abbreviated here, and I did not see the combination plates I have ordered at the other restaurants. Because of time constraints I really was not even interested in a meal like this, but I just wanted something quick that would taste good. They certainly met all of my expectations for good food and good service. I was pleased with everything, and I certainly feel that the restaurant has some of their top people working at the Airport location.

The original Los Bandidos de Carlos & Mickey’s is actually located very near the Airport and I have always looked at it as a place that is popular for its bar and entertainment (such as mariachis which I think they have on weekends). The food is very good also, and gives people a sample of the unique style of Mexican food found in El Paso (which cannot be labeled as “Tex-Mex” or New Mexican cuisine, but is closely related to the food in the Land of Enchantment in the chile it uses but otherwise I think has its roots in northern Mexico).

To me the Airport Carlos & Mickey’s seems like a successful Airport outpost of the main restaurant given that people have time constraints and many travelers who happen in may not be familiar with the El Paso style of Mexican cuisine. In my experience the “El Paso flavor” is popular with just about everyone who tries it, the spice level is not outrageous for most people, and of course it certainly is not the typical “Tex-Mex” food. For many items Carlos & Mickey’s is near the top in the city for the flavor and quality of the food served, and this seems to be a good restaurant for El Paso to have as its Mexican food representative at the Airport. 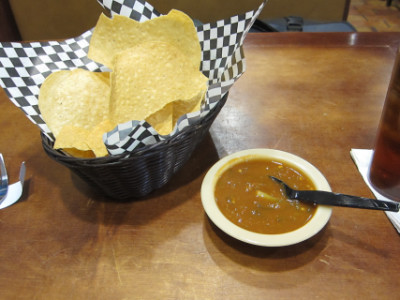 The Chips are whole corn tortillas that have been toasted, but in flavor and texture are like most of the ones served in El Paso restaurants.

The Salsa has a good spiciness, but I do not think it will have too much for most people. 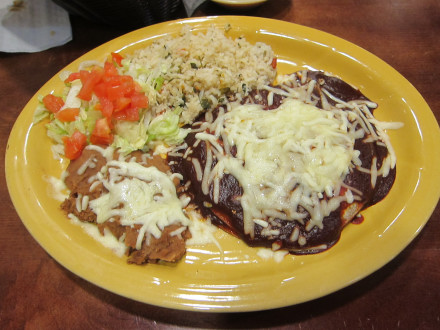 Red Enchiladas are what I usually order at El Paso Mexican restaurants when I either do not have time or the appetite for a combination plate, and I just want the very best flavor. At my visit to the Airport I had a time constraint, and I was not disappointed with the choice I made of this dish.

The Red Enchiladas here had a very good flavored red chile, and were spicy to about the “4 chile” level without being too spicy. For some reason the red chile at Carlos & Mickey’s has a somewhat vinegary taste. This is a little out of the mainstream for El Paso Mexican food, but I have had others with a similar flavor (particularly where the restaurants or the chefs were from Ciudad Juarez). I would also describe it as an earthy flavor, as if they merely ground up the chile pods and this were all you are eating (but of course this is an exaggeration merely to try to describe the flavor). I also liked the fact that the enchiladas were served flat–a technique that gives you more of the chile flavor than when they are served as rolled enchiladas. There was enough cheese sprinkled on top so that the cheese flavor was not lacking either.

The rice and beans at Carlos & Mickey’s are both very good (I probably like the beans better).

After some recent inconsistent experiences I have had at the Montwood Carlos & Mickey’s, it was refreshing to find food at the Airport restaurant that matched the good ones I have had on Montwood, as well as the ones I remember from the main location on Magruder. I make the disclaimer that I have only visited the Airport location one time, and it may have its own inconsistencies, but my meal was as good as any I have had at the other Carlos & Mickey’s locations.

Other Items
Items I have enjoyed at the other restaurants include the chile relleno and the shredded beef taco.

Additional Comments
At Carlos & Mickey’s I have never cared for the green enchiladas as much as the red, and my favorite meals have usually been the combination plate that has red enchiladas along with other items. My Airport experience, though, confirmed that the red enchiladas are really my favorite item at Carlos & Mickey’s, and are the one thing I would like to get if I did not have time or the appetite for a combination plate.

To me it looked as if the Airport location only offers a few of Carlos & Mickey’s items (they are probably the ones that are the most popular and which can be served quickly). The service was very good, and the experience was the opposite (in a good way) of what I thought it would be from eating “airport food.”