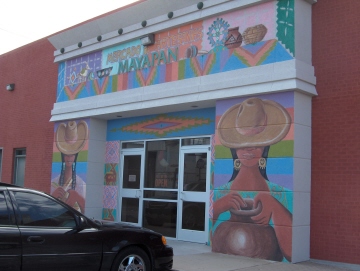 Cafe Mayapan entrance to the mercado on the east side

Café Mayapán is more than just a restaurant, it is part of a nonprofit organization that provides job training and neighborhood revitalization as well as being part of a complex of businesses located in an old warehouse. The idea of Café Mayapán was to employ some of the displaced workers from the old factory where the restaurant is now located. Next door is a mercado selling arts and crafts, with several community organizations housed elsewhere in the building. 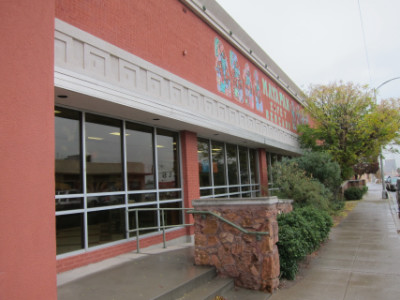 Cafe Mayapan entrance to the restaurant on the north side

Café Mayapán knows it is in a tough neighborhood to serve dinner, and is only open on Monday through Saturday at the lunch period (and Saturday for breakfast). I do not think many customers come to Café Mayapán strictly out of sympathy for the cause it represents, rather they are coming for some of the highest quality Mexican food in El Paso. I have to admire them for not serving the same type of food that can be found at numerous restaurants throughout the city. El Paso style food has its merits with hot chiles and robust flavors, but it is not the only type of Mexican food that exists. The style of food served in the interior of Mexico is quite hard to find in the borderland, but it is the theme of Café Mayapán. I cannot identify a specific state in Mexico as the source for the recipes used, instead I think the recipes come from the women who work in the kitchen as well as those who are involved in La Mujer Obrera (the organization which runs the restaurant and the non-profit organization). 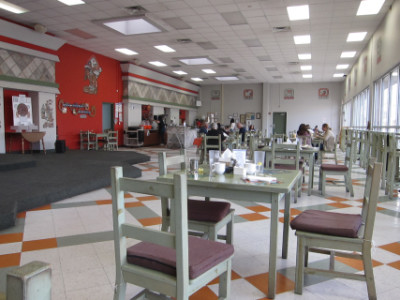 The interior is quite spacious and probably could accommodate many more tables than are here, but room was left for a stage where mariachis were performing on Fridays and other groups occasionally provided entertainment (after Covid I am not sure they still have entertainment). Now the large room has proven to be good for social distancing between tables. The restaurant uses traditional wooden furniture with comfortable pads to make it easy to spend a leisurely meal. A counter is available for takeout, but those wanting a regular meal can order at the table. Service is fast, as I found out when I have had limited time for lunch.

It seems that after the Covid pandemic the restaurant also saw an opportunity to upgrade the food. It has been very good since the restaurant opened, but previously the menu was mostly the favorites served in El Paso but upgraded a bit and with a better flavor. The special dishes from interior regions of Mexico were on special menus that they served occasionally, although I think every time I went except once there was something of this type available.

Starting about the beginning of 2022 (when dine-in service was reinstated) it has seemed that the entire menu has been upgraded, and they have more of the type of food that is never seen in El Paso restaurants, but which would be served in alta cocina restaurants in the interior of Mexico. I think the special menus have been replaced by the fact that there are special dishes every day, but just not the same ones every day. 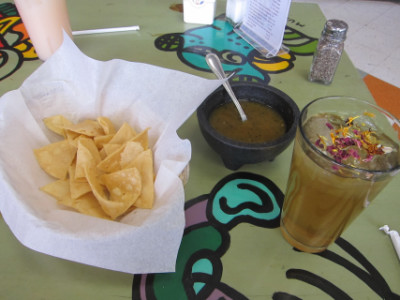 All customers are given complimentary Chips that offer the first sign of the quality and home made flavor found at Café Mayapán. These are thick and about as non-greasy as you can find.

The Salsa is a puréed style with green chiles and a mix of spices that make it one of the better ones served in the city.

I am also using this photo to show the herbal tea, one of the drink choices that are available. 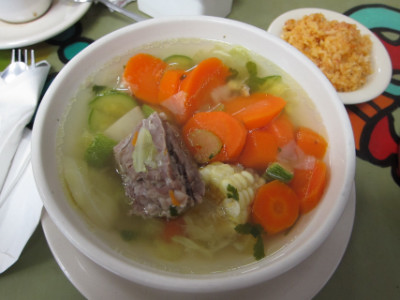 To me a sign of a good Mexican restaurant is that it serves good soup. At Café Mayapán the soups go beyond good; they are representative of the traditional soups found in central Mexico and are as much of an educational experience to borderland residents who are generally limited to caldo de res as they are taste treats. Several varieties are available and they make up a good part of the menu. This does include Caldo de Res, and while it is a popular soup on the border, the quality is very good compared to most (the vegetables are not cooked to the point of being mushy as they are in some border style soups). 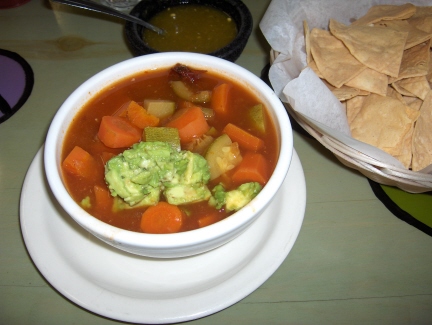 Soups are available in two sizes, with the smaller one meant to be an appetizer while waiting for the meal. I ordered the Caldo Tlalpeño that consisted of chicken, guacamole, vegetables, and a chipotle chile. There were no tortilla strips as in the typical tortilla soup, but otherwise this one was very similar. One of the notable features of it, though, was the vegetables that were fresh and crisp.

This soup comes from the Veracruz area, and because of migration patterns from Mexico usually finds its way to restaurants from Laredo north a lot more frequently than to El Paso and the western part of the United States. I have found chipotle chiles in other El Paso restaurants, but as far as I know Café Mayapán has the only caldo tlalpeño to be found in the area. 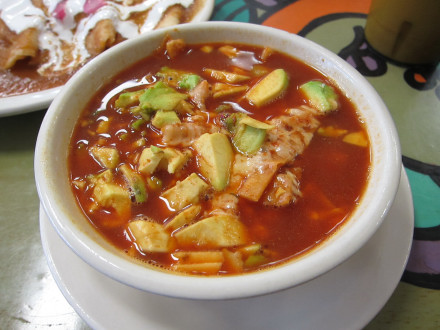 Sopa Azteca is made with tortilla chips and noodles, with the same spices included in the caldo tlalpeño. Missing are the vegetables, but it is good to have two versions of the same basic soup. The chipotle chile is something that I think distinguishes it from tortilla soup. 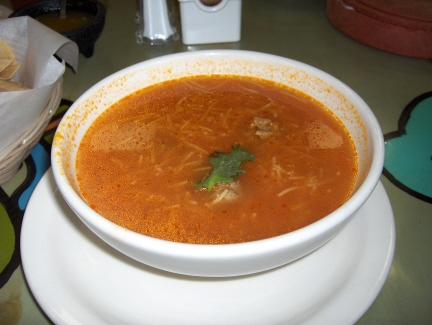 A soup that may be more familiar to borderland residents is Caldo de Fideo made with spaghetti-like noodles and a red colored broth. The one shown in the picture is a large bowl with several albondigas meatballs that have been a traditional border favorite, but are not served at a large number of restaurants because they seem to be hard to prepare correctly. To me it is hard to find any ground beef I really like but this was good. I am not sure if this dish represents cooking from the interior of Mexico or the border, but it shows that Café Mayapán has a little bit of everything. 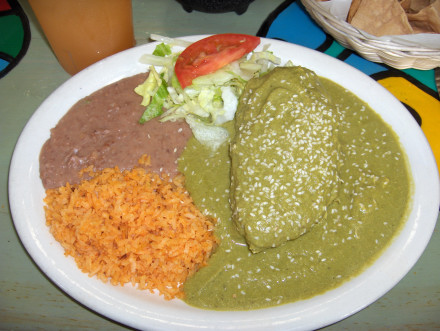 Pechuga de Pollo en Mole Poblano is a chicken breast served with a green mole poblano for one of the restaurant’s “lighter and healthier” dishes (other than the fact it has such a large piece of chicken that it might be too much for lunch). This is the only green mole I have found in El Paso, but I believe Café Mayapán also offers the more familiar brown mole. I think this is a good dish with which to become initiated to Mexican mole. If it turns out the green mole is not your thing, there is enough chicken breast to make a good meal, and the mole can be scraped off. If you find the sauce as satisfying as I do, though, there is enough to cover every bite of chicken. 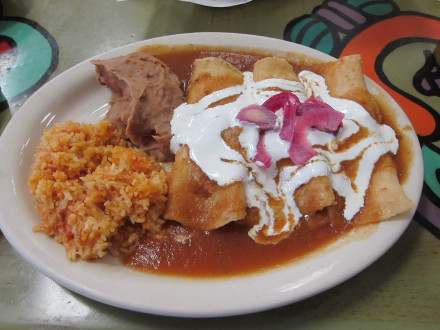 Enchiladas are not as big in the interior of Mexico as they are on the border, and they tend to be less spicy. An example of this is the Enchiladas Suizas which were mild compared to El Paso versions, although they did have red chile. The common feature of all suizas enchiladas is that they have sour cream, and I liked this one because it was the Mexican style crema. Everything about this seemed more interior style to me than border style. 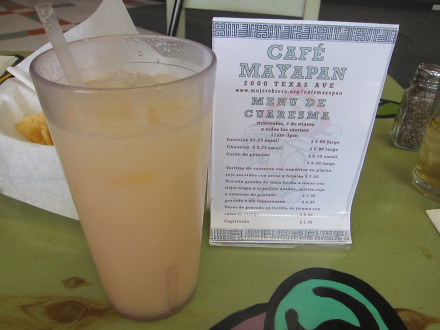 Café Mayapán has a special “Menu de Cuaresma” on Fridays and other Holy Days during Lent with the traditional food served for Lent (fish, seafood, or non-meat items). I found the flavor and quality, though, to be at a higher level than at most restaurants (which is what I would define as being alta cocina). It is a little bit more expensive than most restaurants, but still at a good price. 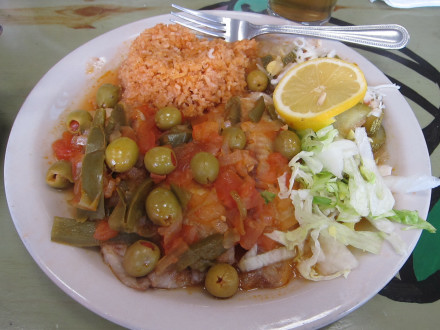 Pescado a la veracruzana is a Lent special

I have tried two of their Lent specials, and I do not know if they are served on occasion during the rest of the year but they do give an indication of the quality of food that is always served. One is the Pescado a la Veracruzana that is usually my first choice for a Lent meal. I think the definition of the veracruzana sauce is that it is not spicy (as opposed to “a la Mexicana” or “diabla” sauces). I usually like it mainly because of the flavorful sauce and vegetables that come on it. Here there is an extra reason to like it, which is the fresh tasting tilapia used for the fillet. I am reluctant to say this is the best in El Paso, but I do not remember any that are better. 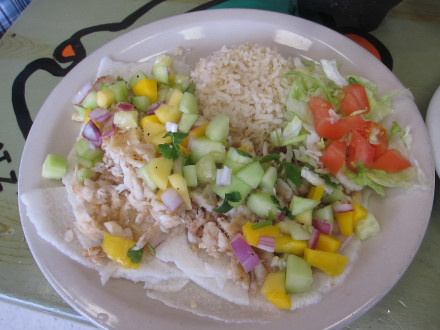 Another good choice is the generic sounding Tacos de Pescado. These go well beyond the generic tacos, though, for a couple of reasons. One is the freshness of the ingredients (a definite pattern at this restaurant). Another is that the tacos are made with jicama instead of tortillas. I think this goes beyond just having food that is elevated, and goes into the realm of it being a very innovative type of Mexican food. This is probably a growing trend in Mexican food, but just not so much along the border. 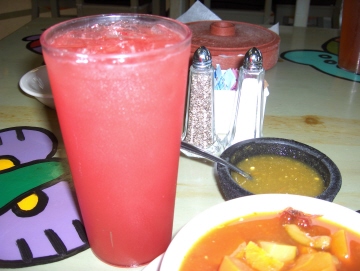 The restaurant serves several flavors of agua fresca drinks including Sandía, a drink made of watermelon juice with no pulp included. After a visit in 2022 I became convinced that these are the besst aguas frescas in El Paso. Even though they have other very good and unusual drinks (such as herbal tea), I think my choice here will probably be the aguas frescas from now on.

Tortillas
The home made Tortillas were one of the best aspects of the meal and provided a flavor that cannot be found in pre-packaged tortillas.

Closing Comments
The real strengths of Café Mayapán are the consistent quality and the menu that offers dishes not normally found in El Paso. The whole experience of having excellent soup, drink, chips, salsa, and tortillas confirmed to me that this is one of the best Mexican restaurants in El Paso. It has gone through a rough time with the Covid epidemic and has taken longer than most restaurants to reopen, but I think the menu and the food are even better than before.

The food at Café Mayapán is not terribly spicy, being more representative of traditional Mexican food from the interior than the spicy chiles more common near the border. I think the spiciest items I have had were the sopa azteca and the caldo tlalpeño. In the past they have had special menus that focused on certain regions or states in Mexico. I am not sure how they do it now, but I believe there are always items that come from somewhere in Mexico other than the border region.

I understand that many of the dishes come from recipes the women bring with them from Mexico, and I give kudos to the management for not thinking they have to serve the same thing as every other restaurant in the city. The restaurant is owned by a non-profit organization and many of the clientele are working people. They keep the prices down as much as possible, but the word is also getting out that this is one of the city’s better restaurants.