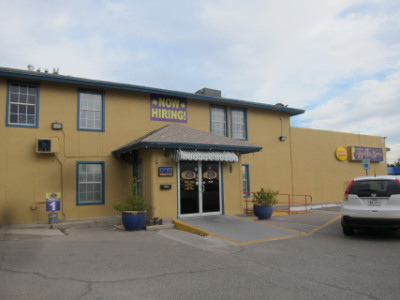 The original Trattoria Bella Sera opened its doors in 2007, occupying the space of the former Savino’s Restaurant at 9449 Montana Avenue. Its subsequent move to Yarbrough Drive, though, provided a more spacious and upscale dining room, with the customer response seeming to validate the need for the greater number of tables now available.

The restaurants’ web site explains that the owner, Giuliana Leardini came from Verona, Italy and opened the restaurant to serve recipes that have been passed down from generation to generation. I understand that before opening the restaurant she had quite a bit of experience preparing food, so that this new venture was the culmination of not only the best recipes but years of practice preparing them. 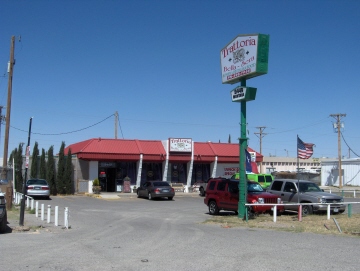 The old location of Trattoria Bella Sera on Montana Avenue

“Trattoria” means home made, and I think the food at the restaurant reflects the name. I thought it tasted about as close to home made Italian cooking as one could ever expect in the United States. Unlike my experience with Mexican food, I have not been to the home country where Italian food is produced, so I have to go by what tastes good and fresh as opposed to what is “authentic.” If others informed me that Trattoria Bella Sera was authentic, though, I would certainly believe it.

Soup and Salad
The entrees from both the lunch and dinner menu include a complimentary soup or salad. The fresh green Salad I ordered was quite good and was definitely a step above the ones made at some other restaurants that are primarily iceberg lettuce. Bella Sera also has more expensive salads that can be purchased, but I found nothing wrong with the complimentary one. 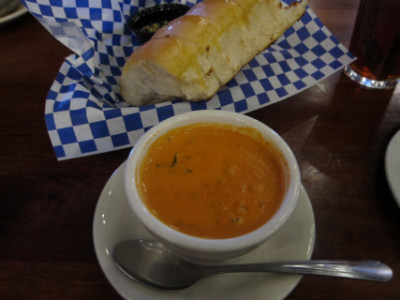 The Crema di Pomodoro soup, on the other hand, was something that I found to be outstanding and noticeably better than soups that are served in many other restaurants. This soup is “cream of tomato with a touch of garlic and basil.” I think there must be much more than this that goes into the recipe, and it is definitely not the standard tomato soup that I usually encounter.

Dinners come with the cup size of soup, but they are also available in a bowl. I would judge that the bowl would make a good meal if you are eating light, but for a “normal” meal you would want something else to go with it (although there is really nothing else on the menu to order with it that would beat the price of ordering one of the regular lunches or dinners).

Food from the Old Restaurant
The food from both the old and new Bella Sera restaurants has remained the same, but I am putting my comments about the original restaurant in a separate section just for purposes of documentation. Since the restaurant’s inception it has included a salad or a cup of soup with each lunch or dinner entree, and you get complementary bread. I have come to the conclusion that it is usually worth ordering the soup because the soup here is not like you will find in most other restaurants. 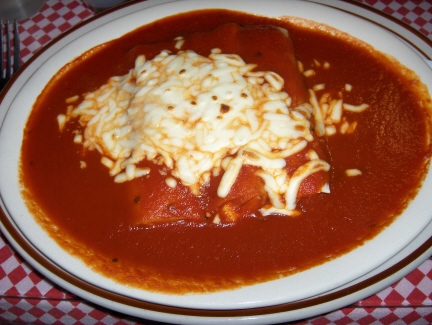 Italian restaurants are one of the best places to find really good meatless meals, and Bela Sera is near the top of the list for this. One example is the Manicotti that came with three pasta tubes filled with ricotta cheese and topped with mozzarella and red sauce (I hope I described it correctly since this came directly from the menu). What the menu did not describe was that this was a totally fresh ricotta cheese that certainly tasted home made, and made this one of the best manicotti dishes I have eaten. The red sauce was even more impressive, having a flavor I had previously experienced only on the east and west coast (although a couple of restaurants in Oklahoma came close). The chef’s background from Italy was certainly evident here. If you think “red sauce” Italian restaurants have gotten somewhat of a bad name in the United States, Trattoria Bella Sera will go a long way to change that image.

Of course, this dish as well as many other meatless ones are made with cheese, so are not vegetarian as defined by some. I do not know if Bella Sera has any truly vegetarian dishes other than some of the salads, but the chef does some pretty good things with cheese at a level that I think few other Italian restaurants match. I would definitely suggest giving it a try. 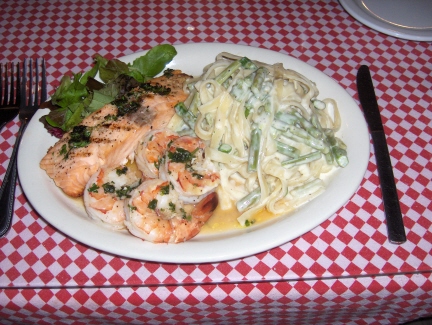 Salmon and shrimp dinner was a special from the old restaurant

One special I ordered was a Salmon and Shrimp plate that served a quantity of food that would feed two people really well (although it only came with one soup or salad). I judged the seafood on this plate to be not particularly impressive, but both the salmon and shrimp were about as fresh as can be found in the desert Southwest.

To me the best part of the plate was the Fettuccine Primavera made with Alfredo sauce and fresh asparagus (the fettuccine on the menu had different vegetables than the one served as a side dish on the special). As good as the vegetables were, I thought the sauce was the main factor that made the pasta stand out from others I have tried. Alfredo sauce is usually my biggest disappointment at Italian restaurants, but I would not hesitate to order it as a dinner at Trattoria Bella Sera. 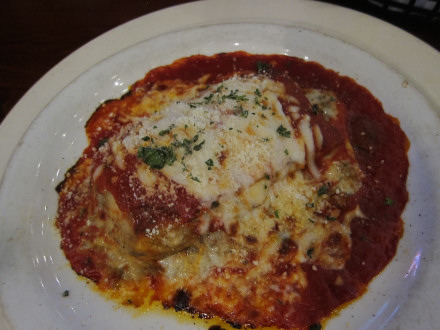 Lasagna served on the lunch menu

The lunch menu includes an abbreviated list of dinner items served in a smaller portion at a good price. I took advantage of the opportunity to order Lasagna–something that would probably not normally be my choice. Lasagna used to be my favorite Italian food but the past few years I have been disappointed with many of versions I have tried. The one here, though, gave the full flavor I was expecting with the sauce, cheese, and seasonings. Over the years I have found other meats that I prefer to the ground beef normally served in lasagna, but the one here had a flavor that I think made it “Italian” and not just hamburger meat. Overall this was probably the best lasagna I have had in a number of years (at least it is the best one I can remember). For the lunch menu where there are more limited choices, I think this is an excellent choice. It would really not be a bad choice on the dinner menu either. 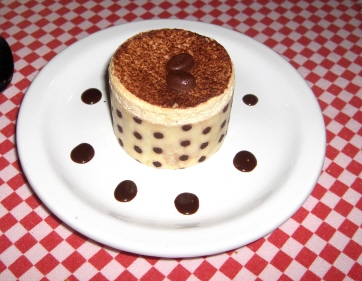 Quite a few desserts are offered, and I suspect they are all good. The restaurant has an espresso machine and offers Italian soda as well as other drinks.

Other Comments
One of my readers said Trattoria Bella Sera is “Italian food the whole family can enjoy and afford.” I have to agree completely with this statement. The restaurant is casual enough to take the family and it will not break the bank.

Before some high end restaurants opened such as Mi Piaci, I considered Bella Sera to be the unquestionable choice for best Italian food in El Paso. I still think people are going to find Bella Sera to be the best in the city for many items. I would go further than this and say that it compares favorably with many of the best restaurants in Oklahoma City, where I have the most experience with really good quality Italian food.