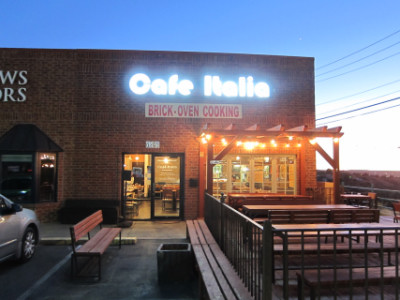 Café Italia opened in 2007 in a small space on North Mesa that had previously been a frozen custard franchise. I hated to see the custard place go, since I thought it was better than some of the alternatives including the frozen yogurt shops. However, in many ways Café Italia offered a unique opportunity to enjoy traditional Italian cooking that was on the level that could be found in larger cities.

Café Italia’s brick oven was built to prepare wood fired pizza and other specialties at the restaurant. Actually the menu is quite small with seven pizza choices, a small selection of pasta dishes, salads, and desserts. At first the menu changed periodically and offered special items such as seasonal vegetables and prosciutto but now there are two antipasti dishes on the menu–wood roasted vegetables and prosciutto with with goat cheese, salami, pear, and roasted walnuts. They now have two choices of calzone as well–margherita or meatball.

Based mostly on my early visits I found that pizza is really the thing to order here. Part of it, though, is that the pizza is so good it is usually the reason I come to the restaurant in the first place.

They have now opened a second restaurant at Resler and Paseo del Norte. Despite having another option the original restaurant has still been very crowded when I have gone. They have opened an outdoor patio but at least in winter it does not get much use because of the fact that the restaurant does not open until 5:00 p.m.

Pizza
I have found the pizzas here to be exceptionally good, with some of the chief factors being that the mozzarella is made in-house daily and the dough is “properly fermented” (according to the restaurant’s web site). They have a wood fired brick oven, and as of 2021 these are really the best pizzas I have found anywhere (as yet I have not visited any restaurants certified by the Associazione Vera Pizza Napoletana but I believe the pizzas here are very close to this standard).

In most restaurants I evaluate whether the best factor is the crust, cheese, sauce, or toppings, but here it is all of them. In addition, though, the wood fired cooking method is not one that is used in most pizza restaurants. 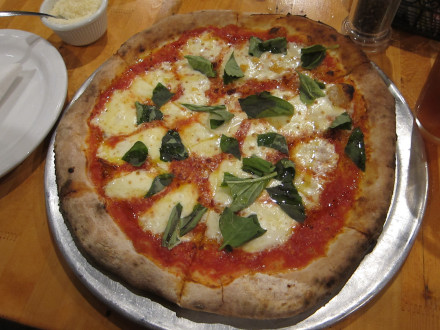 The Margherita Pizza is my favorite item here, and in fact I think it is the best margherita I have had anywhere. This is the pizza where I have found the toppings to be equal to the other ingredients (crust, cheese, and sauce), with the basil being extremely fresh and flavorful (as if they grow it in their own garden). Some pizzas at other restaurants have had fresh tomato that is probably more satisfying than the large amount of sauce used here to substitute for tomatos, so I am not saying this is the best margherita pizza anywhere. I am saying, though, that I think it is my favorite (and the basil is a big factor in this). 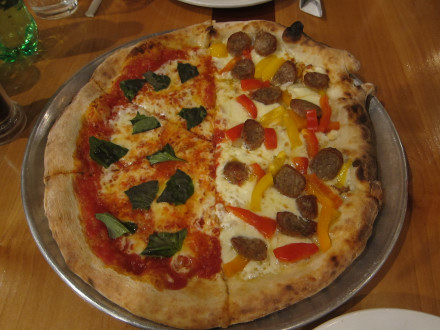 Half and half pizza with margherita and smoked

I was also extremely happy with a Margherita and Smoked Half and Half Pizza they prepared. The smoked side has bell pepper and sausage, which I think is more like the ordinary pizzas I get at other restaurants. The smoked mozzarella, though, was quite a taste experience (being both house made and smoked).

I was able to trade a slice of one of my “good” pizzas with friends for a slice of the Pepperoni Pizza, which turned out to be very good as well. The only difference, though, is that the pepperoni flavor tends to drown out some of the others (sauce, mozzarella, etc.). There is certainly nothing wrong with this, but It was not the one I liked best.

Other Items
There seem to be good possibilities for other menu items, with many of them cooked over wood in the brick oven. I just doubt, though, that I would be craving something other than the pizza when I come here. 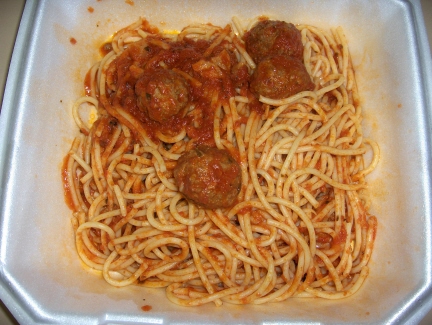 One item I tried on a takeout order, though, was the Spaghetti & Meatballs from the pasta menu. I thought this was high quality and had a flavorful sauce, but perhaps one factor that made it less attractive to me was a relatively sparse amount of sauce to go with the large portion of pasta.

I asked about the calzones and they only have two kinds–margherita and meatball. The margherita version does not have basil but does have the same sauce and mozzarella that is on the pizza.

Additional Comments
With the pizza I believe the quality of the cheese, crust, and sauce really make a difference here. To me some of the toppings are comparable to other restaurants, and when they have a strong flavor such as the pepperoni I am not sure it is worth paying the higher prices here compared to other restaurants that also have very good pepperoni.

I think the margherita pizza is an excellent choice because of the basil and the large amount of mozzarella that is included. Cheese is rarely the factor that puts me over the top in liking certain pizzas, but this one is really among the best I have tried, and it is not overwhelmed by the flavor of the toppings.

My rating for the restaurant is mainly for the pizza–it is their specialty and I think the main reason to come here. I am less sure about a rating for the other items simply because I have not tried many of them.

I would say this is really a $$$ restaurant instead of $$, but by ordering a pizza with no salad, antipasta, or paying a bottle fee to bring your own wine, the price has been well within acceptable limits and I was still able to have an exceptional meal.