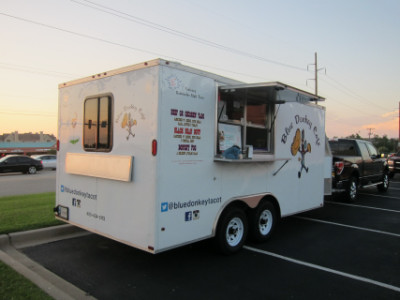 I am somewhat new to the food truck craze, mainly because I do not often make snap decisions to have a meal as I pass by something that looks interesting, but rather I am already going to a predetermined location.

Food trucks in Oklahoma City seem to travel quite a bit, although the ones I think are luckiest find a home location and only occasionally have to travel to other spots. In examining Blue Donkey’s Facebook page it lists a number of locations where the truck will be located at certain times. Its home base is the Arts District in downtown Oklahoma City (near the Oklahoma City Museum of Art). There is quite a bit of downtown traffic at lunch on weekdays, but the down times at evening and weekends afford Blue Donkey ample opportunities to travel elsewhere in the Metro where likely customers can be found.

One of these excursions was at N.W. 122nd Street and Rockwell, where the Blue Donkey truck showed up several weeks in a row, establishing enough of a pattern that I could predict when and where I could find it. This afforded me the opportunity to try all three of its menu items (tacos and two side dishes), and also gave me the desire to go back and try it again (which I did until I no longer found the truck at that location). 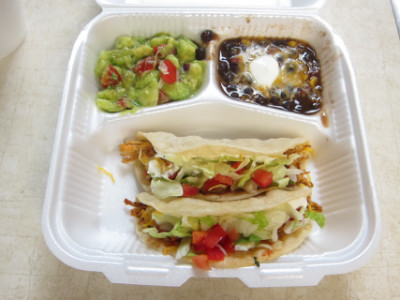 Information on the truck indicated that this is Guatemalan food. I have been to Guatemala and did not really recognize the food they were serving as being from that country, especially considering the very high spice levels of the food that somewhat approached those of Hatch, New Mexico, the “chile capital” of the United States.

There are two types of Tacos, chicken and beef (I only ordered the chicken ones). These were quite good and whether they are actually Guatemalan or Mexican does not matter very much because I enjoyed the end result.

One of the side dishes is called “Donkey Poo” and consists of guacamole and cucumbers. Also in abundance is a very spicy chile that I was not expecting in a Guatemalan food truck, but it was good.

I thought the Black Beans were more flavorful than the guacamole, and would be my preference except for the fact that they were even more spicy. The problem with this is that it is in a food truck setting where the selection of drinks is limited, and I cannot get my usual iced tea to quench my mouth with this type of spicy food (as I recall Blue Donkey did not have iced tea, much less the refills that I would have required). I was able to take the food home and provide my own drinks, but absent this I am not sure Blue Donkey would have been an enjoyable experience. 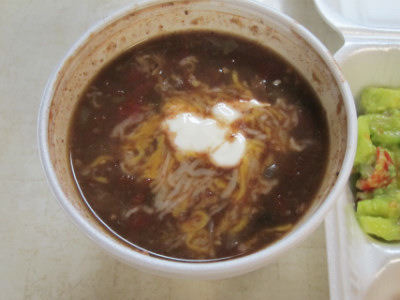 The Black Beans also come as a large side order that is in the form of a soup (but these are the same beans served as a side dish on taco orders).

Additional Comments
I am still at somewhat of a preliminary stage in evaluating the food because there were a lot of factors that entered into my experience, the main one being that this is not a regular restaurant where they could serve the drinks I would want to have with spicy food.

The tacos were certainly good, and probably better than at Big Truck Tacos (another food truck which was formerly located at this intersection). Big Truck had a much larger selection of tacos, though, so I am not sure how the two trucks really compare to each other.