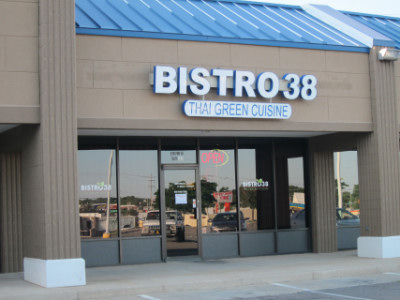 Update Sep. 2020: They currently have only two tables for dine-in customers, and most of their business is takeout. My latest order (which was takeout) came in containers that kept the food warm and fresh, and it was as good at home as it is in the restaurant.

Bistro 38 Thai Green Cuisine is not the first Thai restaurant to operate in this location, and I believe the change occurred in 2014. The previous restaurant was owned by Sala Thai, although it was apparently operated independently. Bistro 38 is still the same kind of small family run restaurant that I believe was here before, and I think this is a big reason for the positive reviews I have read for both restaurants.

Most of the dine-in customers seem to come at lunch, and otherwise it relies largely on take-out orders. I experienced a comfortable dining room, the music was enjoyable, and the service was good. The menu was not huge but it looked as if it had several good choices. Outwardly it was very much like the typical strip mall Thai restaurants I find around the city. 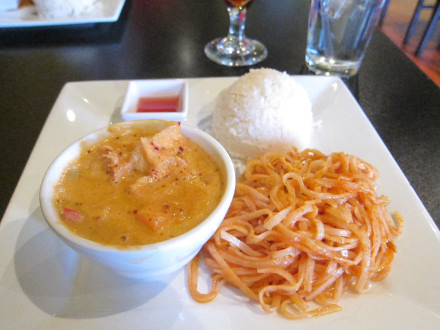 Although the dinner menu is priced well compared to other Thai restaurants, lunch is even more of a bargain. Lunch Specials give you one item (noodles or fried rice) while the Lunch Combo gives you four (the main item which is either curry or pad basil, veggie pad thai, steamed rice, and a veggie spring roll). The menu says no substitutions are allowed, but they did let me get a double portion of the pad thai and delete the spring roll (I am mentioning this mainly to explain why the photo above includes an extra large serving of pad thai).

The choices on the Lunch Combo are good: the Panang Curry is one that I liked and my waitress said was one of the best choices. I definitely had a “happy meal” with this selection (to borrow a phrase I frequently see at Japanese restaurants). 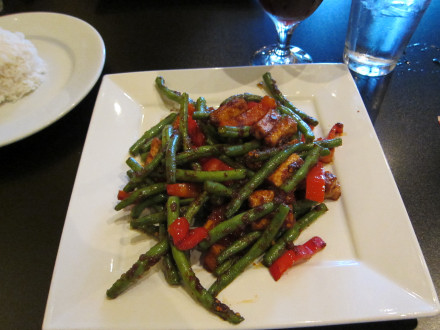 The Pad Prik King had a good sauce (curry without the coconut milk), crispy green beans, and tofu with a good texture (I ordered the vegetarian version). I found this version to be similar to the ones at several other restaurants (and this is a good thing). The dish was made the right way, and I did not have any complaints.

I did learn, though, not to be timid about the spice scale here (they have a one to four “level of spiciness” and I think about two and a half is the minimum I want to order on this type of dish–this would be equivalent to about two at most other restaurants). 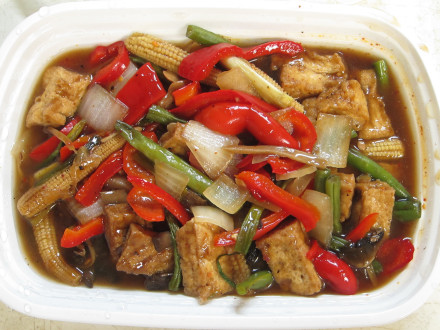 Ginger Tofu is one of my favorite Thai dishes, and one of my yardsticks by which I measure a restaurant. This one was very fresh and had high quality ingredients. One surprising feature (compared to many other restaurants) is that the vegetables were enjoyable in themselves. Most ginger tofu dishes have a substantial amount of onions with a small amount of other vegetables, but with this one was full of red peppers, green vegetables, baby corn, etc.

The thing that detracted from the ginger stir-fry, though, was the sauce. I thought it was too sweet, unlike the pad prik king and the curry I have tried. The dish was good in spite of this because of the tofu and the vegetables which were really very impressive (and of course the ginger).

Pad See Ew
I had a sample of the Pad See Ew, a noodle dish with chicken and broccoli. I thought the chicken was very good, the broccoli was crispy (not quite as good a thing to me as the green beans being prepared this way), and the noodles were good. Overall the dish did not seem to have much flavor, though. This was much the same as I have found at most Thai restaurants, but I keep looking for the few who can make noodle dishes more flavorful. They will give you fish sauce for additional flavor, and this certainly helps. Still, although it was good, this was not a five-star dish for me. 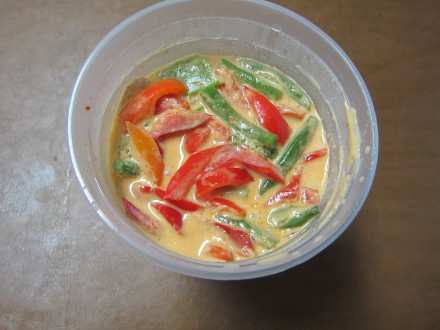 I mentioned the Panang curry I had on the lunch special, but another choice from the main menu is the Jungle Curry, consisting of mixed vegetables in red curry. I did not care for the flavor quite as much as the Panang curry, but it was still very good (especially with the vegetables). 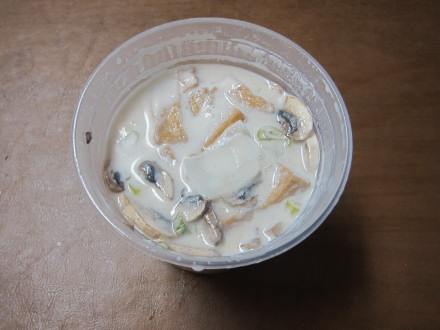 I wanted to try the Tom Kha, a coconut soup with mushrooms, onion, and lime juice (with your choice of meats or tofu). I thought it was a little lacking in flavor compared to others I have had, so I rated it as four stars. However, it comes in a large bowl and is substantial enough to have it for a dinner (as I did). When served family style with other items, though, I believe this is when it could best be appreciated in the contrast between the coconut and the flavors of the other dishes. 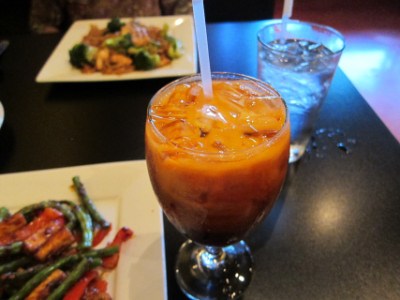 The Thai Tea was very good. The fact that it was milky on top and dark at the bottom was also a good sign that this drink is legit. 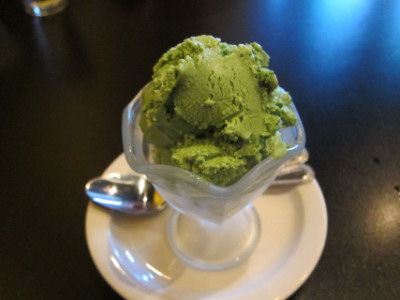 Bistro 38 has a good Green Tea Ice Cream for dessert (and I enjoyed it more because the food itself was not too sweet). Also this is one of the restaurants where I do not spend all my money on a meal (I can say, though, that the meals are pretty filling).

Recommendations
The restaurant’s web site says that it is “modern Thai,” and I think this is why I find some dishes to be very impressive while others seem to be less flavorful than at other restaurants.

One dish that comes immediately to mind that I would recommend is the pad prik king. This dish is usually a “yardstick” dish for me, and I thought it was done the right way. The Panang curry was equally impressive in the way they prepared it.

The lunch combos are really a good way to go because just about every flavor here seems to go better when you can combine it with other contrasting flavors. The combo gives you curry or a stir-fried dish along with steamed rice, pad thai, and a spring roll.

One time I asked the waitresses which were the best dishes, and I thought she gave a very honest and accurate answer (although I failed to write it down and I do not remember what she said). At this restaurant, though, I think this would be a very good resource if you are wondering what to order. 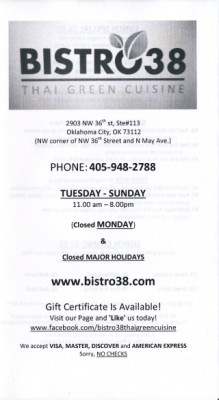 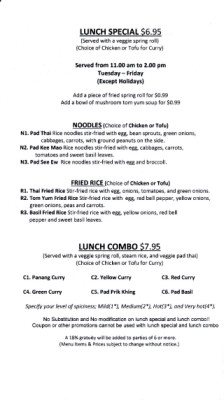 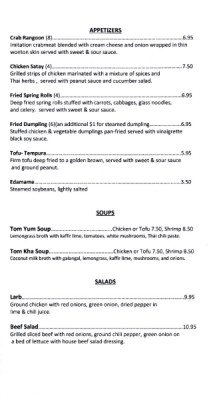 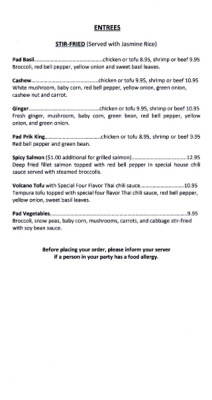 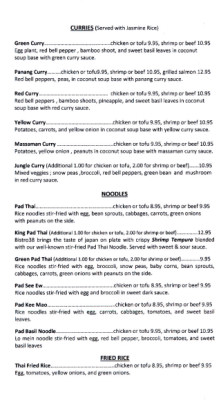 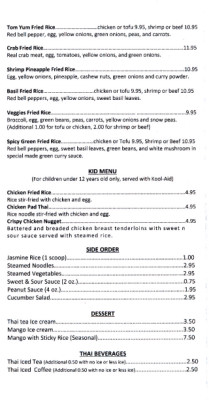