Saveur Magazine, in “The Texas Issue” of July 2009 recognizes two facts that I use as assumptions on this web site: that El Paso has its own regional style of Mexican food and that enchiladas are one of the distinguishing features of this cuisine. On page 47 of the issue Beth Kracklauer relates the story of visiting the Gonzalez family of Las Cruces (who are friends of the Jurado family, long time operators of Casa Jurado in El Paso).

The family demonstrates how to cook enchiladas three styles (New Mexican, El Paso style, and Mexican) starting with a common pan of chile colorado sauce warming on the stove. The sauce “consists of nothing more than dried chiles, olive oil, garlic, and sea salt, and it’s going into all three kinds of enchilada.” 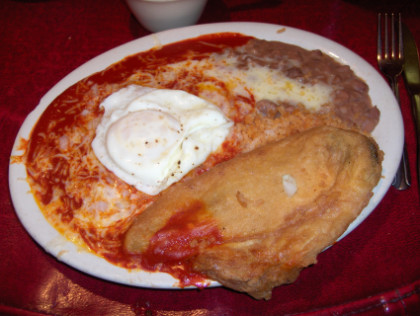 To make New Mexico style enchiladas the cook lays the tortillas flat, each tortilla dipped in chile colorado and topped with a sparse scattering of cheddar cheese, and on top of each stack of tortillas goes a fried egg. 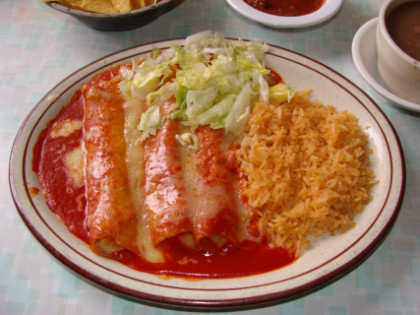 The El Paso style enchiladas are rolled and set side by side in a baking dish, coming from the oven with shredded white and yellow cheddar on top. It was explained that “You’d never get this in Mexico. There, cheese is just a garnish, used very sparingly.” 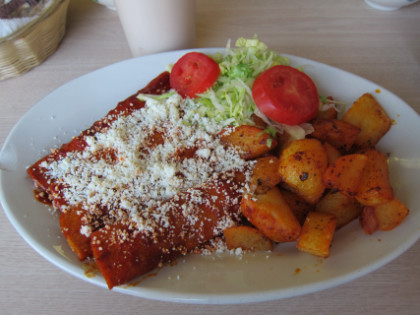 The northern Mexico style enchiladas are rolled, but only lightly dusted with crumbly cotija cheese and accompanied by fried diced potatoes and a tangy cabbage and radish slaw.

The author concludes that though the basic ingredients are the same, the three versions are decidedly not. “The differences between them come down to subtleties of technique–an extra dip of a tortilla in hot oil, another ten minutes on the stove to reduce the sauce, a pinch of cumin tossed in at the end–the kind handed down intuitively, from mother to daughter to grandson.”

I would add my own comments to this article by saying that I think cooks trained in different traditions of Mexican cooking sometimes make other changes as well, such as the chile used (especially for New Mexico cooking), the oil used (vegetable versus lard), other ingredients added to the sauce (cumin, etc.), and other factors.  Moreover, green chile is probably more popular in Mexico and New Mexico, while red chile seems to be the norm in El Paso.  The story in Saveur Magazine, though, gives a very good description of the differences in the three styles of enchiladas served in the El Paso area–El Paso, New Mexico, and Mexico.