On the subject of enchiladas, I think the biggest news for Oklahoma City is how much they have improved over the past 20, 10 or even 5 years.  I know that some of the best enchiladas (and Mexican food in general) is found south of Interstate 40.  This article, though, is not about the best enchiladas in the Metro, but rather about some interesting ones I have found in the north part of town (and which I think compare favorably to other cities).

Several of the enchiladas mentioned are from restaurants that are known primarily for their American style Tex-Mex food (not in these words, of course, but this is how I think of them).  Even in some of these restaurants, though, I have found some gems which I thought should be shared.

The following list is not ranked in any order, but it goes roughly from west to east:

In some ways I thought their presentation of New Mexican cuisine fell a little flat, but the green chile was excellent, and one of the best ways to get this is in the green enchiladas. 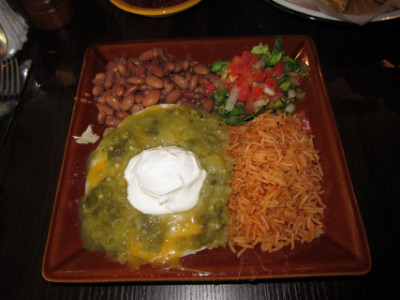 Green enchiladas are served just about everywhere in New Mexico, and now they are available at Green Chile Kitchen in Yukon.  I thought these enchiladas were special because of the green chile, which has a more pure chile taste than many of the others in the Oklahoma City area.  It is not over-the-top spicy, just a flavorful chile with a little bit of kick.

San Marcos has four restaurants in the Oklahoma City Metro (including one south of Interstate 40), but this location is the one at which I have personal experience.  I think the menu is the same at all of the restaurants, but the “authentic” dishes seem to be seldom ordered at the Rockwell location (and I would guess, based on the demographics of the other neighborhoods, that they would be more popular at these restaurants). 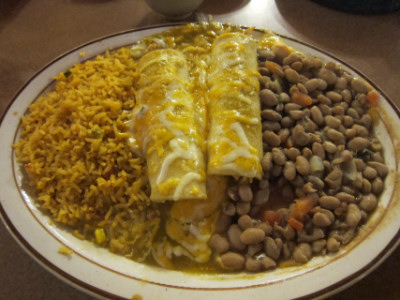 I have to give the disclaimer that the most authentic enchiladas are not necessarily the best ones, but in this case I think it is worth giving the green enchiladas at San Marcos a try.  Like the previous restaurant mentioned in Yukon, you will not get a dish here which is super spicy (but yes, it is a little bit spicy).  This is a green tomatillo sauce which I think is popular in central and southern Mexico.  For this particular sauce I like to get chicken enchiladas and some sour cream on the side (these are listed simply as “Green Enchiladas” on the menu).

Still on the far west side of Oklahoma City is a small restaurant serving authentic Mexican food that has made converts of many locals who formerly had Tex-Mex as the predominant choice.  Like most authentic Mexican restaurants, enchiladas are not a big part of the menu.  Also like most restaurants I have experienced in Mexico, the enchiladas here do not major on the cheese.  The root for the word “enchilada” is “chile,” and the dominant flavor of the enchiladas at Birrieria Diaz is the chile (either red or green). 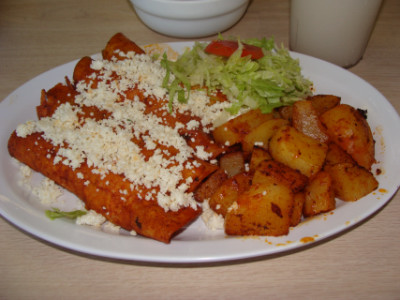 The red and green enchiladas are both good, but I like the green slightly better.  The photo shows a full order of the red enchiladas (and both types of enchiladas are available in a half order).

Abel’s serves Tex-Mex style enchiladas, but the “Mexican” styled red and green enchiladas are the ones I think are special.  The green enchiladas at Abel’s have a sauce similar to the tomatillo sauce found at some other restaurants, but I particularly liked the flavor here (as well as the rice and beans, salsa, drinks, and the entire meal as a whole). 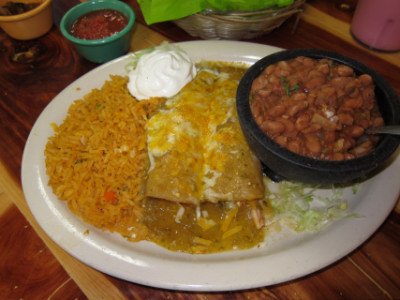 Abel’s red enchiladas also make a good meal, and should be added to the list of “enchiladas worth seeking out.”

I will have to say that I was somewhat surprised to find the next entry to this list at a restaurant that generally does not impress me very much, but I think the rajas enchiladas here are among the best enchiladas in the city.  Some rajas dishes seem to have a very odd flavor, but Casa Perico does it the right way (in my opinion, of course). 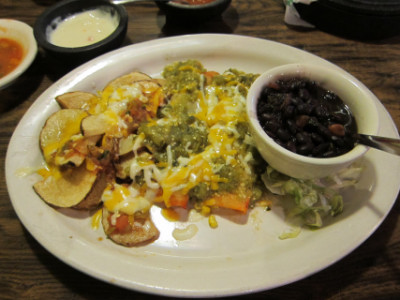 These have a very robust chile flavor without being overly spicy, and the cheese provides a good balance to it.  Some even better news is that there is another Casa Perico at N.W. 122nd St. and Pennsylvania.

Poblano Grill has a green tomatillo enchilada similar in quality to Abel’s (and others), but it is not on the menu.  It so happened that I asked the waiter if they could make a tomatillo enchilada, and I was rather surprised that they could!  It was even more of a surprise that it was one of the best green enchiladas I have had in OKC. 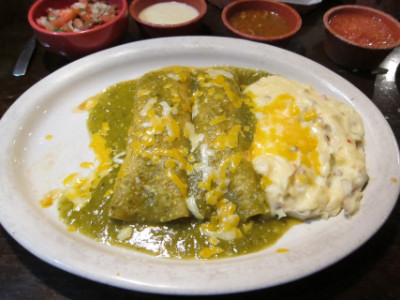 Poblano Grill is now on my short list of places I want to try again because of being able to make special orders, and because what I had was very satisfying.  When I said the Mexican restaurants have come a long way in the last few years, Poblano Grill is a prime example of this (most of the menu continues to be Tex-Mex, but it is a very good sign that they now have other items).

Poblano Grill also has a location in Midwest City.

I have not been to Mamsita’s for a while, and I do not know if they have changed the menu, but what I really liked was the fact that they served enchiladas with blue corn tortillas.  I think Green Chile Kitchen in Yukon was thinking about doing this, but of course it is better if you can actually get it this way when you go. 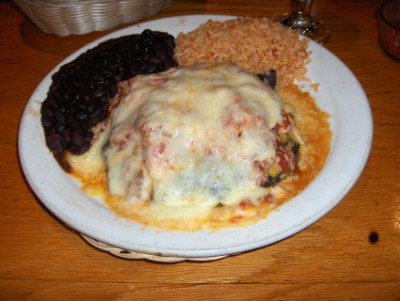 Overall I did not think this was actually one of the best enchiladas in Oklahoma City, but just the fact that it had blue corn tortillas made it a treat for me.