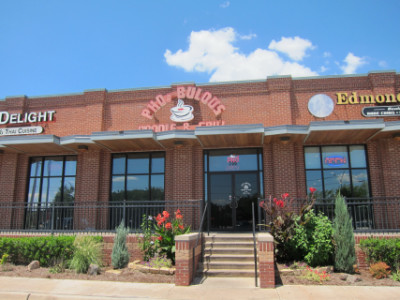 Pho Bulous does not have what I would call an extensive menu, but it has enough that there are good choices other than its signature dish, the pho. This is a suburban restaurant in a strip shopping center, but there are so many competing Vietnamese restaurants in north Oklahoma City I believe that many of them are stepping up their game, and give customers more than they may expect to find in similar restaurants located in other cities.

In the case of Pho Bulous I believe the main attraction is the pho. I found it to be one of the best in the Oklahoma City Metro, and they have several varieties of the soup including vegetarian soup that is only available at lunch (but this is one of the few restaurants that offers it). Note: as of 2020 the menu says “vegetable broth available upon request.” 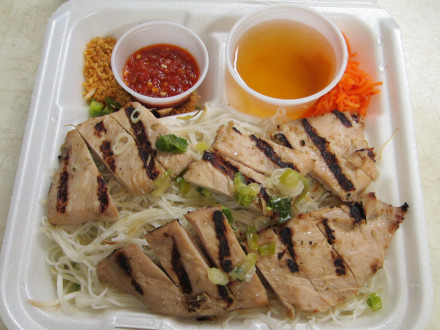 The Grilled Chicken Vermicelli Platter was better than I expected in many ways, based on a comparison with other restaurants. The chicken was very good, especially in the quantity of meat that they give, and had just the right amount of char. I liked the fact that there was a generous portion of nuts, and the other vegetables were good. It had a very good chile sauce (a must for me), and overall this was a good meal. The only drawback was that I did not taste any mint, even though the menu said that it was included. I gave the dish five stars because it was that good, but this kind of inaccurate menu description does not sit well with me. In being objective, though, I can say that in spite of this it was a very good dish. 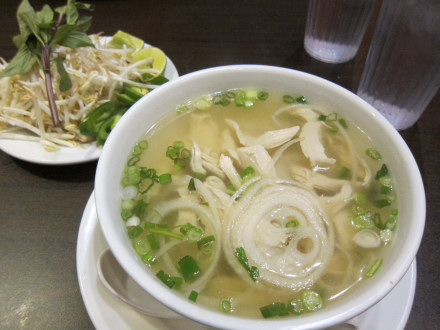 The Noodle Soup with Chicken (chicken pho) seemed to be made with the same care that most restaurants use for their beef soup, and I thought it was quite good. In fact, compared to other chicken soups this may be the best one I have had at a Vietnamese restaurant. Other restaurants (Pho Hieu in Yukon for example) add other ingredients that make them better in some ways, but the one here was pure chicken meat with chicken broth, and I was quite impressed with the flavor that it had.

The pho here has MSG, but apparently not very much because I did not have a reaction to it. Because of the soup’s flavor and the fact that it was for practical purposes MSG-free, this restaurant is definitely near the top of my list for the noodle soup.

Other Dishes
My dining companion had a Lettuce Wrap which was described as “passable.” Obviously they are trying to appeal to more people by having other items on the menu, but the Vietnamese food is what I would consider their specialty.

Drinks
In addition to the standard drinks, they have boba drinks (tea and coffee). I think the hot jasmine tea is one the expensive side, and I do not order it.

Recommendations
Pho Bulous offers some of the best bang for the buck I have found in Edmond (provided I skip the hot tea). The pho is some of the best I have tasted, and the vermicelli platter is good quality as well.

Cuisine: Vietnamese
Cost: $$
Hours: Closed Tue.
Accessible: Yes (ramp is on the north side of the shopping center next to Charleston’s)
Smoking: No smoking
Alcohol: Beer 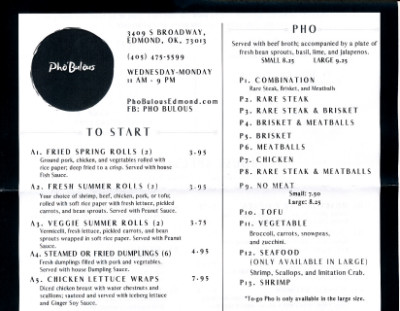 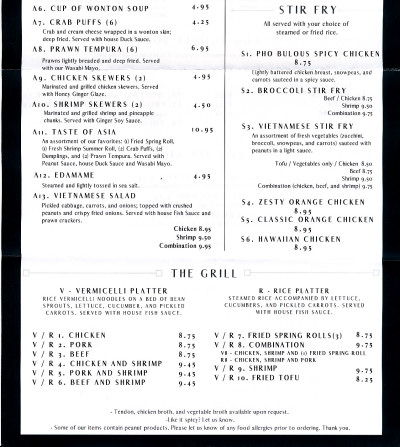 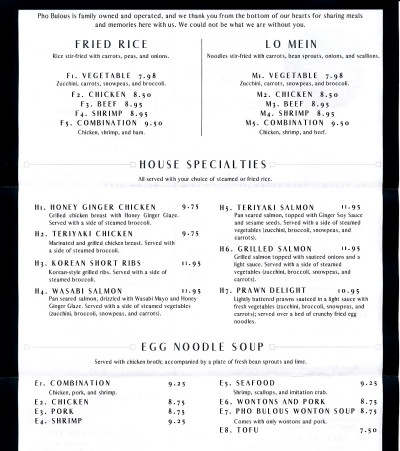 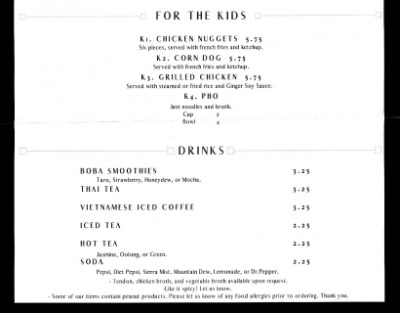