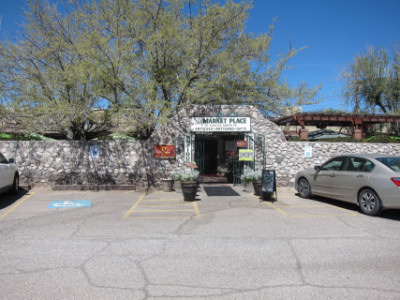 Magic Bistro in the Marketplace at Placita Santa Fe

Magic Bistro is a prominent part of El Paso’s upscale food scene, a trend that seems to have exploded in recent years. Its predecessor, The Magic Pan, operated at this location for a number of years and was one of the pioneers of the city’s upscale eateries that were at the same time casual and not in a country club or private club setting.

Its location in the Marketplace at Placita Santa Fe has historically been a place to find arts and antiques, and as long as I can remember has been anchored by restaurants with the word “Magic” in them. The Placita seems to me very much like a calm respite from the surrounding urban life, and is one of the benefits of coming here. 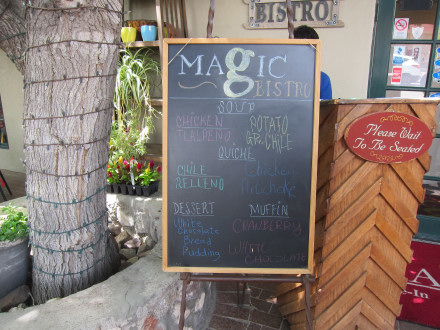 The setup of the restaurant is a little unusual, but it reflects the quirkiness of the Placita. The photo at the top of this page shows the entrance to the Marketplace, inside of which are the restaurant and several shops. The restaurant is directly behind the main entrance, but before you enter the building there is a reception desk on the patio with the daily specials written on a blackboard. There are times when the restaurant is busy enough that you would need to get on the waiting list for a table, but normally you either sit on the patio or go inside to the second reception area. Most people seem to prefer the indoor area, and there has been adequate space the times I have gone. 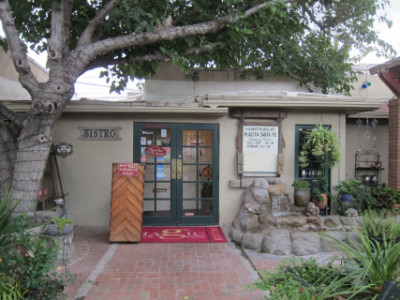 Restaurant’s entrance next to the patio area

When I refer to Magic Bistro as upscale it means the food. Dress can be very casual if you wish, and historically when I have gone here or to the Magic Pan it has been in combination with a shopping trip within the Placita or at nearby stores (and many times to the nursery on Lindbergh Avenue).

Magic Bistro is now strictly a lunch restaurant (it opens at 11 a.m. Tuesday through Sunday). Before the pandemic it was open for dinner Friday and Saturday, for which there was a separate menu. For both lunch and dinner the restaurant has traditionally let two people split any plate and get an extra order of side items for a nominal price. 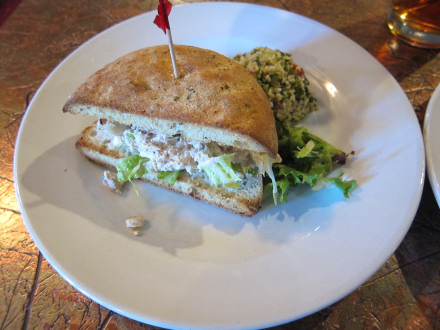 Half tuna salad sandwich with tabouli

Sandwiches are Magic Bistro’s “bread and butter” (so to speak), and are the largest part of the lunch menu. Normally I am not much of a sandwich person, but the sandwiches here are very good, and there is a wide choice of items to go with it.

This was a Tuna Salad Sandwich on a half-soup, half-sandwich plate, with tabouli as a side item. I thought the price was good, and it met my criteria for being an excellent tuna salad sandwich (I do not know what was in it, only that the flavor was very good). 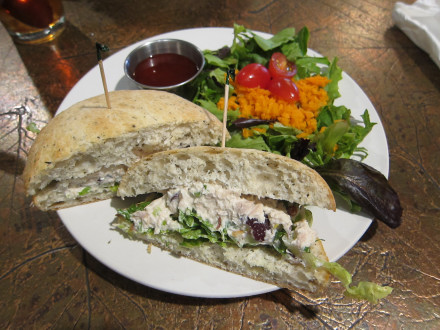 The full tuna salad sandwich also comes with a side, but in this case they substituted a salad with pomegranate dressing for a side. 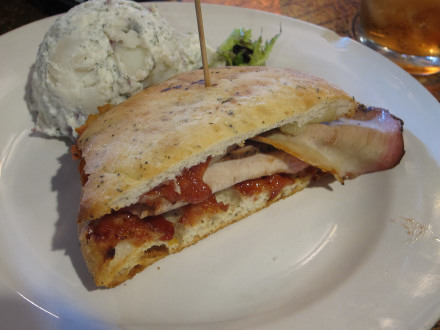 The Pork Tenderloin Sandwich is another popular choice because of the fact that the restaurant smokes its own meats. It also shows the restaurant’s propensity for spicy food due to its chipotle raspberry sauce. This did not quite have the spiciness of New Mexico chile, but it was well above the spice level I have found at most barbecue restaurants (however this was more of a barbecue fusion dish because of the sauce).

I found the flavor of the sauce a little disappointing and gave it a lower rating than the tuna salad sandwich because of this, but the quality was good. The rating is based solely on my personal taste. 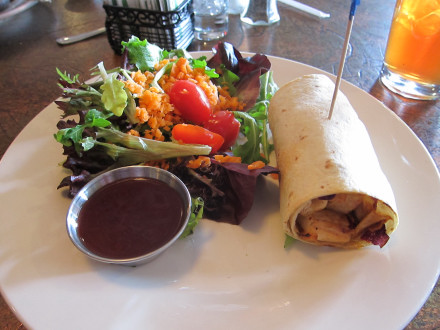 I have not been much into wraps, and the Asian Chicken Wrap did little to convince me otherwise. Part of the reason was the wrap, which tasted much like a flour tortilla except that it was a little crispy. The rest of it did not taste very Asian, and I do not know on what basis they call it :Asian.” 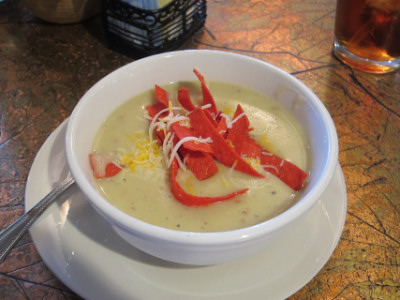 Many of the soups are spicy as well, such as it was with the Potato and Green Chile Soup. Magic Bistro has a house soup (chicken tlalpeño, which itself is made with chipotle). Any other soup choices (including the potato soup) are the soup of the day, and these tend to follow the theme of Southwestern cuisine. I thought the potato and green chile soup was excellent, and I would say that for people from El Paso the spiciness level of this soup would be well within what most would consider to be normal parameters (as in most places, people here do not like it too spicy). 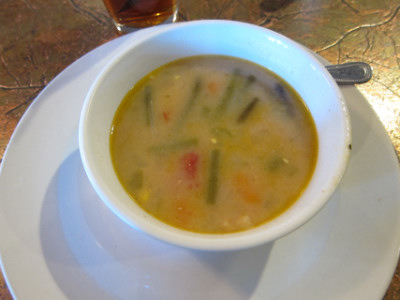 A surprisingly good soup was the Fish Soup, made with tilapia and vegetables. This one was not spicy, and was served on a day when I was trying to recover from an illness, and the flavor and substance was able to completely hit the spot with me. Possibly because of the circumstance I considered this to be better than the potato soup. This was another soup of the day, though, so I do not know how often it is available. 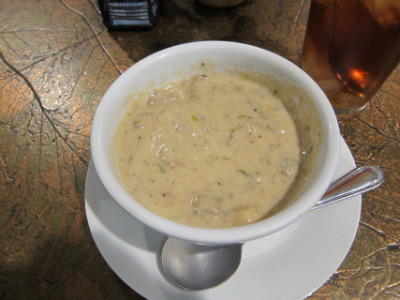 The Steak and Potato Soup comes very close to being a meal in itself. This was another soup of the day. 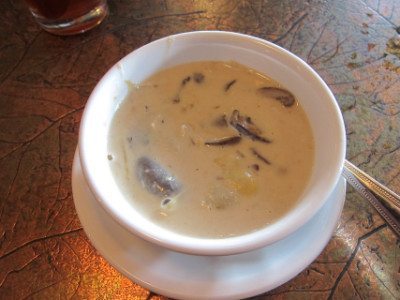 The Mushroom and Artichoke Soup was flavorful, but I could not chew part of the artichoke (which was uncharacteristic of most of the food here). 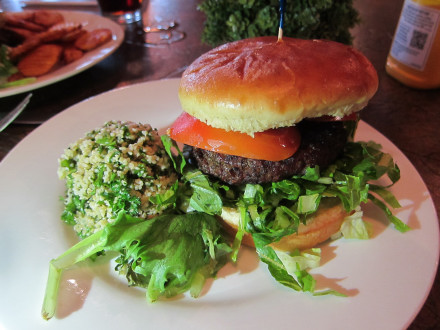 Bistro burger with a side of tabouli

The Bistro Burger is one of the restaurant’s best dishes because of the flavor of the meat and the quality of all the ingredients. For a topping I asked them to omit the mayo and give me mustard instead, but it was a standard store bought mustard (I was expecting something more gourmet than this). Still, it is a good burger.

Side Dishes
All sandwiches, wraps, and half-soup half-sandwich combinations come with a side dish. All the ones I have tried have been good, and there is enough choice to pick something that seems to fit (such as Potato Salad with what was essentially a barbecue sandwich).

The Tabouli has always been good, although probably not totally a Middle Eastern style.

Other Comments
Another nice feature of this restaurant is the drinks. There are some interesting ones such as Pellegrino water. I liked the iced tea not so much for being better than at other restaurants, but for being less expensive (this is less true, though, after the Covid pandemic).

The lunch menu is limited to sandwiches, wraps, soups, salads, burgers, pasta, or quiche. Still, the way they let you combine a soup and salad with a choice of side dish, gives a good variety of items.

Dinner had more interesting choices, but has been put on hiatus as of 2022