LM Restaurant is one of several Asian and other ethnic restaurants along the eastern end of old U.S. Highway 66 in Amarillo, a couple of miles north of Interstate 40. While many tourists flock to the Big Texan Steak House on the Interstate, few seem to be aware of the decidedly “untourist” Southeast Asian restaurants that serve the community of immigrants and refugees from Laos, Vietnam, and surrounding countries as well as a growing number of the “non-ethnic” local residents who seek out cheap and interesting cuisine.

LM Restaurant is attached to the LM Market that sells mostly Thai imported goods, and this in itself is worth exploring. I particularly liked the selection of Thai fruit drinks at a very reasonable price. Next to the dining room is a large hall that houses large parties and live Lao music, as well as serving as the smoking area of the restaurant when not being used as an entertainment hall. 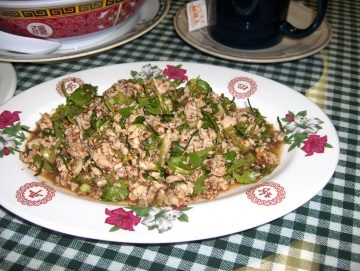 On my original visit to the restaurant I asked for a recommendation for a typical Laotian dish. I was told that the Lao people like beef jerky, but I settled on Lab (pronouned laap), a Lao-style salad with small chunks of chicken, chiles, other ingredients that I did not recognize, with slices of cucumber and Thai eggplant on the side. This turned out to be one of the most delicious Laotian food items out of the several things I have ordered at various Amarillo restaurants. The mint and cucumber provided a cool contrast to the spicy chicken. Another interesting aspect was the temperature. It tasted as if the dish was both hot and cold– probably because of the cooked chicken and the cold vegetables. Lab comes with either beef or chicken. When I visited LM Restaurant the second time the waitress said the chicken version was her favorite, so I ordered the same thing as on my first visit. I do not know if the beef or chicken is considered a more traditional version of the dish, but I thought the chicken was quite good. It should also be pointed out that the traditional version of Lab is quite spicy. I would put the spice level at about 7 or 8 out of 10, with 10 being the spiciest dishes I find in American restaurants. 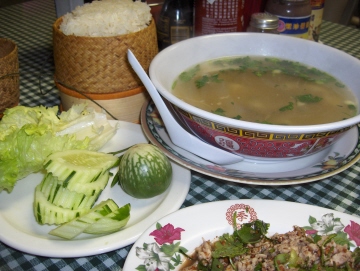 On my first visit in 2004 a large bowl of Chicken Soup was served with the lab for a total cost of $5, and also providing a mild contrast to the spicy salad. I do not know what happened, but on a return visit the soup was both more expensive and not as flavorful as it had been originally. This does point out, though, that several types of soup are available. The lady who currently cooks at LM Restaurant seems to follow the Asian tradition of adding her own touches to the recipes and perhaps changing some of the food daily for variety. While I did not care as much for the soup the second time, I thought the lab salad was better than on my first visit.

LM Restaurant has a fairly extensive menu, and also seems to have some Chinese and Thai dishes. I would judge the number of traditional Lao dishes to be about a dozen or so, although the distinction between Lao and Isan, or northern Thai food, is sometimes quite small. The menu does not really explain all of this, nor does it provide much description of the various items. The waitress suggested, though, that the most popular Lao items served were the lab salad, beef jerky, and seafood soup.

Also not explained on the menu is the fact that a basket of Sticky Rice (shown in photo on left) is a traditional supplement to a Lao meal, and is a good fire quencher to offset the hot spices used in the food. I also happen to think sticky rice is delicious, with the version served at LM Restaurant being probably the best I have tried in Amarillo.

LM does not make its own Thai tea, but serves ones from the market next door. The jasmine tea I ordered, though, went pretty well with the food.

I have eaten at two Lao restaurants in Amarillo that are now closed, but currently the only ones that specialize in Lao food are LM Restaurant and Ly’s Restaurant a short distance to the west where Houang’s used to be (Thai House also serves some Lao dishes). Ly’s provides pictures of all the dishes, which to me seems like a great advantage to first time diners of Lao cuisine (one which I did not have on my fist several visits to the various restaurants). While LM Restaurant lacks pictures, the waitress takes all the time necessary to explain the food and find out what the customer would like to order. I certainly feel that customers at LM will be given all the help they need to explore the world of Lao and northern Thai cuisine.