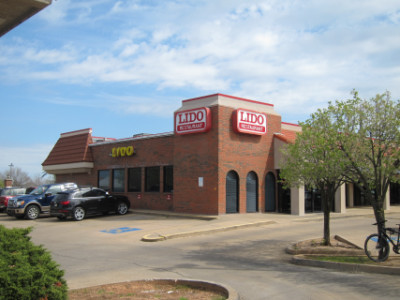 Update Aug. 2021: In Mar. 2021 the owners of Lido retired and the restaurant was closed for a couple of months. It has since reopened and reports are that it is continuing with the same food and same menu as before.

Lido was the original Vietnamese restaurant to become popular in Oklahoma City, opening the door for several others serving the same type of food to become successful. In the 1990’s Lido opened a second restaurant in The Village that later became Kim Wah (and had separate ownership). Lido and Kim Wah are the two places that I have used as the standard when I try noodle bowls in OKC or other cities such as Seattle.

Lido was a rather cutting edge restaurant at the time it opened, giving the Heartland a taste of Vietnamese food for the first time. Now other restaurants, such as Golden Phoenix, offer a larger Vietnamese menu. The argument is also made that other Vietnamese restaurants are more authentic than Lido. I certainly think Golden Phoenix has more of what I would call authentic Vietnamese dishes. Lido seems to be living by the adage, “if it ain’t broke, don’t fix it.” In my opinion Lido gives customers a good representation of Vietnamese food that is flavorful, authentic, and explained on the menu so that people know what they are getting. 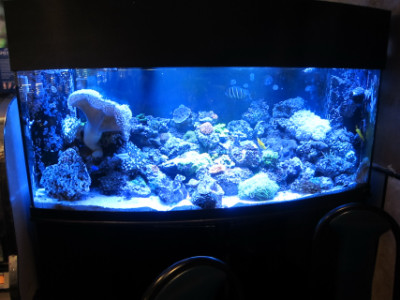 Lido also provides a pleasant dining room and good service, something that is important to many people (along with the good food), regardless of how extensive a menu it has for authentic Vietnamese dishes.

Lido loses some credibility in being called authentic by having a Chinese menu that is American style (unlike restaurants such as Golden Phoenix that has a separate menu of authentic Chinese food). I have tried the Chinese food at Lido in the past, and there is nothing wrong with having it on the menu, but I think people will probably be more satisfied with the restaurant’s Vietnamese food– that is really what they do best.

There is also a small French menu, reflecting the long time French influence in Vietnam. The French menu here is nothing compared to the food served in some of the Seattle Vietnamese restaurants, but it is a start. 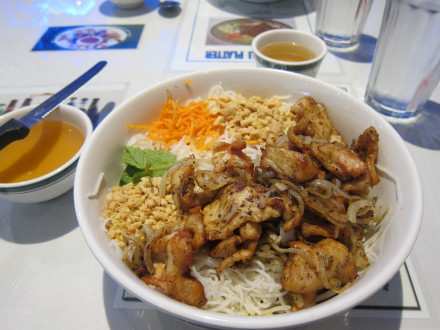 Vermicelli bowl with chicken and lemongrass

The Vermicelli Noodle Dishes are really the specialty of the restaurant, and the dishes I think they do better than anyone else (although the ones at Kim Wah were very similar). The ones here and at Kim Wah (which used to be Lido’s branch restaurant) are possibly equaled by others I have tasted, but I do not think they have ever been exceeded. They have the right mixture of mint, vegetables, peanuts, noodles, and meat. My favorite vermicelli noodle bowls are the ones made with lemongrass, and these are available at Lido (although I found out they are not included on the lunch menu). 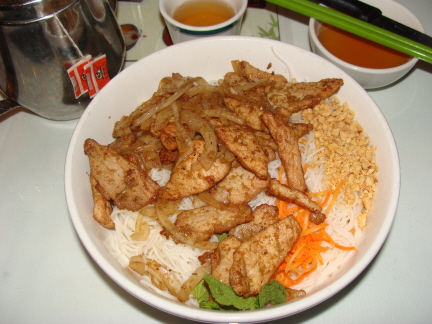 Vermicelli bowl with pork and lemongrass

The vermicelli bowls come with a special nuoc mam sauce that I think is a less strong version of traditional Vietnamese fish sauce. Most Vietnamese restaurants in the city (and in other cities I have tried) seem to serve the same kind of sauce, and whether it is authentic or not I think it is very enjoyable (and is the kind of sauce most people would expect). 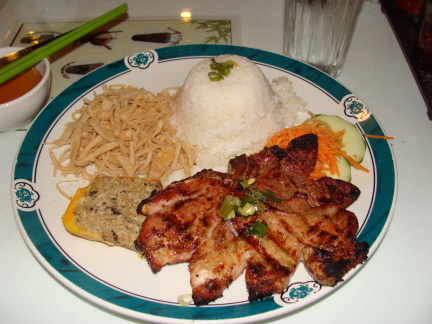 The Pork Chop at Lido was quite a good dish, and this is one of the restaurant’s more authentic Vietnamese choices that is popular at other restaurants such as Golden Phoenix. The pork chop on a rice plate came with an egg quiche, cucumbers, and shredded pork as side dishes. I had a very similar dish at Golden Phoenix, and in my opinion all the side dishes at Lido were a little disappointing in comparison. However, the pork chop was one of the best I have tried, and was certainly at least as good as the one at Golden Phoenix (but I really thought it was better).

Other Items
For many years Lido was the only restaurant I could find that served canh chua, called Hot and Sour Chicken Soup on the menu (not to be confused with Chinese style hot and sour soup). This soup, which is a meal in itself, is made with lemon juice for the sour part, red chiles for the hot part, pineapple for a sweet flavor, tomatoes, celery, and bean sprouts for a delicious traditional Vietnamese soup. It also comes with catfish or shrimp, but the one with chicken is the version I tried at Lido. Although the soup at Lido was good, I cannot say it was the best version of this dish I have had.

Other Comments
Lido has a Chinese menu, with many of the lunch specials looking as if they are American style and some of the dinner menu items looking more like traditional Chinese food (I have not ordered any of these items on recent visits, though, so that I could give a description of them). The Chinese Hot and Sour Soup, though, has been quite good over the years (and a similar version was served at Kim Wah).

While most dishes I have tried at Lido have been better at other restaurants, this is not true of the vermicelli bowls. The pork chop also gave me reason to want to return, and I think Lido will always be on my list of notable Vietnamese restaurants.

Note: The Kim Wah Restaurant which I reference is now closed, so as far as I know there is no place which has Lido’s recipes except Lido itself.