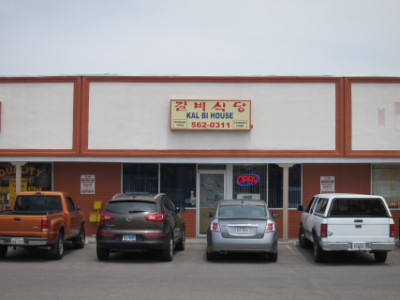 I have two disclosures to make about Kal Bi House. The first is that prior to my visit in 2019, my last visit was in 2004. I made quite a few visits prior to that time, and for a while this was one of the restaurants I visited most frequently. I think the food has not really changed in that time, so my observations then would still be valid now. The facts and opinions written in my previous review will be carried forward to this one, but what will not be included are any statements that would be based on my memory from this time period.

The second disclosure is that despite my many visits, I really have not tried very many items on the menu. I have experimented a little at Han Il, Seoul Restaurant, and Young Vin, but for some reason I have not done as much here. I am writing the review based on what I have tried, but at the same time I may not have given the restaurant much of a chance by only trying a few items. This can be remedied in the future, but right now I think I have not tried enough items at Kal Bi House to give a complete picture of the food or to really give what I consider to be a fair assessment of it. Still, since I have disclosed this fact, I will press on with what I have. 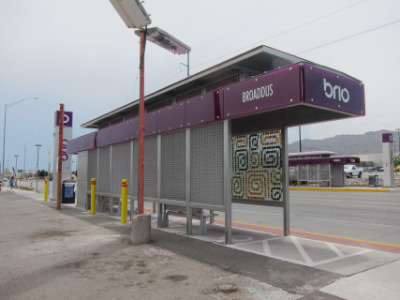 The Brio stop in front of Kal Bi

Kal Bi House is about to become more accessible to many of the city’s residents. A stop for the Dyer Street Brio transit line has been built directly in front of the restaurant, and I believe this line will begin service sometime soon. Brio has limited stops and offers a shorter travel time from downtown to any of the stops than is experienced on the regular bus lines.

Lunch Special
Lunch is a very good time to go to Kal Bi because of the price. The meat portion is smaller than on the dinner plate, but customers still get all of the vegetable side dishes they can eat (I think this is a literal statement because I have found in the past that customers can get refills if they do not have enough of anything).

In the “old days” I used to sometimes get Chinese food which was on the lunch special (I do not believe it is on the dinner menu, though). This was an attempt to eat healthy, although I found out over time that the Chinese food here has MSG (the Korean food does not). For a while I had a vegetarian diet and this made sense, but for the great majority of people I would say to order the Korean food (they have fish and other items if you want to get away from eating meat). 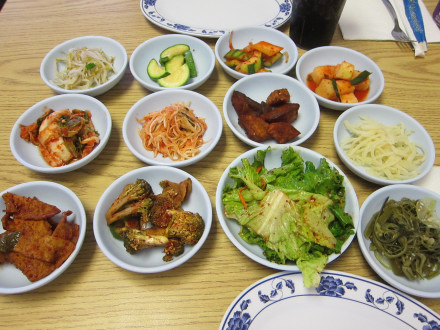 Vegetable side dishes served with dinner

Ordering dinner here is almost a guarantee that you will have too much food, but they do let you share (and of course you can take items home, including the vegetables). The vegetables I was served are shown in the photo. The only thing I noticed that was different from about twenty years ago is that they no longer have the small fish which you eat in their entirety (at least I did this). I think what they have now is better, though, and I certainly do not really miss the small fish. There were a couple of vegetable items that I did not eat but generally they were excellent, and I think this is probably the main reason to come to Kal Bi House. 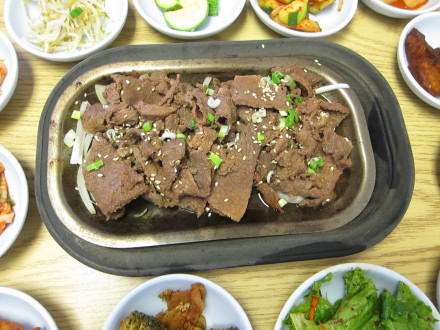 On my most recent visit I tried Bul Gogi, which is probably the restaurant’s most popular dish (and is the first one listed on the menu). This is marinated and had a good flavor, but the meat seemed dry. I think the meat is perfectly fine, but just not the best cut (and I am sure this is the reason they marinate it).

My “Old” Reviews
From 2004 and earlier I had several observations which I think would still apply. At that time I said that the bul gogi was better at Young Vin, but that the entire meal was better at Kal Bi because of the total experience with the vegetables. Today Young Vin is on Montwood and is an “Express” restaurant, so I am not sure how the two would compare.

At that time I also said that the barbecue chicken at Young Vin compared to the one here, and that the one at Han Il was better. I mentioned that the chicken at Kal Bi was gristly (I am not sure if this was the case at Young Vin).

I tried the seafood soup at Kal Bi and found it to have a good mixture of noodles, vegetables, and seafood in a slightly spicy red broth, although I only rated it as four out of five stars.

The kimchee at Kal Bi was my favorite out of any restaurant in El Paso, and this is one of the side dishes served with every meal. I also liked the turnips, cucumbers, and fish cakes (these are items I particularly liked on my recent visit as well). 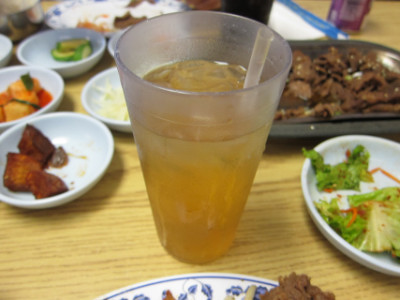 I particularly like the Korean Iced Tea here, and use it as the standard by which I judge the others (although some Korean restaurants do not even have it).

Other Observations
The vegetable side dishes and the Korean iced tea are the main items that draw me to Kal Bi House rather than the other restaurants in town. You get the same side dishes whether you go for lunch or dinner.

The lunch menu lasts until 2:00 p.m. I would advise coming at lunch time, although I think the dinner menu has some items that can be explored for a deeper dive into the world of Korean food. I just have not done very much of this, though, so I cannot give advice about what to order.

Some of the other Korean restaurants either admit to using MSG or I suspect they do based on my reaction to the food. Kal Bi House does not, unless you order the Chinese lunches (which I am not even sure are on the menu any more).

My rating is skewed more toward the main dishes with only a little consideration for the vegetable side dishes. The vegetables are excellent, though, and probably better here than anywhere else.