I envisioned this blog as a means to express various thoughts that did not fit into the format of my restaurant reviews, and of course my thoughts can change over time.  My thoughts about Japanese food are largely shaped by my visits to Seattle (and later by two extended visits of a few months).  If I am ever able to visit Japan I’m sure this will greatly expand my knowledge of one of the world’s best cuisines (and I certainly hope this can happen).  For now, though, I just have my rather limited knowledge with the invitation for others to share theirs.

It is understandable that people in Oklahoma City (and everywhere) are mainly interested in what is good and not in what is authentic.  I have found that the most authentic Japanese food is the best food, but I just express my ideas and not everyone has to agree with my beliefs.  I do not consider sushi rolls with cream cheese and avocado to be traditional Japanese food at all, but I would not argue with those who call it authentic because I believe these are being adopted by some restaurants in Japan.

In contrast, though, I have never taken Japanese steakhouses very seriously, because I do not believe this is part of traditional Japanese cuisine.  Some restaurants in the United States are good though–it is just a matter that most seem to be overpriced.

Seattle has a third type of restaurant that I would call nontraditional known as teriyaki restaurants.  I have found these to be a good bang for the buck although the teriyaki sauce tends to be sweet (it certainly makes a good lunch at least every once in a while).  Teriyaki House in Enumclaw was my favorite, although there were some good ones in Federal Way as well (these restaurants seem to be concentrated in south King County).

The two most authentic Japanese restaurants I have found in Oklahoma City are Tokyo and Sushi Neko, although there are some others I have not tried (the one on North May in the Lakeside area near Wilshire Blvd. looks like a good possibility).  Personally I like Tokyo so much I rarely even think about going anywhere else.  The problem in Oklahoma is getting fresh fish (fresh fish is a must for Japanese cuisine).  I will not say necessarily that Tokyo has the best fish, but I have always enjoyed it (particularly the salmon).  Mainly, though, I just like the flavor of the food at Tokyo. 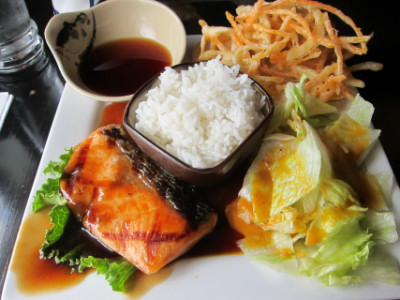 Oklahoma City has an abundance of strip mall sushi restaurants, though, and these can also be a good resource.  I do not care much for the California rolls and other specialties of these sushi places, but many of them have more traditional Japanese food on the menu as well.  Without arguing whether these restaurants are authentic or not, I will say that I have found Tsubaki at MacArthur and Memorial Rd. to be particularly good.  I think three of the four times I have gone there I have ordered tempura udon, a Japanese noodle soup with the shrimp and vegetable tempura providing most of the flavor.  Even by Seattle standards I like the tempura here, and I do want to share this with readers. 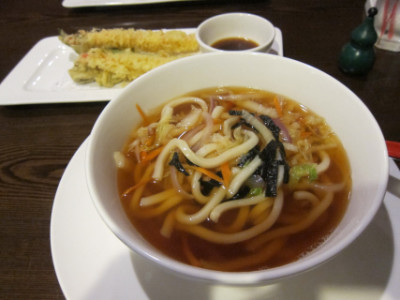 I will say that good Japanese food is not limited to the west coast, and Oklahoma City definitely has its share.