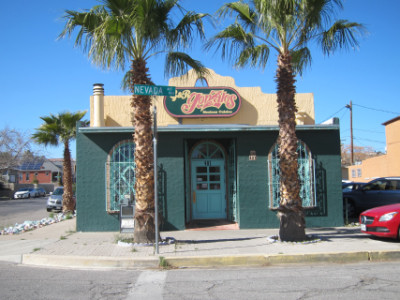 G&R (also known as Gonzalo’s G&R) Restaurant is one of El Paso’s “classic” restaurants, having been in operation since 1960. The original restaurant was located on Myrtle Avenue near Kansas Street. My first experience with G&R was in 1977 after it had moved to Nevada Avenue. One of the original owners’ children operated a branch on Pebble Hills for a while, while their daughter continues to operate what is now the restaurant’s only location.

G&R serves traditional border style Mexican food, which I would say is highly influenced by cooking styles in northern Mexico but modified by what is locally available in the El Paso area. G&R also seems to have a strong connection with New Mexico in the chiles it uses. The enchiladas are among the spiciest ones served in El Paso, and other items such as the chile con queso are on the spicy side as well. The salsa is one of the spiciest and most flavorful in the city as well.

In the past I asked how they made the beans, and they said with lard (I assume they still are). This is another indication of traditional El Paso style Mexican food, although a number of restaurants have switched to vegetable oil because it is considered to be healthier and it really has little effect on the food’s flavor.

The dining room is really not designed to accommodate a huge crowd, and the restaurant is not located on a major street where a lot of people would notice it passing by, but it seems to thrive on loyal customers who consider it a favorite neighborhood hangout. In my case the “neighborhood” is the downtown area where I used to work, and G&R was definitely one of my favorite places located nearby. 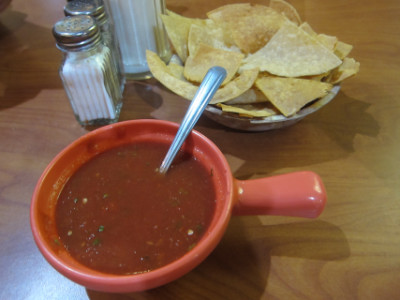 Chips and salsa are part of every meal here, and I think the Salsa is especially notable. It is fresh, flavorful, and spicy (and if you are like me you will make a special effort to take home any leftovers). 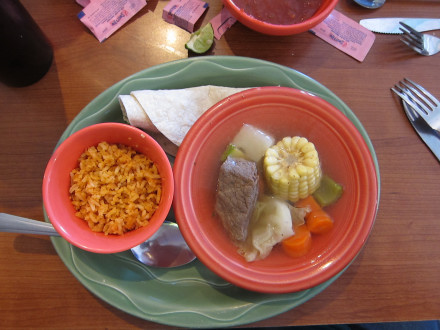 Some restaurants use Caldo as an appetizer, serving customers a small bowl with every meal. At G&R it comes in a rather substantial serving and is considered a meal, although a lighter meal than many other menu items.

I particularly like the Chile con Queso here (compared to the ones at other restaurants). This comes with a very spicy green chile, and is one of the items with a notable New Mexico flavor. This can be ordered as an appetizer, but is also one of the items on the combination plates. 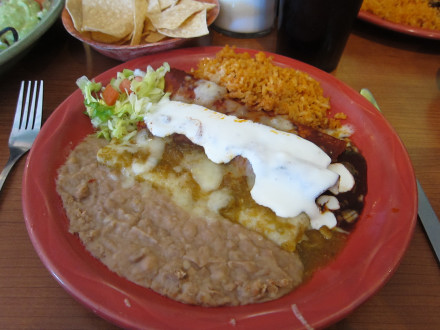 I think the general rule here is that the green chile is spicier than the red (thus the green enchilada would be the spiciest one). Both colors are spicy compared to most other restaurants in El Paso, and I think both of them have a good flavor (on the Tri-Color plate I particularly liked the green chile but most of the time I order the red and I think this is very good as well).

I think the rice and beans are both five-star quality, and it is important to note that all the elements of a meal here are good, and not just the main dish. 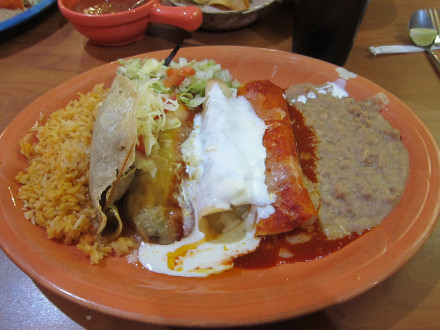 Several combination plates are available, but the Mexican Plate Special has two of G&R’s best items–a red enchilada and a chile relleno. The Chile Relleno has a thick breading which I like (these are very non-greasy) and the chile inside the breading has a good flavor. They do not seem to be consistent about the sauce on top of the chile relleno–I have seen red, green, and New Mexico style (no sauce). I did not note that any of these had a better flavor than the others. I also did not note the type of cheese that was inside so it must have been the standard cheese that most restaurants use.

The Taco is traditional Ciudad Juarez style and is very flavorful. For me its negative point is that it has cumin (but I think restaurants in Ciudad Juarez typically do it this way).

The Guacamole had a good taste but was surprisingly bland considering the flavor of the rest of the food.

One alternative to this is the Super Special Plate which omits the taco and adds chile con queso. To me it is well worth the extra cost (25 cents more than the Mexican Special Plate on the current menu). I have not ordered it on a recent visit, though, and therefore I do not have a photo that I can show.

An Overview
For a while the food at G&R seemed inconsistent, but all of my recent visit have been consistently excellent. I have been for both lunch and dinner, and the food seems to be the same all the time.

I am the happiest here when I can get a combination plate that has a number of items (this is because everything is quite good). The only thing I do not mind skipping is the taco and this is because it has cumin (the owner confirmed to me that this is one of the ingredients). I did not know until recently that cumin is one of the ingredients in much of the classic Ciudad Juarez style food, and apparently its use is widespread in El Paso restaurants (especially the tacos). Unlike some other bloggers I do not gag at the thought of eating cumin, but like them I can say that cumin is not my first choice of flavoring for Mexican food.

The red enchiladas here are about on par with most other restaurants in town, but the green enchiladas are a rarity because they are spicy and have a flavor like the ones in New Mexico (I think this is because of the chiles G&R uses versus the ones used by most restaurants). The chile con queso is another excellent item here, and I think uses New Mexico green chile as its base.

I will make a note that at times the enchiladas are close to a five on the chile heat level, and this is in line with New Mexico restaurants where the spiciness depends on the chile crop that year.

Cuisine: Mexican El Paso
Cost: $$
Hours: Closed Sun.
Accessible: Yes
Smoking: No smoking
Alcohol: Has a bar (I am not sure what drinks are served)