While growing up, my dad and uncle shared their household with my great grandmother from Belgium, giving our family a very strong link to the French culture. My dad’s generation had never attempted a serious study of French that I know about, and French conversation in the household consisted of a few phrases.

These stories, though, prompted an interest on my part to become at least a little familiar with this part of my family tradition. An obvious place of interest to me is Lafayette, the unofficial capital of French Acadiana where French families settled after they had been “kicked out” (I believe that is the technical term) of Nova Scotia and surrounding provinces by the British settlers during the “Great Expulsion” from 1755 to 1764. Some of these refugees found homes in the Thirteen Colonies, but a large number arrived as a group in 1765 in what was then the Spanish ruled colony of Louisiana. Because of their numbers, though, they and other French colonists preserved French as the predominant language of the area, and Louisiana fell back under French control shortly before the time it became the American “Louisiana Purchase” in 1803.

Remarkably, French remained the primary spoken language in Acadiana through at least the 1930’s and early 1940’s (the boundaries of Acadiana being based on the areas where French was spoken). When I visited in 2017 I can say that I really never heard any French spoken by the residents there. I was searching for it (such as listening to French radio stations, etc.), and I know it exists, but today this is not a French speaking area.

Through sources such as YouTube you can find videos of Cajun French, and it is obvious that the expert speakers are primarily of the older generation. In the short term the language has not died out because there is a diligent effort by much of the younger generation to keep it going. In the long term, though, it is hard to know what is going to happen.

This narrative is meant to give a background for some things you can see when you are in this beautiful and totally enchanting area. 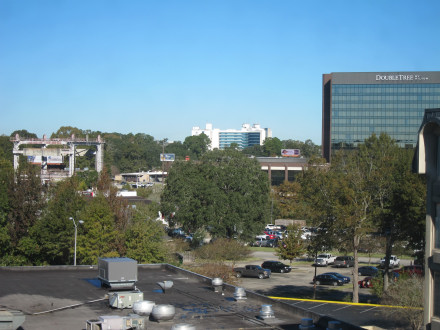 An area that may at first look like downtown is the “commercial district” along Pinhook Rd. located just south of the historic city center. This area has a wide choice of hotels and is away from the Interstate traffic (Interstate 10 is about four miles to the north). 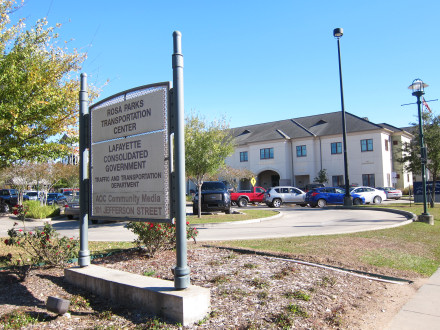 A good place to start an exploration of downtown Lafayette is at the Rosa Parks Transportation Center at Jefferson St. and Cypress St. To get here from Pinhook Rd. go east to the Evangeline Thruway where you turn north, turn left when you get to Jefferson Boulevard and go about four blocks until you see the large public parking area (parking is free). This is also the parking lot for Amtrak, Greyhound Bus, and several city and parish offices. 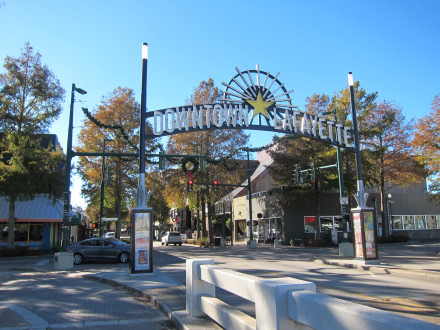 While headed west on Jefferson you will also notice this entrance sign to downtown Lafayette (this is the historic downtown area). This view is looking west from the parking lot shown in the last photo. The building at the left edge of the photo is Dat Dog, a casual restaurant that I went in to investigate, and found that it could be of interest to foodies (although I was not able to try it at that time). 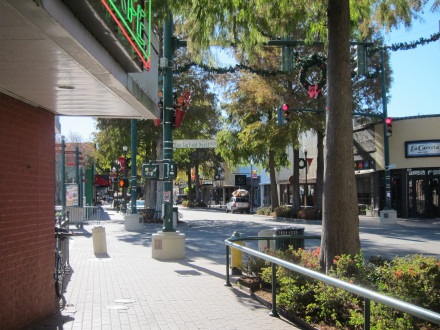 Along Jefferson Street are some shops, restaurants, bars, etc. that could be of interest to visitors. Mainly I thought it was very visually appealing, and not typical of what you would see in a city’s downtown (just south of this area is the main part of downtown with more traffic, parking lots, etc.). 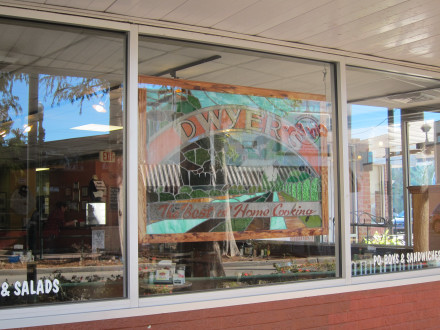 I wasn’t there at the right time, but Dwyer’s Cafe (323 Jefferson St.) is known as the home of the “French Table” where people gather at 7:00 am to enjoy breakfast and speak French. Of course I think Dwyer’s also has good food (which I also was not able to try on this visit).

There is a YouTube video in French showing the group who meet at Dwyer’s as well as other efforts to promote the French Language: Louisiane 2010 – Parler français. The video caption says some of the people who come learned the language from their grandparents but did not know where or when they would have a chance to practice it today (and the meeting at Dwyer’s gives them the opportunity).

In fact, if you wish you can find a multitude of videos about Cajun French on YouTube. My big takeaway from visiting Lafayette, though, is that they speak English. If you want to practice your French you may have to seek out someone who can converse with you.

For those not interested in the language the Cajun food is reason enough to visit Lafayette (but I think there are opportunities to experience the language as well). Most of all, though, this is a very livable mid-sized city with plenty of food choices of all types, and it is a good base from which to explore the surrounding area.

This area of Louisiana certainly seems to rank with northern New Mexico as being one of the most unique cultural areas of the United States. One commonality of these two areas was the homogeneous language and cultural group each had that allowed their native language to survive, and which to some extent is present today.

I want to be sure to mention Poche’s, in Breaux Bridge a few miles east of Lafayette, for excellent home style Cajun food.

“Lagniappe” (Additional Information Available on the Internet)
While Lafayette and the surrounding area may not always exude an obvious French culture in its day-to-day life, there is much to discover just below the surface, or simply by knowing where to look. An excellent source seems to be the Lafayette Travel web site, with links to events, attractions, food, and any other information that might be of interest to residents and visitors (I compliment them on the amount of information that is available on the site).

Outdoor concert series are often scheduled multiple times per week (with the most taking place during the best weather seasons of spring and fall or at the appropriate time of day for the musicians’ and audience comfort). Indoor concerts and dances are also available on a frequent basis.

Much of the local music is performed in Cajun French or has French roots, and this music has continued through the generations at dances and just about anywhere people got together for a social occasion or to have a good time. The Lafayette Travel web site seems to provide information about the easiest ways to find whatever musical event is going on.

Lafayette and all the surrounding cities celebrate their French roots through the local cuisine, and the Lafayette Travel site offers a multitude of suggestions. My experience is that a little bit of searching on web sites can result in very positive results in finding Cajun food or other types of local cuisine. In fact, even many people in New Orleans say the best Cajun food is not there, but in Acadiana.

The web site even has a list of places with a “French Table” where people can get together to practice French (and usually enjoy food at the same time). I was unable to find this list through the web site’s menu, but located it through a Google search which I will share:

According to the list Dwyer’s Cafe has their meeting every Wednesday at 6:30 a.m. This is only one of nine places currently listed in Lafayette which have a French Table, with others available in surrounding cities.

My Overview of All of This
I really have a couple of takeaways from visiting the area: (1) If you are interested in exploring any aspect of French culture in Louisiana it is easy to find with a little bit of searching, although it will definitely not be a situation where you will feel like you are in a foreign country and do not know the language, and (2) If you are coming primarily for Cajun food I think it will definitely be worth the trip–any cuisine is its best at the source, and I definitely found that to be true here.