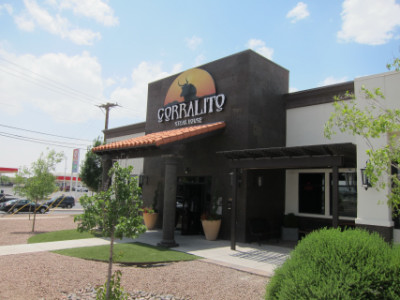 Corralito’s web site says it has been in business for over 25 years, but I have only noticed the El Paso restaurants recently. It now has three locations in El Paso and two in Ciudad Juarez, firmly establishing its credentials as a Mexican style steakhouse located in two countries.

A “Mexican style” steak house can be somewhat loosely defined, and in this case they use USDA choice meat but with Mexican side dishes (enchiladas, guacamole, etc. and with chips and salsa served with every meal). I am not a steak expert, but in my experience from Ciudad Juarez and Chihuahua the steak tastes very “natural” with a minimum of anything that I might call “artificial.” The steak at Corralito does taste marinated, so it is not a bland tasting steak but merely one that I think tastes like real steak.

Corralito serves fish and chicken as well as steak, and there are Mexican items such as enchiladas (although I think the enchilada only comes with a steak and is not served as a separate item). The menu also includes other items such as tortilla soup, milanesa (on the lunch menu), etc. that I would think of strictly as Mexican dishes.

It is my understanding that a steak house is more casual than a regular steak restaurant, and Corralito fits the definition in this regard. The restaurant is not cheap, but patrons can eat here without breaking the bank. 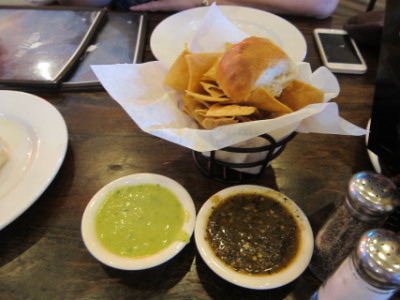 The chips are thick (Mexican style), and they come with two types of salsa, including one with roasted jalapeños (the dark colored salsa). Neither of the salsas are extremely spicy, and both have a good flavor. 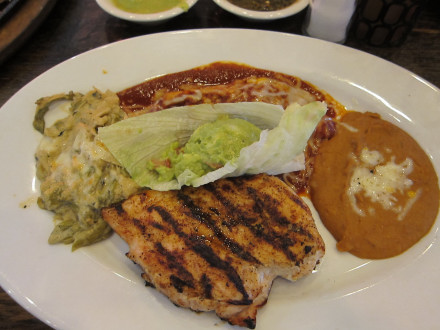 All the food here is served the way it would be in Mexico, but there are some items on the menu that are more readily identifiable as “Mexican food.” One of these is the Chicken Tampiqueña which is a chicken breast served with guacamole and chile con queso, with an enchilada on the side. Compared to others in the city I thought the chicken was better than most, while the other elements were about average (which still makes them very good).

Enchiladas were not anywhere else on the menu, so it seems that they only come with the tampiqueña (you can order either the chicken or a steak version of the tampiqueña).

Steak
I have not ordered the steak here, but I tried a sample of the Top Sirloin. It tasted marinated with a good flavor, and I would say this is one of the better steaks in the city.

An Overview
The good about this restaurant is that you can enjoy a good steak that is not prohibitively expensive, and the selection of items is really pretty impressive for a steak house. I would rate the chicken as being even better than the steak, with it being in the top tier of chicken dishes I have found in El Paso.

Some Yelp reviews indicate that the service is not good at all of the Corralito restaurants, but this was not the case on my visit. The restaurant was full when I went and it is obviously popular, so it is possible that service is slower at other times when this is the case.

The Mexican items are not ones I would call the best in El Paso, but the enchilada I had was very good and was devoid of some of the pitfalls I sometimes see (such as being greasy). This is not a Mexican restaurant, though, where you can order items such as a Mexican combination plate or an enchilada plate.