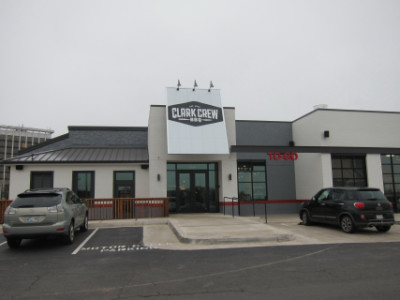 Before Clark Crew opened reports appeared with increasing frequency in the local food and restaurant news about the upcoming restaurant, progress made on renovation of the former Macaroni Grill into what was planned as one of the city’s largest barbecue restaurants, and the food that all of us could look forward to trying. Some had already experienced the owner’s award winning food from the numerous barbecue competitions he had entered, and the almost equal amount of awards he had collected from his entries.

The publicity about award winning barbecue being available to the mass market actually created a “mass market” of people being willing to be on a waiting list that I heard lasted up to two hours just to get the opportunity to have a seat in either the dining room or the even larger outside patio to order a meal at Clark Crew. The reviews indicated that it was worth the wait, but I was still wondering how long it would be until I had a chance to try it in what I would consider to be a reasonable waiting time.

The opportunity for me to try it came about rather unexpectedly when the Corona virus epidemic was just beginning to hit. My first visit to the restaurant happened to be on the last day restaurants were open before the city mandated that all dining rooms be closed and that restaurants serve takeout only (I believe at that time outdoor patios were not allowed to operate either but later when patio dining was permitted Clark Crew was well suited for it with their 500 seat capacity outdoor dining).

The day I went the restaurant seemed to have a large contingent of staff (although I do not know if it was their full crew). It felt very surreal, though, to see almost all of the tables in the dining room empty, I think partly out of panic that news reports had caused about going to restaurants at that time. The irony was that with the lack of customers in the dining room, there was no problem in social distancing if people felt that this was an issue.

While I was dining the staff was called to an impromptu staff meeting from which I could not hear the conversation, but it was obviously related to the impending closing of the restaurant (although as I mentioned it was not technically closed because they were allowed to serve takeout and I am not sure about the city’s regulations about patio dining at that time). Most restaurants at that time, though, reported that even with takeout being allowed they were only doing a small fraction of their normal business when the regulations about closure went into effect.

Nevertheless I felt that I experienced the restaurant’s normal food and staff operation. The only difference was that there were very few customers. 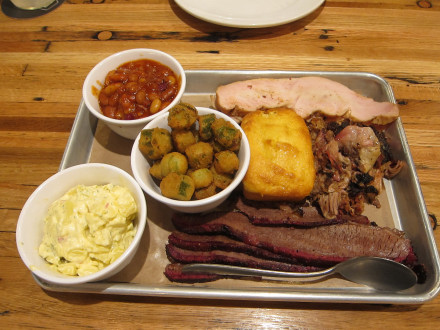 The Three Meat Tray is a good way to sample what is available at Clark Crew, although even with this there were a couple of other meats I wanted to try. I did order extra vegetables because there were two of us sharing the plate, but in terms of quantity I think the tray plus one extra vegetable would have been about right.

Since this section is about the meat I will mention the highlights: brisket, pork, and turkey. Okay, that is all of them, but apparently that is the way it is at Clark Crew.

Actually I would have to say that the Brisket was probably the most impressive of the three. I am somewhat of a snob about brisket having enjoyed it when I lived in Austin much like I do some of the food items in Oklahoma City that are common here but are never the same when I go anywhere else. I will have to say that the brisket here was almost as good as I remember from Iron Works Barbecue in Austin (in the days before Franklin Barbecue and other restaurants opened which have possibly taken the crown as the best in the city).

The Chopped Pork was a meat I rarely see mentioned in Clark Crew’s reviews, and I did not think it was a contender for the best meat on the tray. I do think, though, that it is a good complement to the others I ordered. The meat was fatty, which is neither good nor bad–just something that some people would be interested in ordering while others probably would not.

The Turkey was notable because it was so much better than most of the ones served in other restaurants. This is actually the one I would order if I only had one meat choice out of the three–not because it had a flavor that was better than the brisket, but because of the whole package of flavor, texture, and the way that turkey does not make me feel that I have had a heavy meal.

I did not pay a whole lot of attention to the sauce. I thought it was fine and for now I would say it is neither better nor worse than at other restaurants. I did pay attention to the flavor of the meats without putting sauce on them. In Austin many say that good meats (particularly brisket) does not need any sauce. Personally I did not find that to be true in Austin and it was not true here (I liked all of the meats better with sauce).

There are other web sites that have reviews of other meats, and I think all of them sound like good possibilities.

Side Dishes
There was definitely one standout on the side dishes–the Cornbread. They must have an army of workers in the kitchen churning out home made cornbread because there was nothing institutional or mass produced about the flavor, texture, or freshness of it. Cornbread comes automatically with every order (at least on the trays). Here I guess it is not really a “side,” it is a main part of the meal.

Next on my list were the Beans, which were as good here as I have experienced anywhere.

The Okra was a real treat and had an excellent flavor, but was a little less crispy than I usually like.

The Potato Salad was something that I found to have a less interesting flavor than at some other restaurants–this will probably be a pass for me the next time (but I still rate it high because it is made the way that I think a lot of people like it).

Other Items
One interesting feature of Clark Crew is that the building used to house a pizza restaurant, and they use the ovens that came as part of the building to prepare some very well regarded pizzas.

They also serve steaks, pizza, hamburgers, and other items. From the reviews it sounds as if the restaurant puts as much care into their preparation as they do the barbecue, rather than being the all too common situation where the rest of the menu seems like an afterthought. 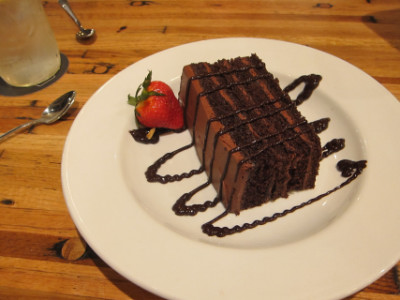 I tried the Chocolate Cake, a “featured cake” which is not a regular menu item but was the daily special. Although it was enjoyable, I have now had more time to look at the menu and I think next time I will try the banana pudding (which to me is more traditional with barbecue).

A Summary
Barbecue in Oklahoma tends to be very inconsistent, and some days it is not as good as others. I consider it a good sign that on one visit I experienced the consistency of quality that I would like to have all the time (all the meats were cooked equally well and with the vegetables I had different opinions about the flavor but not the execution of them).

The issue I mainly read about in other reviews is the large crowds that have been coming trying to get a limited number of tables. I know that they “reopened” in summer 2020 with some of the tables blocked off to provide social distancing, but I do not know what the crowds are like now. They do have takeout, and you can place orders through some of the food delivery services.

I would recommend trying Clark Crew, even if you have to use non-traditional means to do so.