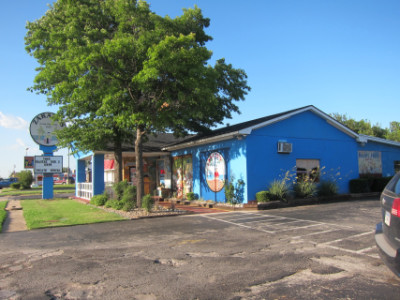 The cuisine at Zarate’s covers just about every country from Latin America, including South America, Mexico, and the Caribbean. Some countries are represented by one or two dishes, but the greatest variety is found for Mexican and Peruvian food. Flags of various countries are placed on the menu next to each dish to indicate its country of origin, and I thought it was quite interesting to have so many types of food available in one place.

The Peruvian dishes are from the owner’s homeland, so this seemed like a good bet for trying something “authentic” (or at least that the chefs had a lot of experience preparing). I suspect that dishes from many other countries were probably equally authentic, since food and recipes tend to migrate to nearby countries in Latin America just as they do from state to state in the U.S., and from Mexico to this country.

The Mexican items on the menu, by contrast, seemed to be the type of Tex-Mex dishes served in many Oklahoma and Texas restaurants, but which do not typically represent traditional style Mexican food. The Mexican food I tried was good (and was Tex-Mex style), but dishes from the other countries seemed more special because they are items that are not served in many restaurants.

The main choice for Peruvian dishes seemed to be between ceviche (made with fish or seafood) and the meat, seafood, or vegetable platters. Ceviche is generally considered the “national dish” of Peru, but takes about 20-25 minutes to prepare, according to the menu. 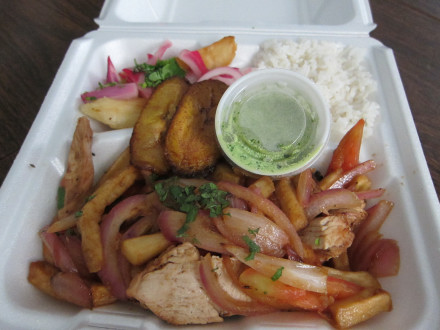 I think the dish I have enjoyed the most has been the Pollo Saltado, a flavorful roasted chicken that was not spicy, but was topped with vegetables and garnishes. I thought this was a very good introduction to South American food, provided one is hungry for meat (two vegetarian versions are also available: one with spinach and one with spinach and linguini). The saltado dish is also available with seafood or beef. The chicken was good, though, and I thought was one of the better versions of chicken I have had in the OKC area.

The Peruvian dishes come with side dishes that are typical of the country. Standard on each dish are fried plantains and yuca. Sliced tomatoes and onions provide added flavor. 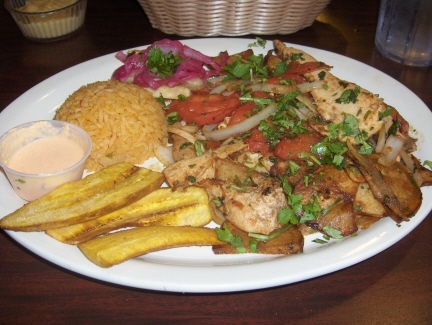 The former version of this dish came with yellow aji amarillo sauce and brown rice. The restaurant told me that the aji sauce is no longer available, but I think it would be a definite improvement if they brought it back. 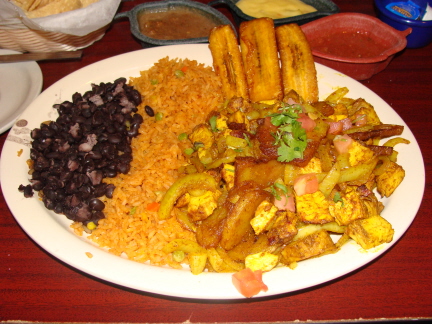 One that I wanted to try (and was recommended by the waiter) was Jamaican Curry Chicken, and I can assume this is one of Zarate’s specialties. This was sauteed chicken with potatoes, and a Caribbean style curry sauce. I cannot judge how authentic it was, but it was good. However, I did not think it was quite as spectacular as I have heard that some Jamaican dishes can be. 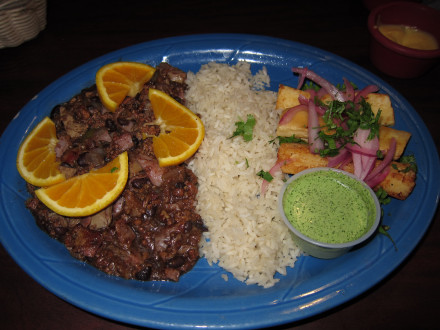 Zarate’s also offers Feijoada, the “national dish” from Brazil made of black beans with ham, ground pork, and pulled pork. I thought this had a good flavor but certainly not a vibrant flavor, and did not seem to match the type of Brazilian food I have had at Cafe do Brasil in downtown Oklahoma City. Still, it left me wanting to try more of the different national dishes from Central and South American offered at Zarate’s.

Mexican Food
Chips and salsa come with every meal (at least on the dinners), and I thought they were good. The special spicy salsa I once got on request, though, was even better. The Rice was quite surprising, with a tomato flavor that reminded me of the good versions served in El Paso (it was surprising because I usually do not find this in Oklahoma).

A Chile Relleno I sampled was also quite good, although since I judge all of these chiles by the ones in New Mexico I only gave it four stars out of five.

Some Other Notes
Zarate’s has a lunch menu that comes at substantially reduced prices, but the tradeoff is that not all dishes are available (including the pollo saltado). I cannot speak for the other dinners, but I thought the pollo saltado was very good, and probably provided a better value than many of the lunches even though you have to pay more for it.

Zarate’s has several Peruvian dishes, but it is not a Peruvian restaurant. It does not serve chicha morada, and no longer has aji sauce. The menu is mostly Mexican and a variety of “national dishes” from various Latin American countries. Still, I have found the pollo saltado to be better than at some of the full fledged Peruvian restaurants I have tried, and I would probably say Zarate’s is the best Peruvian restaurant in town (in fact I would definitely say this, but it is subject to making other discoveries at the other restaurants).