In a particularly insightful Peanuts comic strip, Lucy is sitting in her psychiatrist booth waiting for the other kids to seek her advice.  Depressed as always, Charlie Brown approached and deposited his five cents for a consultation.  Sizing up the situation, Lucy said to him, “You know, Charlie Brown, the problem with you is you.”  Charlie, being even more depressed by this, said, “Well, then, what do I do about it?”  Lucy, always having an appropriate response, said, “I don’t pretend to have the solution–I merely point out the problem.”

When doing restaurant reviews and food writing I often feel that it is good enough to merely point out the problem.  It may sound more credible if I can explain why some restaurants are better than others, but sometimes all I really know is what kind of experience I had at each place.  In fact, all I really promise the reader is that I will try to be objective and to be honest about both the good points and the problems that exist.

I do think there is a problem with Tex-Mex restaurants, which were a major contributor to my love of ethnic foods growing up but which I now mostly avoid.  Yes, my tastes have changed, but the question in this article is whether the restaurants have changed.  I believe this is the case.

Growing up our family had frequent meals at El Charrito in Oklahoma City, and as far as I know this is considered by many as being the “gold standard” of Tex-Mex food in the city.  (Retro Metro OKC has a good discussion on El Charrito).

Some restaurants in Oklahoma City are owned by former employees of El Charrito or use their recipes, and supposedly serve “food like El Charrito’s.”  So far, though, I have not found any other restaurants that taste anything like the food I remember at El Charrito.  Of course my memory may be faulty, but I suspect I am not alone in having these feelings.

One of my all time favorite restaurants was Karam’s in San Antonio.  I remember that the tortillas were soaked in sauce to give them a red color, and anything with cheese in it was a special treat.  (There was a restaurant in Yukon, OK in the 1980’s where Poquito de Mexico is now located that served the same style of Tex-Mex food).

I had the chance to eat at Karam’s in 2005 shortly before it closed.  At the time I was not trying to analyze or write articles about Tex-Mex cuisine–I merely wanted to enjoy a good Tex-Mex meal.  It was indeed as good as I had remembered in the past.  The only disappointment was how few other customers they had at the restaurant.

El Patio in Austin is another example of a long running restaurant that was very good on my most recent visit.

I do not have photos from these restaurants, but the enchilada from Los Arcos in Edmond, OK is the classic cheesy enchilada topped with chile con carne: 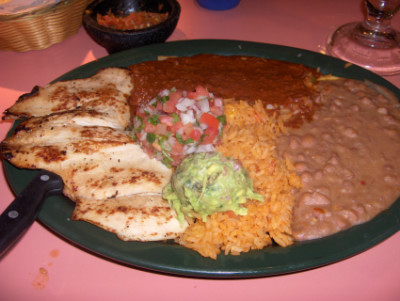 Enchilada (in back) on the tampiquena plate at Los Arcos, Edmond, OK

Los Arcos is a good example of restaurants that I find disappointing for their Tex-Mex food, but which are very good at their more modern (and more authentic Mexican) dishes.

My theory, after eating at Karam’s and some Austin restaurants, is that Tex-Mex can be as good now as it was when I was growing up.  It is just that most of it isn’t. I do not think I merely have fond memories of El Charrito–I think it really was as good as I remember.

Many restaurants today (in Texas, Oklahoma, and other states) are trying to do Tex-Mex food but are somehow missing the mark.  As to what to do about it, I don’t pretend to have the solution–I merely point out the problem.