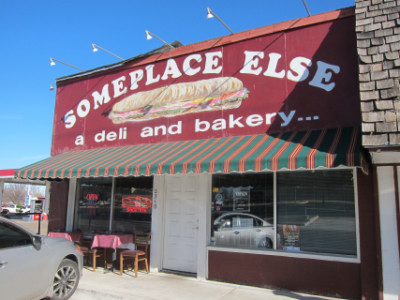 Someplace Else Deli is too well known, has reviews that are too good, and has been around for so long that it should not have taken me until 2019 to try it, but it did. The problem is that it is located in one of the foremost Asian Districts in the United States, and when I am in the area I am usually on the hunt for some excellent Asian food. My first visit to Someplace Else happened as part of a “crawl” with a friend where we split an Asian meal and then went to Someplace Else to do the same thing. I am glad I did it this way, and I found out that all the good reviews about Someplace Else are true.

Someplace Else actually predates the Asian District, and it was in operation before the first Vietnamese refugees settled in Oklahoma City, sparking the early development of what later became the Asian District. The age of Someplace Else is also the reason I like it. This is not one of fancy new sandwich shops where you make your own sandwich and choose from their exotic ingredients. Someplace Else has a menu, and they make each sandwich one way. You have the option of omitting any topping or ingredient, or adding them, but my experience is that the way Someplace Else makes a sandwich seems to be hard to improve upon.

They also have a very large bakery with mostly pastries and sweet goods (brownies, chocolate cookies, etc.). There are several good bakeries in town with similar items, but what distinguishes the ones here is that they are more affordable than others, yet I think just as good (based on my sample). 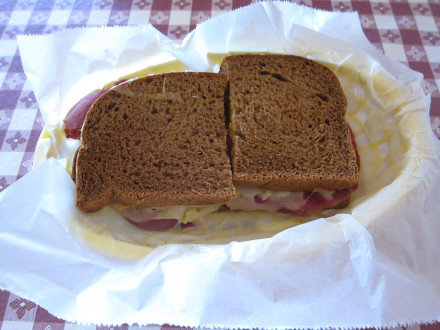 It is hard to see from the photo what is inside the Reuben but it was quite good, and was a combination that I would never have compiled on a “make your own” sandwich. This was because the key ingredient to it was the thousand island dressing which the person taking my order recommended, and for some reason I had enough trust in him to follow his suggestion. It was their house made dressing, so of course I should have known that it would be far better than the thousand island you would find in the average restaurant. The meat was corned beef, as would be expected, and it came with Swiss and sauerkraut. This combination works very well, and I think the reason is largely because of the thousand island.

I am now in a dilemma about whether to recommend Someplace Else or Ingrid’s for a Reuben sandwich. All I can say is that they are different, and they are both good. I like Ingrid’s for the sauerkraut. Someplace Else has sauerkraut on the sandwich, but not as much of it. Both sandwiches are good, and I would not argue with anyone who says it is better at one place than the other.

The Bakery
There is a large selection of pastries and goodies from the bakery. The brownies and chocolate cookies I tried were enough to convince me that this bakery can compete with anyone in town. It did seem to be less expensive than other bakeries, though, so this is a definite plus.

Other Information
Most of the meats for sale in the deli were the Dietz & Watson brand.

Someplace Else is open for breakfast, and has items such as sausage biscuits.

Parking in front of the store is very limited and is on the street.