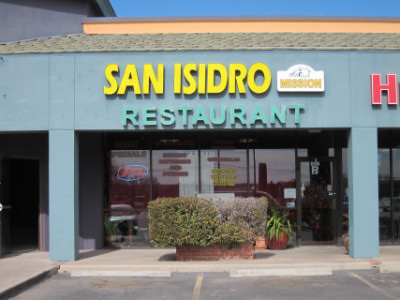 If San Isidro Mission Cafe were in any other city it would probably be my favorite Mexican restaurant, but in El Paso there is very stiff competition and I really cannot say that any one of them is my favorite (including this one). Instead I look at individual items and compare them one to another.

One advantage of San Isidro is that it serves two cities. It is located in El Paso’s Upper Valley on Country Club Road, but literally across the street is Sunland Park, New Mexico, a city with its own substantial population base. I have not been to San Isidro when it was not close to its capacity with customers, whether from Texas, New Mexico or other areas. 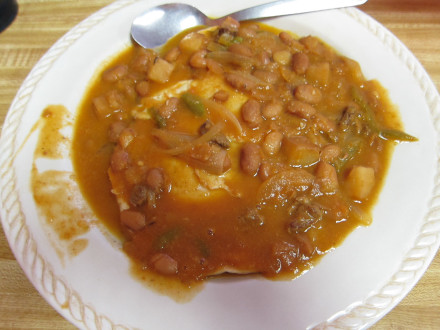 For breakfast I tried the Huevos Rancheros San Isidro, made with a special recipe of the owners (and different than the regular huevos rancheros which are also available on the menu). The version I tried had spicy green chile and a flavorful sauce. Although not very obvious from the photo, there are pieces of steak to give it additional substance and flavor.

While most huevos rancheros dishes in El Paso come with refried beans and hash browns, these come with whole beans and potato chunks (I think the other version of this dish on the menu is the more traditional one). The huevos rancheros San Isidro seems to be more of a New Mexico style dish (with the whole beans and green chile), so this is a good alternative if you are tired of the traditional versions served in El Paso. 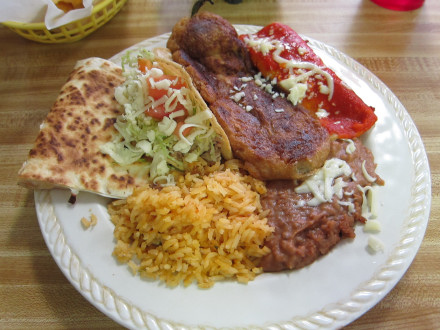 The combination plate gave me a good idea of what is available for lunch. I will say that I had two favorites from this plate, one being the Chile Relleno. Besides the flavor being good and having no sauce on top (New Mexico style), there were also relatively few seeds inside, and the ones that were there were near the stem.

The Quesadilla, although not one of my favorite items, was one that I judged to be very well prepared and with the flavor that it should have. I just prefer things with chile such as the enchiladas or relleno.

The Chicken Taco was better than one I had recently tried at Riviera, and therefore I have to proclaim the one at San Isidro as one of the best in west El Paso. In fact, only the taco and chile relleno were items that I thought were better than at most other restaurants. 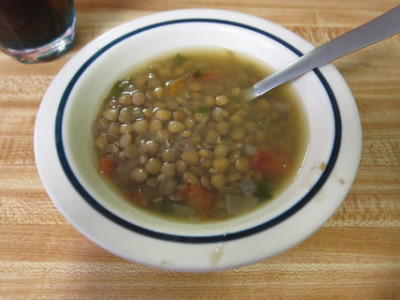 San Isidro serves traditional Lent meals which start out with a bowl of Lentejas, a vegetarian lentil soup. This one was very good although the cilantro was very noticeable. 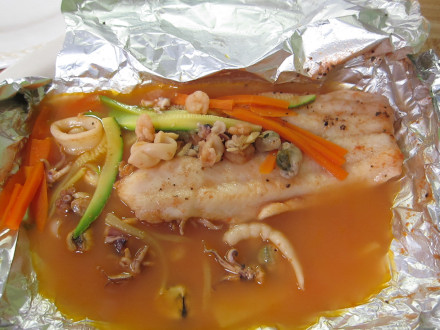 There was only one choice available for the main dish of the Lent meal, Pescado Marinero. This was a mixture of fish fillet, clams, squid, and vegetables baked in tin foil and providing a complete meal in itself. I thought the fish was very good, and this dish was definitely more upscale than the typical Lent special. 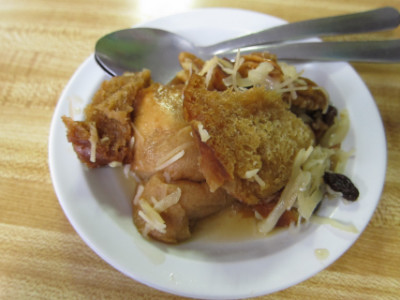 The special Lent meal also included Capirotada for dessert, a traditional bread pudding. The thing that was noticeable about this was its moistness (which I judge to be a good trait, and it certainly tasted good). 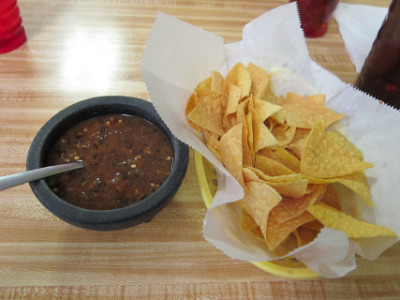 For chips and salsa I think San Isidro is in about the middle for El Paso restaurants, but still very good overall compared to most places in the United States.

Overall Comments
Much of the food here is similar to what is found in other El Paso restaurants. One difference, though, is that they have several special items that feature New Mexico style chile such as the huevos rancheros San Isidro. I think the red enchiladas are also good and are close to New Mexico style (although I thought the one at Riviera was better).

One very unique item here, though, is the pescado marinero served as a lent special. It is expensive (I think about $16) but to me it was a special treat.