Desi Bites is a chain of Indian restaurants in the Midwest which franchises the individual restaurants, with the one in Oklahoma City being known as Saffron Cuisine of India. Each restaurant follows the same menu which represents food from both northern and southern India, including the Indo-Chinese food of Kolkata.

The restaurants also insist that nothing is ever frozen, and that they use locally sourced ingredients. This and other factors combine to produce some of the best Indian food I have ever had. I also liked the fact that they gave me the spice levels I requested, so that an otherwise good dish was not spoiled by having a spice level that was out of balance. A note on this is that some Yelp reviewers suggested that it was best to get the mild or medium spice level, and mine was medium (which really was my idea of medium).

I also used the Yelp recommendations as a basis for choosing the dishes to oeder. I felt that these dishes were quite good, although I do wonder somewhat whether the non-recommended dishes would also be ones that I thought were very good (I really suspect that they would be).

My initial order was a delivery, and I found that the food arrived hot and very fresh. So far I think Saffron is in the top tier of Indian restaurants in the city. 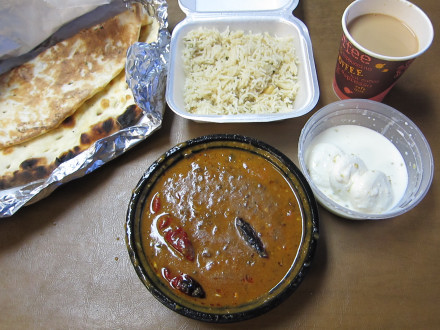 The Dal Makani is one of the vegetable curry dishes, and comes from the Punjab region of north India. Although I am generally not a huge fan of northern Indian cuisine, this is a dish that has consistently been one of my favorites (channa masala is my other northern favorite at most restaurants). This was definitely one of the better versions of dal makani I have tried (and I think I would say it was my favorite). This is a lentil stew that was made better than most by the seasoning they used, as well as the freshness, temperature, and spice level.

The dinner comes with a type of wild rice that I had not previously seen at Indian restaurants. I ordered Butter Naan extra, and would definitely recommend this (although some reviewers on Yelp mentioned that they really like the garlic naan). The naan came in a very large serving and had more flavor than I usually find in this side dish. 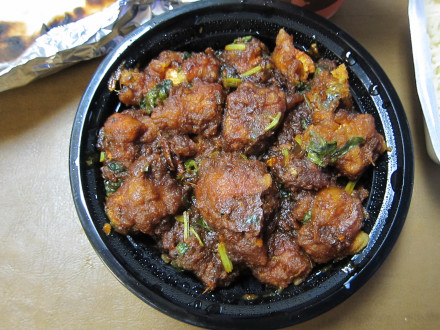 The Ginger Paneer is another dish that was recommended by Yelp reviewers, and it also turned out to be a winner. The Desi Bites web site says that Indo-Chinese food is popular in Kolkata (formerly known as Calcutta). I have had Indo-Chinese food in a few Indian restaurants, and one common denominator in all of them is that it does not taste like real Chinese food. Some of it is very good Indian food because they have a different take on the vegetables, spices, etc. than is normally the case with Indian cuisine. Like Chinese food that has been imported to many countries, though, they make changes that the chefs think will be more palatable to local tastes.

The ginger paneer at Saffron follows this same pattern, but it was very different than most Indo-Chinese food I had previously experienced by having a very noticeable ginger taste as well as some other flavors characteristic of Chinese food. Paneer is definitely an Indian food, but it went well with the more Chinese flavors found in this dish. It had some Indian spices but the ginger and a somewhat noticeable sweetness made it very interesting and very good.

Although I ordered both this dish and the dal makhani at the medium spice level, this dish was the spicier of the two (although still in the medium range). 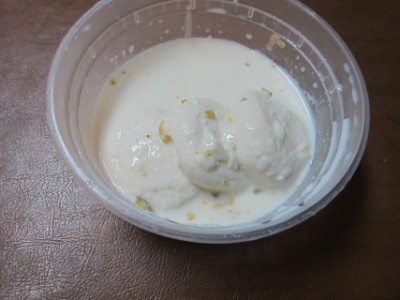 After ordering Rasmalai at Rasoi Chaat, I wanted to try it here for comparison. I liked both of them, and still think it is hard to go wrong with any Indian style dessert.

Drinks
The Hyderabadi Irani Chai was excellent although it came in a small size (the spices in it make a little bit go a long way).

Other Comments
The way I found out about this restaurant was from Yelp and from the restaurant forum on the OKC Talk web site, both of which gave it very good reviews. In both cases the reviewers seemed to know what they were talking about, and I am in line with their comments after trying it.

The prices are very good, and quantities are good. I wanted the naan and the chai, which did raise the price but not as much as at most other Indian restaurants.

The only thing I found that seems to be lacking is that they do not have thali (a sampler plate which so far in OKC I have only found at Rasoi Chaat). Also most restaurants in OKC do not give you an Indian style pickle relish with the food (but it is a standard component of thali). I did not miss the pickle with this food, though, since I found it sufficiently spicy as well as flavorful to stand on its own without any enhancements.

For me Naan Cuisine and Taj (which I used to frequent when it was on Northwest Expressway) are the two other Indian restaurants I have found that are comparable to Saffron in flavor and in the type and variety of dishes that are available. I do give a disclaimer, though, that I have not tried all the Indian restaurants in the city.