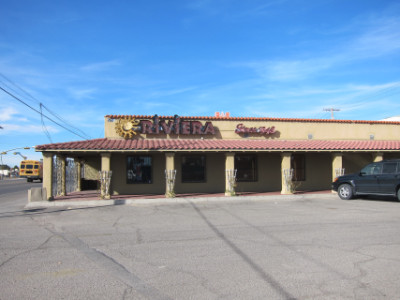 Riviera has been in operation since 1948, and when I came to El Paso it was one of the several restaurants (mostly located in the Upper Valley) specializing in New Mexican style food. Even though I have a hard time defining the differences between the local style of food in El Paso and New Mexican cuisine, it is evident by eating in some of El Paso’s popular restaurants versus the ones in Las Cruces. In the case of Riviera it was mainly the red enchiladas that caused me to classify it as New Mexican.

Riviera had a change in ownership sometime around the beginning of the 2000’s, and after that I noticed a change in the food. My main benchmark was the red enchiladas, which I almost always ordered here. In addition to having one of the city’s spiciest red chiles, they were characterized by a deep red color and a very straightforward chile flavor. In some other respects the food was very close to the style of El Paso cuisine, but with the red enchiladas I thought it was straight up New Mexican style.

The Riviera web site says it is now 65 years and a few generations since the Riviera began, but “our reputation for serving the finest in authentic Mexican cuisine still exists.” In describing the enchiladas it states that you can choose the Original Red, New Green (creamy), or Old Green (rajas de chile verde sautéed with onions and tomatoes). I am not sure if they are saying that the red enchiladas served now follow the original recipe, but I definitely think some things about it are different. I am not sure Riviera was ever a full blown New Mexican style restaurant, but the food served now seems to be totally consistent with the El Paso style of Mexican cuisine (although probably using chiles from New Mexico in its red and old style green enchiladas).

Today I do not find either the red or green enchiladas to be among the best in the city, but there is still plenty of good reason to come to Riviera. Some of my favorite items have been the chile relleno and the tacos, but there are many items I have not tried that may be very good as well. Sometimes the sum of the whole is greater than its parts, such as on the combination plates number 2 and 3, where you get tacos and a chile relleno along with enchiladas (all three of these together make a very flavorful meal).

Riviera is one of the city’s better Mexican restaurants in terms of not being greasy, not using cheap cuts of meat, etc. Guacamole is also a dead giveaway to tell which are the better restaurants, and Riviera serves a very good version of it.

One thing that has brought me to Riviera is the fact that they have lunch specials while many other restaurants have quietly made this go away (or else they never had lunch specials to begin with). Another good feature is that on one of El Paso’s notorious oven-like summer days, Riviera offers a cool respite where you can enjoy a leisurely meal (they have continuing service throughout the day, but it changes to the dinner menu at 3:00 p.m.). Sometimes shaded parking places are also available (at least the odds are better than at most other restaurants).

Riviera is open daily, is open late night, and serves food throughout the day. I believe it is open until 10 p.m., although at least on Sunday this apparently applies only to the cantina.

Riviera is open for breakfast every day and serves enchiladas montadas, chilaquiles, huevos rancheros, Mexican omelettes, etc. I have enjoyed the breakfasts, but I found many of the items to be expensive compared to other restaurants. 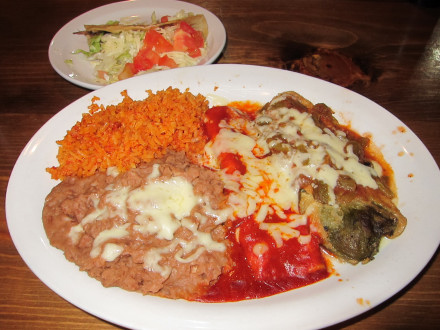 The dinner menu offers a wide variety of items, including the Dinner Combination Plate shown in the photo. Several items on the plate are noteworthy, including the Chile Relleno which I think is one of the best in town. This one was in fact very spicy, but it varies because not all of the ones I have had were this way.

The Red Enchilada was also very spicy on this night but I find it less so at lunch (and I do not have other recent experiences at dinner to compare with this one). This one had a very red color with a good flavor, and it was reminiscent of the “old” Riviera (but so far it is the only one that has been this way). They do have green enchiladas that look good in photos I have seen, but I have not tried them recently.

This plate includes a Shredded Beef Taco, while with lunch specials you get either ground beef or chicken. The shredded beef was my favorite, and in addition to being available on the dinner combination plates, are available on a taco plate or a la carte.

The Rice and beans are also excellent here, a key factor that I think puts Riviera in the category of the city’s better Mexican restaurants.

An item not shown in the photo is the tamal, which is available on one of the combination plates.

The restaurant seems to have a firm policy of not allowing substitutions (except as I have noted, the lunch combinations can come with either ground beef or chicken tacos). 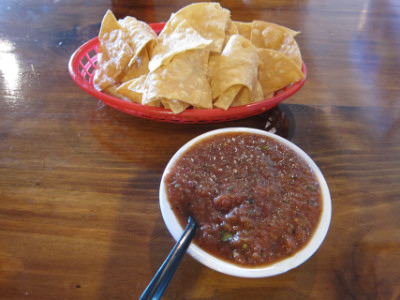 Chips and salsa are served with all meals, although on the combination dinner you may not want to eat all of the chips in order to have enough appetite for dinner. The salsa, like many of the items here, is one of the better ones in the city. 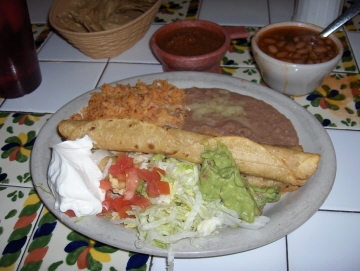 The Chicken Flauta is an a la carte item from the dinner menu, and is a less expensive alternative that may still be very filling (by the time you eat the rice, beans, salad, guacamole, etc.). The dinner plate has three of them (which I think might be overkill when you consider their size). I have not ordered the chicken taco plate, but I have had chicken tacos on the combination plate and on the old Taco Tuesday night. To me these are more flavorful than the flauta, but you would miss out on the guacamole and sour cream (which may make the flauta a better choice for many people). 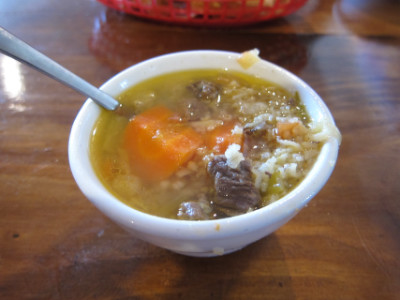 Recently they have been serving a complimentary Caldo (soup) with lunch plates, but I do not know if they come with dinners. The soup is not very large but it is nice to have some vegetables with the meal (it also contains chunks of beef). 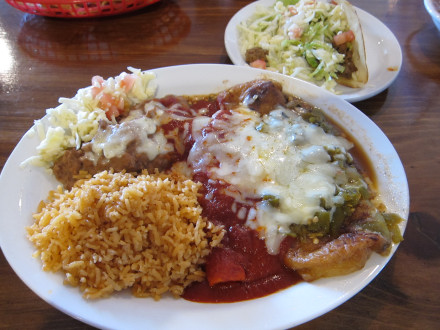 My go to choice at lunch is Combination B (if you see a letter instead of a number you know this is one of their lunch specials). These are mostly the same items served on the dinner Dinner Combination No. 2, except the taco has ground beef instead of shredded beef. To me this is a step down, but not a big concern because frankly the chile relleno is so good it really does not matter about anything else (although other items are very good as well). 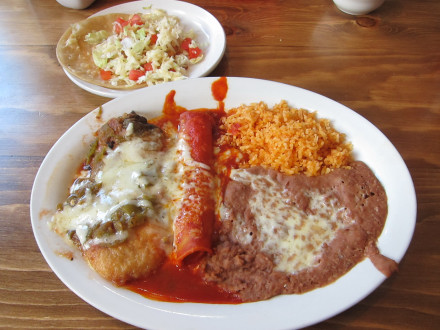 Lunch Combination B with chicken taco

This photo shows the same dinner with a chicken taco instead of the one with ground beef. For me this makes it a little better.

The problem I have had with lunch is that the red enchiladas have had a darker red color and a different flavor than I have experienced at dinner. I have been told that at 5 p.m. the dinner shift comes in with different cooks, and this may be the reason the food has been different (there are also other variables including time lapses between my visits to the restaurant). Normally I do not find the color difference to be significant except that at Riviera the bright red colored chile seems to be the best. 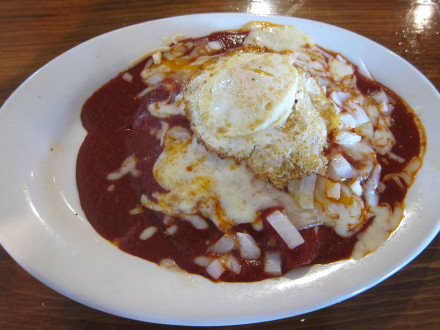 For those who want just the enchiladas, it is available as a plate on the lunch special menu. This is something I frequently ordered at the “old” restaurant but for the new one I only have a photo of it (this one has onions, while I usually prefer them without onions).

Overall Notes
The standout item here is the chile relleno, and there may be others but I have not tried everything on the menu.

My experience is that the enchiladas improve after 5:00 p.m. when the dinner shift comes in, but I have been unable to prove this over time due to having a limited number of visits to the restaurant.

The lunch specials have a good price compared to eating lunch at other restaurants, and my experience here is that if you get a combination plate with a chile relleno it is always a worthwhile experience.

The service has always been good, and I particularly like that they make suggestions that let me know about better items, substitutions I can make, etc.

When I went for lunch on a Monday they also had taco specials, which I think have replaced what they used to have on Taco Tuesdays.