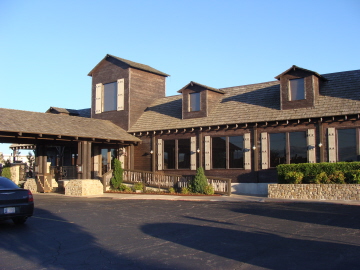 Growing up in Oklahoma I never realized that other parts of the country did not enjoy the same abundance of good quality steaks as here, but in recent years it has been much harder even in the Southwest to find the same kind of beef I remember as a youngster. I am not sure where along the supply chain much of the beef seems to have lost its flavor, but I have learned to distrust many of the claims made by restaurants that they serve a great steak.

Ranch Steakhouse on the north side of Oklahoma City, though, goes a long way in my quest to find steaks that live up to my expectation of the way I know they can be. I do not know if Ranch Steakhouse has the best steaks in Oklahoma, but I believe it is close. I cannot afford to go to all of the steak restaurants to find out which one is actually the best, but at Ranch Steakhouse I am pretty sure people will be satisfied that this is about as good as it gets. 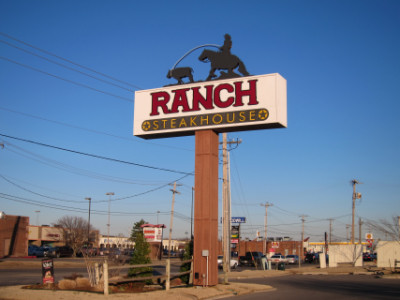 Even though Ranch Steakhouse is quite upscale, blue jeans are about as common here as they are at Cattlemen’s at the Stockyards. It is expensive, but I think people will consider it a bargain for the quality of meat served, especially when compared to upscale restaurants in large cities (although I say this without having much first hand experience with them).

Every evening you’ll find an extraordinary menu featuring 100% USDA Certified Prime tenderloins, strips, and ribeyes being skillfully prepared and cut by hand for each guest who dines with us. Our exceptional chef-driven cuisine consists entirely of custom aged hand cut Prime Beef from Nature Source that is never exposed to antibiotics or hormones and fed on grass up until just before being processed. We also offer a selection of Grade 12 Japanese Wagu Filets, 100% Grass Fed Filets and Dry Aged Ribeyes.

In ordering a filet the waiter informed me that there were three levels that could be ordered: the filet I ordered from the regular menu was about $50, the 100% grass fed filet was about $80 (this one is more tender), and the Japanese Wagyu was $30 per ounce (and is the most tender). The latter two are not listed on the menu, and the difference with the 100% grass fed meat is just the amount of time they are fed grass (the regular beef is grass until the time of processing).

The bottom line is that even the “regular” steaks are what I consider to be a special treat, and these are the ones I am saying are among the best in Oklahoma. I ordered the grass fed filet in 2010 when it was not as expensive as it is today, and I would say my enjoyment level of both types of steak was about the same.

Also in 2010 they were saying that their most expensive steak was “Kobe beef,” and I think they had to change this to “Wagu” because of the the term “Kobe” being a trademark for only certain beef which comes from Japan (and there were about a dozen restaurants in the entire United States that served genuine Kobe beef). I did not ask them on the last visit what they mean by “Japanese Wagu,” but I think this is the same steak they were selling earlier as “Kobe.”

For my taste Ranch Steakhouse is top quality, but there may be other levels of top quality available at a few restaurants in the country that are at a higher level then here. 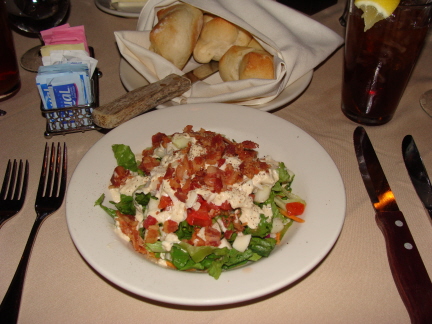 Even though I thought the steaks were top notch, I did not feel the same way about the Chop House Salad. This was a good salad, but it did not seem to me to reach the same level as the salads at Boulevard Steakhouse, Cheever’s, or a number of other good restaurants. The fact that it was topped with cheddar cheese was not a good sign to me, and I was underwhelmed enough by the other ingredients to think that maybe putting cheese on top was actually an improvement. Still, it was not bad, just a little below the level I would expect in a very good steak restaurant.

There are quite a few other choices for salads and appetizers, so I do not know if I would have a better opinion overall if I tried some of the other items.

Steak
Of course steak is the main reason to come to Ranch Steakhouse. All of the steaks are “Prime,” are grass fed until just before the time they are processed, and are hormone and antibiotic free. I believe being grass fed is the most important factor in the good flavor I find in the steaks here. 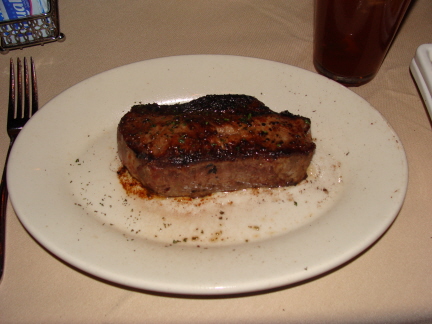 The menu has changed somewhat since an earlier visit I made in 2010. At this time the regular menu was not being advertised as being grass fed, but you could get grass fed beef at a higher cost. At this time I ordered a grass fed Strip at the higher cost. This cut, though, had extra fat and slightly different flavor that has since made me stick with the filet. 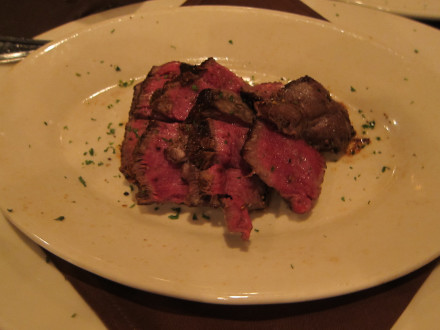 Tenderloin filet on a recent visit

My most recent order of a Filet was quite good, but was cut into bite-sized pieces which was quite surprising to me (but I think in a good way). I had eaten a filet on a previous visit, and this continues to be my first choice when coming here.

They now offer the filet at three different sizes (7 oz., 10 oz, or 16 oz.). The one pictured is ten ounces (which I shared, and both of us found it to be the right size).

Steaks are available with a choice of toppings for an extra charge, but with beef this good I am not sure it could be improved upon. 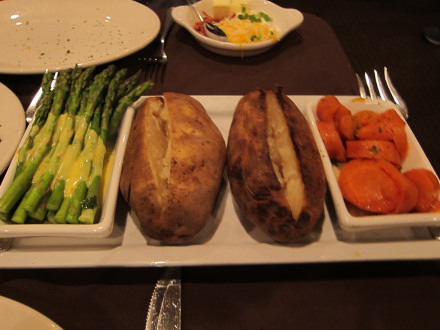 A Side Sampler of vegetables is available for $20 as of the time of this writing, consisting of two vegetables plus a baked potato. The choices of vegetables can be made from their list of about eleven items (I am not including the various types of potatoes). My plate had two baked potatoes because the waiter said the potatoes were small that evening, but normally you get one (also I think the waiter did us a favor because there were two of us). In any case, I cannot complain about what you get for your money.

I have not found all of the side dishes to be equally enjoyable, though. The two in the photo (asparagus and carrots) are among the best I have tried. Probably my first choice on any visit, though, would be the baked potato. It came with all the toppings I like, and the potato is always cooked the right way. 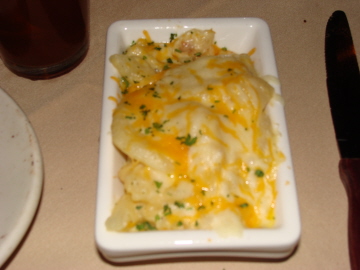 The Au Gratin Potatoes surprised me, though, by not matching what I consider to be the overall quality of the restaurant (although I felt the same way about the chop house salad). I thought the potatoes had too much garlic, too much cheese in relation to the other ingredients, and potatoes that were not crispy enough with a texture I did not enjoy (other than that it was good, of course).

My choice of broccoli and carrots was on the suggestion of the waiter, and I might advise this tactic when coming here for the first time or when not knowing what you would like from the vegetable menu. 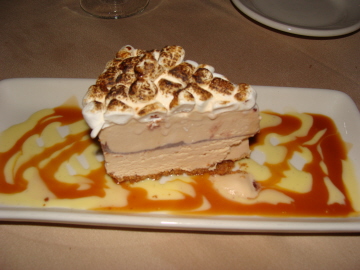 One feature that does seem to be as good as the steaks, though, is the desserts. The Dulce de Leche Cake I tried was one of the best after dinner treats I have had in Oklahoma City. I also understood from the waiter that this is the only dessert Ranch Steakhouse makes in house, so this may be the only one about which I would have such a high opinion. This particular dessert, though, was well worth the money.

Other Comments
After several visits I have concluded that Ranch Steakhouse probably has the best steaks I have tried in Oklahoma City (or in the case of Red Prime, which also has excellent steaks, Ranch Steakhouse seems to be less expensive). The problem, though, is that many of the side dishes at Ranch Steakhouse do not match up to the steaks. Ranch Steakhouse is my personal choice for “best steak,” but for a whole meal experience, including salad and side dishes, other restaurants such as Boulevard Steakhouse or Red Prime might be a better choice.

Ranch Steakhouse is located in north Oklahoma City away from the popular tourist areas (but just down the street from the popular “restaurant strip” on Lake Hefner), so it does not seem to be on the tourist radar for out of town visitors. I think, though, that it offers an excellent taste of Oklahoma steak. It is certainly popular with locals, and it usually seems that even when I go on weekdays, I end up getting one of the few tables available. I think there is good reason the locals make regular visits when they want a fine dining experience.

I think reservations would be a good idea on weekends, but so far I have done fine by going and taking my chances (all of these visits were on weekdays).

They have valet parking here, but for me this would not be something I would want to consider since the entire parking lot seems like a short walk to me.