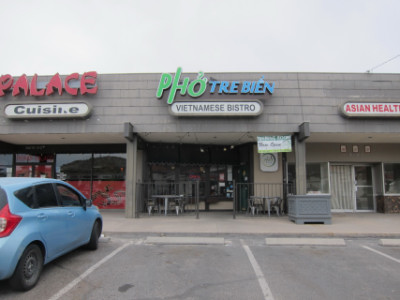 Pho Tre Bien Bistro on the west side

The flagship Pho Tre Bien on Gateway East (originally on Viscount Blvd.) was the first Vietnamese restaurant I can remember in El Paso. Unlike some ethnic restaurants that have opened in this border market where Mexican food is king, the food at Pho Tre Bien has been widely accepted because of its authenticity and not because the restaurant tried to change the food to meet local expectations.

There are now five Pho Tre Bien restaurants in the city, with the one on the west side being the “Bistro” (others are the Cafe, Express, and Noodle Bar). The stereotype about West El Paso is that the people are rich and they do not mind paying more (the gas stations have certainly adopted this philosophy). I have almost always found “Bistro” restaurants to be high priced, but in this case I do not think it is necessarily true. There are on-line menus for all of the Pho Tre Bien restaurants and the Bistro does not seem to be more expensive than the others, but it does have an extensive and interesting menu–possibly only surpassed by the original Pho Tre Bien.

So far I have not found any Vietnamese restaurant in El Paso that is better all around than the others. Instead, it seems to be a case where each has its own strengths and weaknesses. None of the weaknesses seem to be major (at least I have not found any). My biggest problems with Vietnamese restaurants in general is with ones that use too much MSG, but in El Paso I have had good results at all of them by requesting food without MSG (or in some cases by ordering the food the way it normally comes).

Pho Tre Bien Bistro is much smaller than the original Pho Tre Bien but has a menu that is almost as extensive. I have only been here in off hours such as the middle of the afternoon, and the service was fine, but I think there might be a wait for tables during the peak periods. 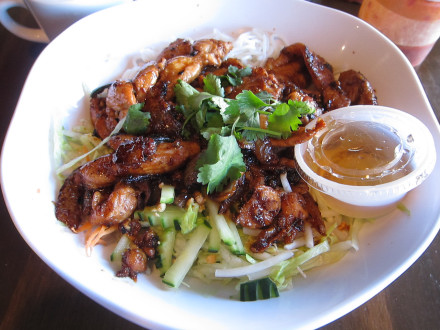 One feature I like about the restaurant is the fact that they have Vermicelli with Lemongrass Chicken (they also have beef with lemongrass and several other types of vermicelli dishes). These dishes can be ordered without MSG, and I have never had any problems when using this procedure. 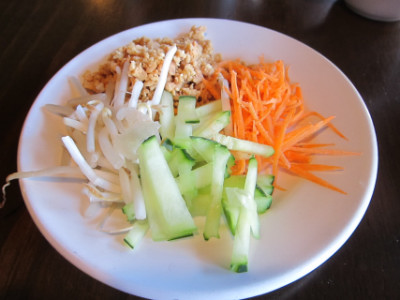 Vegetables served with the vermicelli bowls

The vegetables and peanuts come on a side dish so you can add what you want. The restaurant provides chile sauce so you can add as much spice to it as you desire.

The fish sauce (in the container in the top photo) is like most of the ones I have found–good flavor but not the “authentic” version I have had in the Oklahoma City Asian District. I am fine with the “mild” version they have here and at almost every other Vietnamese restaurant. 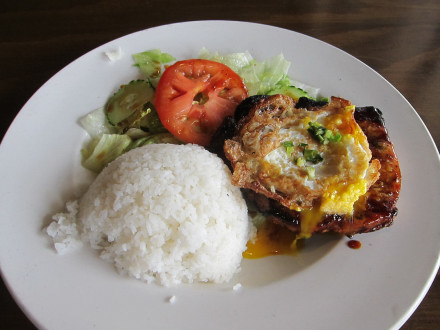 I consider the Pork Chop and Egg to be one of the best dishes at any restaurant in El Paso, and the thing I do not understand is how it can be as inexpensive as it is. The meat is probably not what I would call a premium cut, but.the marinade sauce and vegetables had such a good flavor combination along with the meat that I highly recommend this dish. (I think it would be just as good without the egg but I am certainly going to take it as long as this is the traditional way it is prepared).

The rice provides a good way to soak up any extra sauce left on the plate, and helps to ensure that no one goes away hungry. 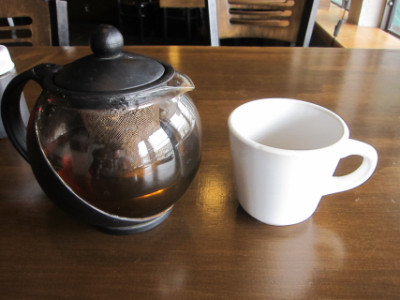 This restaurant has excellent Jasmine Tea that is brewed with loose leaves, and the price is very good as well. 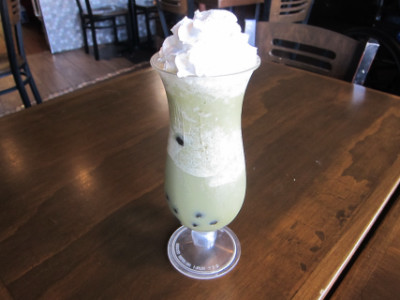 I ordered the Matcha Tea on an occasion when they did not have jasmine. This is a good choice, although more expensive than the jasmine and I think it does not go as well with the food that I usually order. Several other flavors are also available.

An Assessment
Although I have only come here a few times, I have many years of experience with the original Pho Tre Bien. There are quite a few items I know are good, and I have quite a bit of confidence that it will be the same at Pho Tre Bien Bistro.

The contrast is quite striking between the original Pho Tre Bien with a large dining room and outdoor patio and the Bistro which only has a few tables, but at least I know that the food seems to be just as good.

To me the big issue for west side El Paso residents is whether this restaurant or Saigon Taste has better Vietnamese food. At Pho Tre Bien Bistro I have only tried a few items but I have liked them better than at Saigon Taste. At the same time, though, there a quite a few items at Saigon Taste that I really like, and for most of them I have not tried Pho Tre Bien’s version in order to make a comparison.

I will say, though, that the jasmine tea at Pho Tre Bien Bistro is a large factor as to why I like this restaurant better (although out of only a few times I have gone there has already been one that the tea was not available).

On the subject of MSG, both Pho Tre Bien Bistro and Saigon Taste have been using it at low levels so that it does not seem to be a major factor at either restaurant.