Note: This is a review for Olde Orchard when it was located in Bethany, OK. The restaurant moved to Yukon, OK in Nov. 2020. 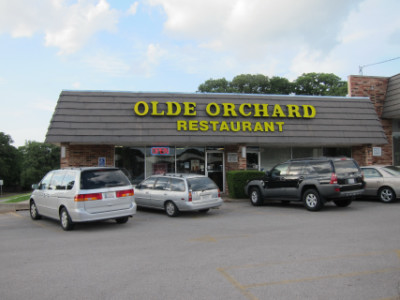 The “Old” Olde Orchard in Bethany

Olde Orchard Restaurant is one of those places that I have seen for years and always wondered whether it was worth trying until the age of the Internet and the proliferation of restaurant reviews. This is just one more to reassure people that, yes, Olde Orchard is worth stopping in for a meal. The food here is American style comfort food, and I think it is very close to home cooking.

Now that I know how good Olde Orchard is, I am disappointed that several things are not on the menu that I would like to be included. This is a family run restaurant that has enough employees and family members to keep it open for breakfast, lunch, and dinner. I think the menu is limited on purpose, so that everything served will be fresh. There are daily specials which do provide a little more variety. I can live with the selection not being huge because I like what they have, and they are always open when I want to go. 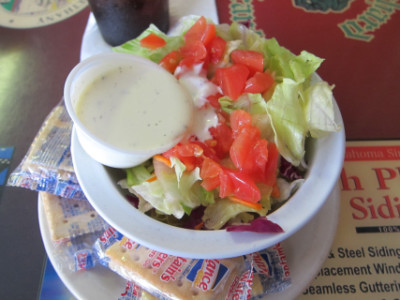 The Salad comes with some meals, and is probably not something I would have ordered if it cost extra based on my experiences at quite a few American restaurants. The iceberg lettuce on this salad was fresh but the quality of it was not really anything special. The house made ranch dressing, though, was really something special (even when compared to some fine dining restaurants). This was a little bit like the salad at Papa Dio’s– it was not the lettuce that made it special but it was everything else (also notice in the photo that the tomatoes are actually red). 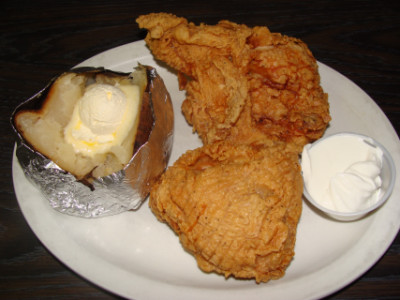 The Fried Chicken tasted home made, and like the famous chicken at Eischen’s the dark meat was the best part. This was an excellent fried chicken, and it joins three or four other places around the metro that I think also have excellent chicken. The pieces were large, and contradicted my normal belief that smaller chickens taste better (such as the ones served at Eischen’s). I found the small order to be quite sufficient for a meal. One good thing about Olde Orchard is that you can choose white meat, dark meat, or both.

The baked potato was also very good, and tasted as if it were actually baked.

No other vegetables came with the plate, but it did have the aforementioned salad. 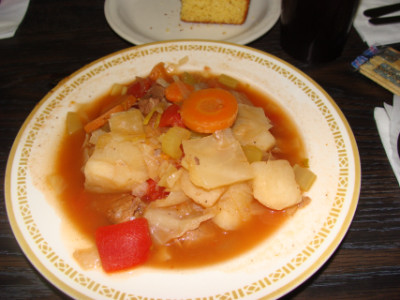 I sampled a little bit of the Stew, and this was very flavorful but maybe with a little bit too much pepper. Overall, though, I probably would have liked this meal better than the chicken because of the vegetables that were in it. The broth was also very good quality, as was the corn bread. 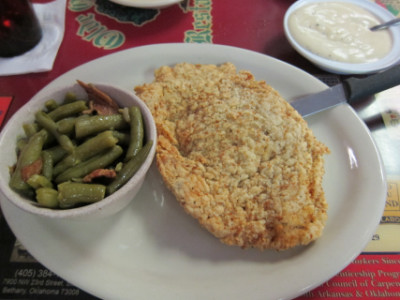 The Breaded Pork Loin is an excellent alternative to several chicken fried steaks found in various restaurants around town (Olde Orchard has chicken fried steak as well, and I would bet it is as good as the pork loin). The crust at Olde Orchard was especially flavorful, the gravy was thick and rich, and I thought the meat was top quality. To me, the pork loin here is “country cooking” at its finest (and by the way, the fried crust and gravy are both optional). 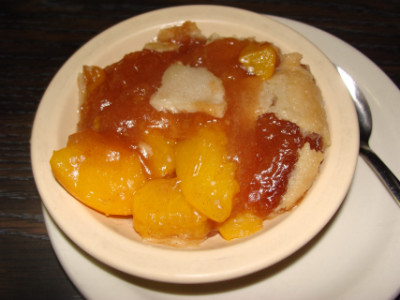 I had heard that the desserts were not to be missed, and I have ordered several including some for take home. The Peach Cobbler turned out to be one of the best I tried, and fortunately was not ruined by being too sweet. I think the peaches were from a can, but the crust, filling, and everything was delicious. 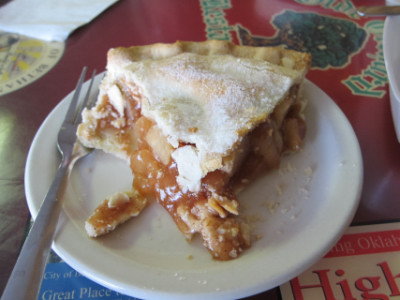 The Dutch Apple Pie is probably my favorite of the pies, and was done very well.

Some of My Other Favorites 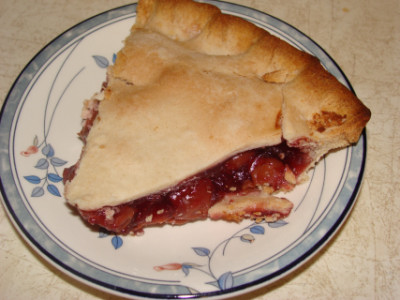 The Cherry Pie was very good, and had the classic flavor I expected. 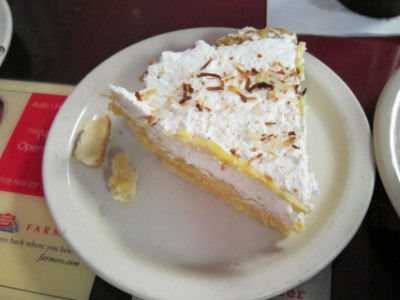 The Coconut Cream Pie is another good choice, and did not disappoint.

The Peach Pie was very much like the cobbler– excellent if you don’t mind the fact that the peaches are probably from a can.

The Chocolate Pie here was much like the ones at other restaurants– not my favorite but enjoyable. 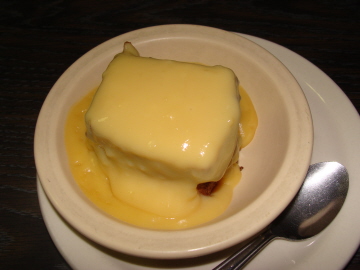 The Bread Pudding was a little bit disappointing compared to the one at Cajun King, but it had a good flavor (I would say, though, that this is my least favorite of the desserts I have tried at Olde Orchard).

Additional Observations and Tips
Olde Orchard fits the classic definition of a hidden gem, and is doing its part to bring back the ideal of what an American restaurant should be.

There are some interesting daily specials, such as chicken pot pie available on Thursday, but these are for lunch only.

They have chicken fried steak, but I have never ordered it because I like the breaded pork loin so much.  You can get the pork loin or the CFS without breading, and I do feel that this might be worth a try because the meat is the best part (and at times I have been disappointed in the breading).

Even though I gave the salad four stars, I really like it (especially the ranch dressing).  It is just that it is not a five-star salad.

The desserts are home made and are not too sweet, so this is why I think they are such an important part of what the restaurant has to offer.

They have some Mexican food, especially as dinner specials, but I have not tried it.

The “healthy” food here (such as the stew) tastes fresh and flavorful, and offers a very welcome change from the way most diners and American restaurants do it.