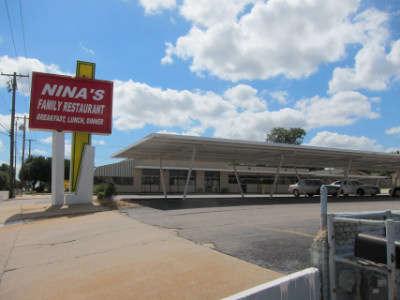 The old Coit’s Root Beer Stand at Northwest 50th and Portland in Oklahoma City has found a new tenant, Nina’s Family Restaurant. Nina’s does not have the carhops, root beef floats, or some of the other features that made Coit’s famous, but it is bound to create its own following.

In the Southwest the line has become somewhat blurred between Mexican and American food, and in this sense Nina’s is “Southwest.” It does not serve Southwest cuisine such as green chile cheeseburgers or other fusion type dishes, but diners do have a choice between American or Mexican food (I think the menu leans more toward the American dishes, though). The breakfast pictured in the photo shows how this fusion idea works. The Spanish Omelet was Mexican style with salsa and cheese on top, although I think the idea of an omelette itself is an import to Mexico from the United States (I did not see huevos rancheros or other Mexican style dishes on the menu). The omelette was flavorful and I recommend it, but I just want readers to know that there are not any alternatives to the Spanish omelet if you want a Mexican style breakfast.

The omelette comes with a choice of side items, so I chose the Home Fries. These came with bell pepper and onion (which the waitress suggested they could add), and I thought this was a good touch. Overall this was a very satisfying meal. 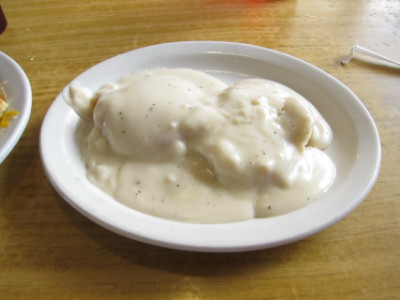 Although my meal was huge, my dining companion was having an even harder time finishing the meal, so I ended up sharing some Biscuits and Gravy. This was an alternative choice to the home fries (all breakfast plates come with a choice of either of these items, grits, or toast). To me the biscuits and gravy were stellar, reminding me of the ones I used to get in central Texas.

Lunch and Dinner
For lunch or dinner there are several Mexican choices, although there does not seem to be the opportunity for a “crossover” of a Mexican main course with American sides (at least from the menu). I think if you really want this, though, they can do it. Since I tried the salsa on the omelette, I at least know that this salsa would be very good on the dinners.

Additional Comments
The cost is really in the $$ category by the time you order a drink, but it is so much lower than other places that I have designated it as $.