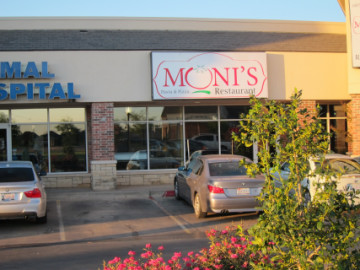 Sometimes I get ideas for trying new restaurants from web sites with reader reviews, as was the case which led me to Moni’s. This restaurant had such an overwhelming positive comments that I could not help but take notice.

Moni’s is located in what I consider as somewhat of a “no man’s land” in what many web sites call “Edmond,” but which is actually in the Oklahoma City limits. It is in a new strip mall on North May Avenue north of Quail Springs Mall, and I know from experience that it is somewhat hard to find even if you are looking for it.

As far as my reaction to the food from my first visit, I would say that it is in the upper category of Italian restaurants. There were some items I liked very much, but not as many as I expected from the reviews I saw. On the other hand, some of the things that I kind of gloss over at other restaurants waiting for the “good stuff” turned out to be some of the “good stuff” at Moni’s. This included the bread, the salad, and the spaghetti (actually I thought the salad dressing was outstanding).

My second experience with Moni’s was prompted by the statement that they have New Jersey style pizza. Although I had the Mama Mia pizza on the first visit, my follow up order of the Bada Bing reinforced the impression that this was very good pizza. I haven’t quite figured out what is the difference between New Jersey and New York style pizza, but they seem very similar–both have a soft crust and an ample amount of cheese, sauce, and toppings. I must point out, though, that my sampling of both styles has come from restaurants in Oklahoma City. 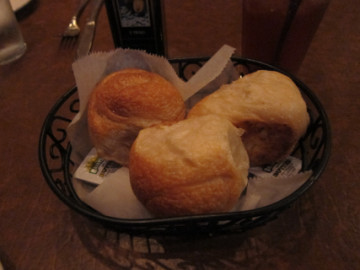 The Bread was fresh, flavorful, and was some of the best I have had anywhere. I purposely left some of the bread sitting there so that I could take it home and enjoy it later. Because of the lighting conditions in the restaurant the bread in the photo does not look as good as it actually was, but it is the taste that matters. 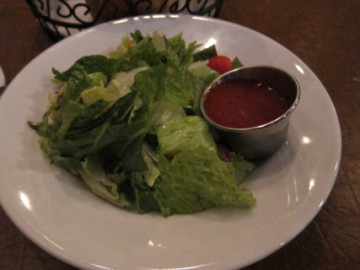 The Salad was surprisingly good, and I say this because I normally have low expectations at Oklahoma City Italian restaurants. I could not quite give a five star rating to the salad itself, but the raspberry vinaigrette dressing was one of the best I have had anywhere. I have read that the dressing is home made, and I believe this to be true. I really had no complaints whatsoever about the salad.

The Stracciatella Romano was described to me as an Italian egg drop soup. It was really a surprising experience not only because it was a totally new dish to me, but also because it turned out to be so good. This was a very flavorful blend of vegetables, broth, and egg that seemed to get away from American style Italian food and more toward the rich flavors I have experienced in some of the more authentic restaurants. I would say that this soup is one of the better things people can try in the way of Oklahoma City Italian food. 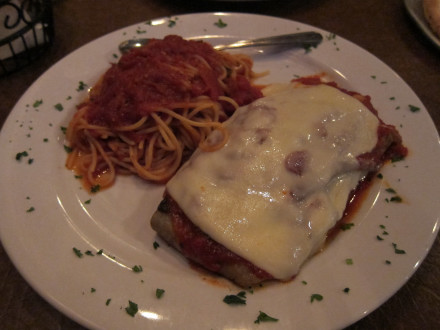 The Eggplant Parmigiana was a dish I liked quite a bit, but I did not see it as being really special compared to restaurants such as Papa Dio’s or Vito’s. My favorite eggplant dishes are those in which the flavor of the eggplant is well disguised, and perhaps this one did not quite go far enough (but others may like it the way Moni’s does it).

I will have to say, though, that the spaghetti served on the side was quite special compared to most others, and in fact was just about my favorite part of the meal. I could definitely see myself returning to Moni’s just to order spaghetti or another pasta dish (thus I suppose the name “Moni’s Pasta & Pizza” is quite appropriate). 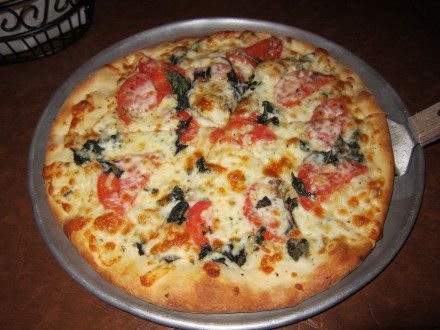 The other part of the name, pizza, or more specifically Mama Mia pizza, was another highlight of my first meal at Moni’s. Actually my main disappointment with the basil and tomato pizza was that it did not have sauce, although the waitress said I could have ordered it with sauce (I will definitely consider this in the future). Otherwise, though, the toppings were very good, and overall it was one of the better pizzas I have found in the city. 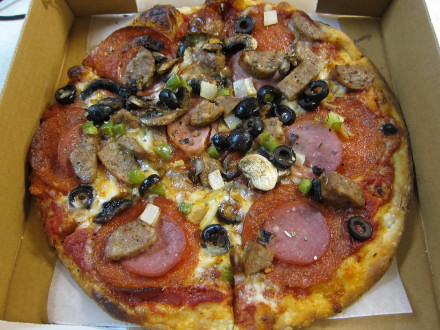 The Bada Bing pizza which I ordered in 2021 was a little bit more impressive than my experience with the Mama Mia. For one thing it had sauce (which was quite good). The most surprising part of it was the toppings. The Italian sausage, pepperoni, and Canadian bacon were very thick so that they were not only very substantial but the flavors were very evident. I suspect that some restaurants give you very thin slices not only to save money but also so that it would not be obvious if they were not completely fresh. Sadly it is most restaurants in OKC that serve very thin toppings (although not necessarily because they are not fresh).

Bada Bing had a good balance between the meat and the vegetables (consisting of green peppers, black olives, and mushrooms). If it sounds as if I am giving a strong recommendation for this pizza that is because I am.

Other Comments
I think Moni’s is very strong in both the pizza and pasta categories. The appetizers and side dishes, though, are where I think it has a surprising strength.

I have listed some dishes I liked quite a lot and others that I was less enthusiastic about, and this is something I find in almost all Italian restaurants once I have a chance to try a number of items. Overall, though, I place Moni’s in the top tier of the city’s Italian eateries.

The restaurant is in the $$$ category if you order extras such as the appetizers I tried. It is partly because of these items, though, that I think the restaurant is so good. My opinion is that people will likely spend more money here than at other Italian restaurants, but that it will be a very enjoyable meal.