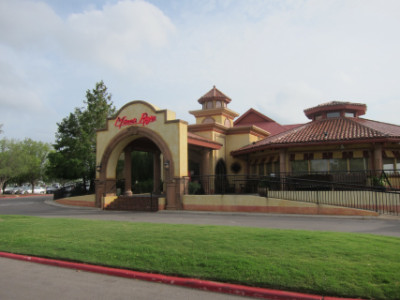 Mama Roja is one of several restaurants located on the eastern shore of Lake Hefner that are popular because of their views, the fact that all of them have bars, and the fact that both patio and indoor dining afford some of the best sunset views in the city. Of course the quality and variety of food offered from the various restaurants is a major factor that draws crowds here.

I had read that when this group of lakeside restaurants was in its development stage they were considering the possibility of including a Rick Bayless style Mexican restaurant (either with Rick as the owner or as a consultant about how to prepare the food). This never came to fruition, but Mama Roja was built as the Mexican food option in a group of mostly American and seafood restaurants.

When I first visited Maja Roja in 2011 I had not heard the story about Rick Bayless possibly being involved in the Mexican restaurant here, and frankly I could not imagine anything more dissimilar to Rick’s food than the Americanized tourist oriented food I found at this restaurant. By “Americanized” I mean that it generally lacked the spiciness and bold flavors that I have been used to eating in El Paso and the surrounding areas of Mexico and New Mexico. By “tourist oriented” I mean this as somewhat of a compliment because it included the quality of ingredients, cleanliness and ambience of the restaurant, etc. which helped make the general public feel comfortable here. However, it seemed to be far from either the cutting edge recipes or the authentic recipes for Mexican food that I think are both embodied in the food I see on Rick Bayless’ television programs (and which I someday hope to experience at his restaurants).

On a return visit in 2020, though, I experienced a somewhat dramatic difference in Mama Roja which seemed to be very much for the better. As usual, I need to give the disclaimer that perhaps I did not order the right thing before or that there may be other factors involved besides the presumption that Mama Roja has changed the food. In my somewhat random experiment of ordering different items from the menu, though, I was very pleased with the flavors and authenticity of the food. The quality of ingredients has always been here, but now I really like the way they prepare the recipes. 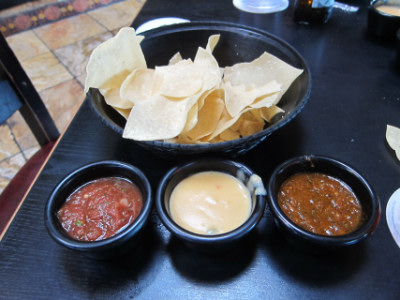 I thought the Cheese Sauce was a little weak compared to others in the city. The Smoked Salsa was very good, though, and I would have thoroughly enjoyed it except for the fact that I had a swallowing problem with the chips (something that happens to me frequently if the chips are more grocery store style than Mexican style). They brought the smoked salsa by request, and they have an even spicier habanero salsa available if you want it (I have tried it in the past and I think it is also very good). 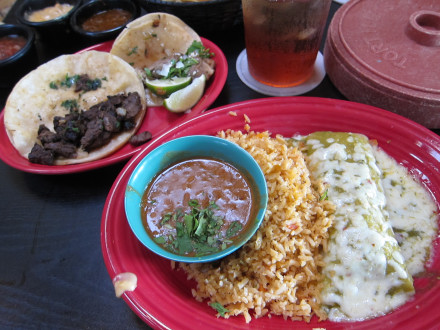 Fiesta plate with carne asada taco on the left, carnitas taco on the right, and ranchero chicken enchilada on the main plate

On my earlier visits my favorite item was something called Tijuana tacos (which are no longer on the menu). Knowing that tacos were probably a good bet, though, I ordered two kinds of tacos on the Fiesta Plate (where you pick three items from the menu on a combination plate).

I would have to say that the Carne Asada Taco was probably the better of the tacos because of the fact that the meat was seasoned to the point that I really enjoyed it without adding any sauce to it. The meat itself was excellent, and this was very reminiscent of the taco restaurants I have visited in Mexico and elsewhere that I particularly enjoyed. I probably would have enjoyed it more with additional garnishes such as cilantro and some sauce, but it was nice to know that you really do not need this to have a good taco.

The Carnitas Taco comes with a special sauce which made this an equally enjoyable taco. Carnitas is not one of my favorite meats but this one was good quality and not too “gamey” (I am not a carnitas expert but this is how some versions of carnitas seem to me).

The Ranchero Chicken Enchilada with green sauce was probably the most worthwhile item on the order. This is because it was about twice as much food as either of the tacos were, everything was good quality, and the green sauce gave it an excellent flavor. The green sauce was not especially spicy but it had a good flavor and was definitely not a wimpy sauce. Like the tacos I would say that the enchilada would be “El Paso approved” (although I really would not say that about the rice, beans, or chips). Still, though, to have the main items this good has really brought Mama Roja much higher in my estimation of the restaurant.

Previous Visits
Although I have made previous visits to the restaurant, the menu seems to have changed quite a bit so it is fitting to start with a fresh review on the Food Blog. I will say that I liked the Tijuana Tacos (which are no longer on the menu) and the Habanero Salsa (which I think is still available on request). I have notes that I tried the Flautas and the Mango Chicken Salad, but they must not have impressed me very much because I did not list them among my favorite items. I did note that the chips, rice, and beans were not up to par (as was the case on my most recent visit). For at least the rice, though, I think it may have improved somewhat from previous visits.

Other Observations
The outdoor patio with a view of the lake is a very popular feature of the restaurant, although for my taste the Oklahoma weather affords very few days when I would want to eat outdoors.

The dining room has good views of the lake and the sunsets over Lake Hefner, and to me dining indoors is usually the best choice. I visited the restaurant after the COVID measures were put in place and everything seemed to be very professional in the way they distance the customers and keep everything sanitary (not that they were not doing the same thing before, but I took special notice of the way it is now). The prices here are high, but they seemed to be just as high before. Now it seems like more of a bargain, though, compared to what you get at other restaurants for the same price.

My analysis of Mama Roja’s “changing the food for the better” is that it is mainly because of items they have added to the menu that have more of an authentic flavor than the predominantly Tex-Mex items they offered previously. I do not know if my analysis is entirely correct, but I do know that they have made some changes to the menu.

I am assigning a rating to this restaurant that normally would not be given to a restaurant where the rice, beans, chips, etc. are not really up to par, but the main items I tried were so good that it was really up to El Paso standards as far as I am concerned.