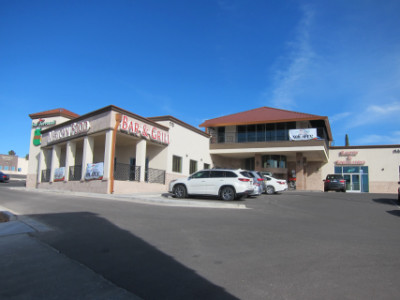 In 2019 Los Jarrones moved from its long time location at 120 E. Redd Road to a new restaurant at 170 E. Redd Rd (just up the hill and around the curve of the street). In my opinion Los Jarrones serves high quality, authentic Mexican food at reasonable prices (of course these are subject to interpretation, but I have tried quite a few Mexican restaurants in the border area).

As of this writing I have not eaten at the new location, so I will not comment about the atmosphere or the service, but only the food (which should be the same as it has been during the years that I went to the old restaurant).

Los Jarrones seems to be modeled after a Ciudad Juarez style family restaurant with as many items on the menu as they could manage. Breakfast plates are listed and a kid’s menu is available. Seafood is served, and they seem to have items that appeal to the taste of just about anyone. While only Mexican food is served, the restaurant begins to approach some of the Mexico City style restaurants with a wide variety of food including steaks, different types of soups, tortas, and non-spicy entrees that some may not necessarily think of as being Mexican.

I believe beer is served, but since I did not write it in my notes, I have not listed alcohol under the “restaurant details.” I tried to get aguas frescas drinks but could not. I ended up with Jarritos, a brand of Mexican soda, that I thought was good. 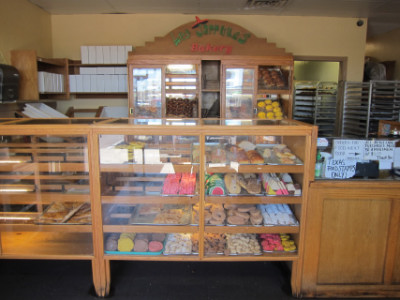 The bakery at the old location

A bakery is attached to the restaurant, and this is a good source for dessert or take-home treats. I have not been to all the Mexican bakeries on the west side, but the two I frequent are here and the Valley Super Market. Of these I think Los Jarrones is better overall, although I prefer the empanadas at Valley Super Market. 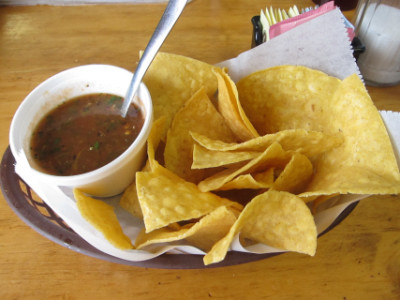 Both the chips and salsa have been standouts, with the salsa being puréed (not chunky) with a jalapeño flavor. 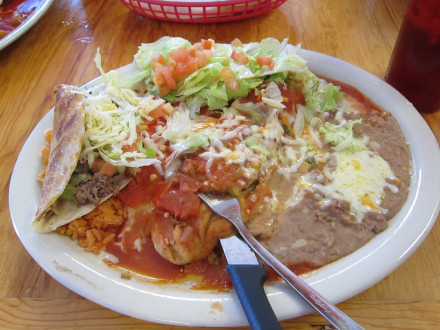 A good introduction to the food here is with the Mexican Plate, which includes some of the most popular items in Borderland restaurants.

The Chile Relleno in my opinion is the best item on the plate and possibly on the entire menu. They use an excellent asadero cheese inside and the chile is almost devoid of seeds (bonuses to the already high quality chile).

The Red Enchilada holds its own to the ones in other good restaurants, although I cannot say it is particularly remarkable. I should point out, though, that I think the red chile used is more typical of the local El Paso restaurants that the true Chihuahua style food, with the richness and spiciness that people in the area expect.

The Shredded Beef Taco was a little greasy but very good quality otherwise.

The Rice had a nice tomato flavor, and was about the closest to a home made flavor I have found in El Paso restaurants. The Beans were not greasy. 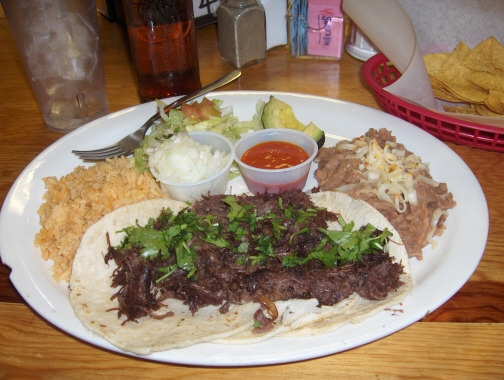 Tacos de Barbaoca can be quite flavorful when good, but quite dried up when not done properly. On the advice of the waiter I got an order, and when trying them I thought they were correctly listed as one of the “Los Jarrones Mexican Favorites.” These were moist and flavorful, making them better than the barbacoa at some restaurants at which it is supposed to be a specialty. This is not usually on my list of things to try at restaurants, so I do not have a wide universe from which to compare.

The menu gives patrons the choice on this dish and the tacos de bistec of baked potato and salad or rice and beans, but with my bad eyesight in the poor light I did not see the word “or,” and ended up with rice and beans. The waiter did not point out the fact that there was a choice, and when I pointed out that I was expecting a baked potato, the owner gave me one. It turned out to be one of the better baked potatoes I have had (so is the choice I recommend to those who are not set on having rice and beans). 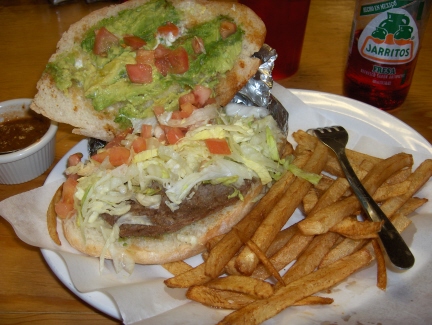 Tortas make a smaller meal than the dinner plates (but not a very much less expensive one), and several choices are available. I tried the Torta de Milanesa con Aguacate with a breaded beef cutlet and avocado. I have to refer back to the milanesa steaks at Lucy’s Restaurant as the standard I use, with the one at Los Jarrones in comparison being rather dry and less flavorful.

The French fries seemed greasy to me, and forgettable. 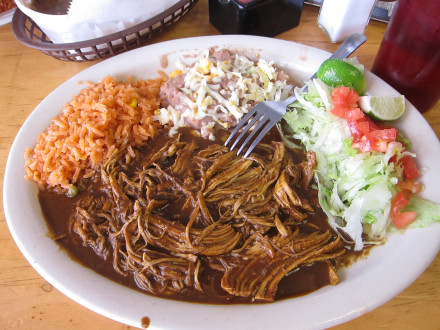 The Chicken and Mole plate was one of the best I have eaten, with some at other restaurants that were formerly my favorites being of lesser quality recently. I look for good quality, freshness, and flavor in the mole, and I found all of them here. The type of chicken used is not as big a concern to me, but I thought the chicken here was very good. I do not try mole at very many restaurants because it is so easy to be disappointed with this dish, but I am very glad I tried it here.

One of my friends says that the mole here is too sweet, something I really did not notice when I tried it but I will pass along this information to readers in case anyone is looking for mole that is less sweet. 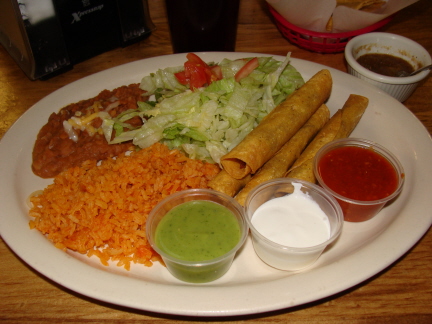 I thought the Flautas had very good beef, and the shells were not greasy. This is about all I ask in a flauta, although it would have been nice if the guacamole had been more flavorful.

Additional Notes
So far enough items have been a standout that I think this is a very good Chihuahua style restaurant. The lack of lemonade and other drinks prepared from scratch is a negative for saying this is a truly authentic restaurant, but ultimately I think the food is more important than the drinks.

With the exception of the chile relleno, the items on the Mexican plate did not impress me as much as at several other restaurants (enchilada, taco, etc). I would have to add rice to the list, though, of items that are better than at most other restaurants.

The list of “Los Jarrones Mexican Favorites” seems to be a good starting point for finding the items that the restaurant does best.