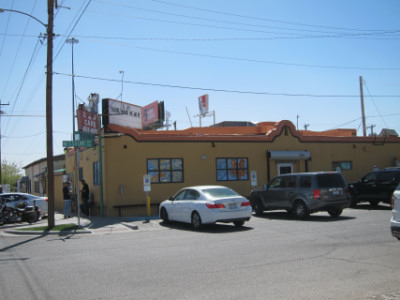 L&J Cafe is probably the most well known and the most popular Mexican restaurant in El Paso. The waiting line can get so long that you might need to develop a strategy for how to spend your time until a table becomes available. Of course this is after you have successfully mastered the strategy of finding a parking space (there is no parking lot–all available parking is on the street).

There was a time, though, when L & J did not have the popularity and name recognition that it does now. At times we had visitors to my office from out of town who wanted to find a good place to eat, and I was able to take them to this place across the street from the city’s largest cemetery that was only known by locals but which had food that people from out of town would really like to know about. Thanks to the Internet many out of town visitors are now among the ranks of people waiting in line to be able to eat here.

When my co-workers first introduced me to L&J there were about five tables and a number of bar stools that could fairly well accommodate the people who wanted to eat here, but even then there was usually a wait. I did not always have the luxury of being able to stick around, but I always felt that it was worth the wait for the food that was served here. 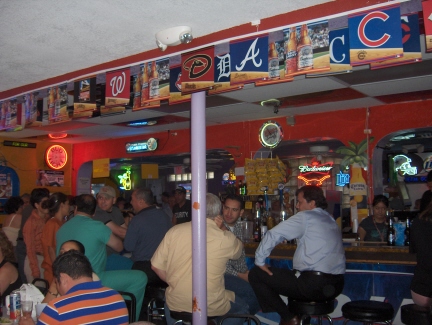 The bar at L & J is very popular, particularly in the evening

It took me a while to realize that the restaurant was also open in the evenings and on weekends, and that this afforded an easier opportunity to get a coveted table. After Covid the evening hours have been cut back quite a bit, so I do not think it is much easier to get a table than at lunch time. My strategy at present is to try going between about 2:30 and 5:00 p.m. (I can get very hungry at this time if I had not eaten lunch, but I really enjoy the food once I get it).

In addition to the food, there is also the aspect that you are experiencing a piece of El Paso history, with L & J being in operation since 1927. The story of the restaurant seems to be deliberately vague about whether it served alcohol during Prohibition, but for some reason it was quite popular at that time and after the time liquor became legal again (remembering, of course, that in that period there was about a six to one ratio of seats in the bar versus seats in the dining room).

For some, part of the historical experience is visiting Concordia Cemetery across the street. I think this is the largest cemetery in the city and it is definitely one of the most historical, with grave sites for notable figures such as gunfighter John Wesley Hardin as well as numerous local residents such as my own great-great grandparents and other family members. I think that in terms of history this cemetery is comparable to ones such as Tombstone, Deadwood, or other old west burial grounds. Unlike some of these, though, Concordia has not been turned into a tacky tourist trap (maybe El Paso’s economy would be better if they did make a more active effort to promote the city’s historical sites).

Moving the story up to modern times, L&J has now expanded with new dining rooms, and the crowds of people dining here are much larger than before. I think that for a while the restaurant was struggling to provide food that was the same quality that it served when only a limited number of customers could eat here. Something happened during and after the Pandemic, though, that motivated the management and allowed them to serve mass quantities of the same excellent food I experienced in my early days of coming to the restaurant. Now I really think this is the best Mexican restaurant in the city (giving the proviso, though, that I am talking about the unique El Paso border style of food that among locals is commonly called “Mexican food”). 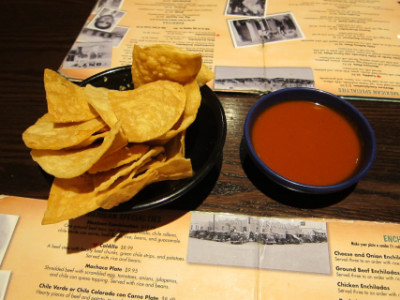 The salsa is different than at most restaurants because it is puréed. In my former review I called it a “liquid concentration of high chile potency,” and it remains this way at the “new” restaurant. This photo was taken during the restaurant’s “down” period when they only served red salsa, but after the pandemic they went back to serving both red and green as shown in the following photograph: 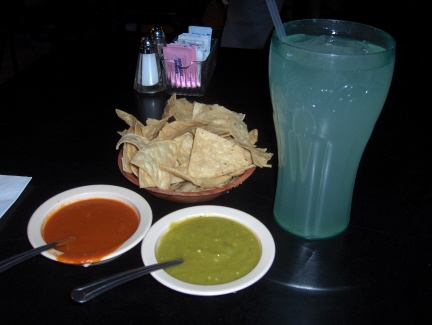 It is hard to resist the urge to fill up on chips and salsa before your meal arrives, but if you succumb to temptation the restaurant will bring refills of both chips and salsa. 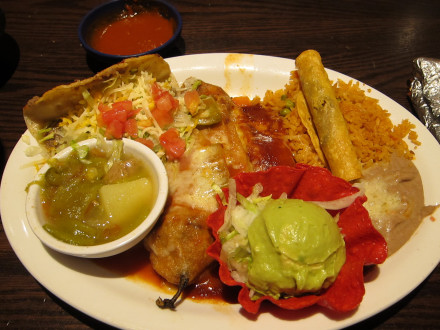 With the combination plate you get a good sample of the food at L & J. For me this plate stretches the limit of what I am able to eat at one sitting, but of course I do not complain too much! It also turns out to be about the right quantity when I come for lunch in mid or late afternoon in order to avoid the waiting line.

It would be very hard to say which are the best items, in case you want to order a smaller dish with just a few items. Mostly I would say if you like enchiladas, order enchiladas; if you like chile verde, order that (and the same with the other items). L & J does all of these items well. For my own taste I would say the following: 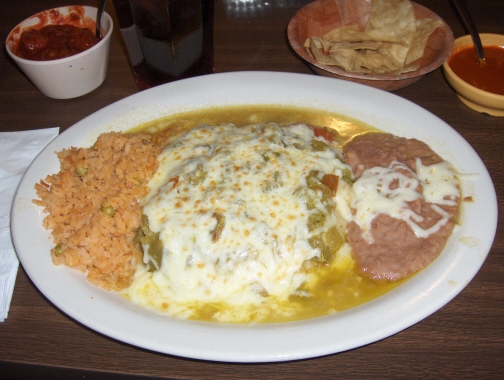 I do not generally like Green Enchiladas in El Paso as much as the red, but the one at L & J is very close (based on past visits). My description of it in a previous review was “very hot green chile strips in a soupy sauce poured over the tortillas.” I assure readers that this is a good thing when you experience it.

Other Notes
This is definitely working class Mexican food, and not the alta cocina that is becoming more popular. For what it is, though, I think this is the best in town.

For just about any individual item you can probably find some restaurant in town that does them better. I know this is true for the tacos. For other items, such as the salsa, there may not be any that are better.

The crowds of people and long waiting lines are not always as bad as I make them out to be–I just want readers to be prepared for this possibility (actually it is a strong probability).

I do not have much experience with the bar but information on the Internet indicates that it is somewhat limited–if you want hard liquor you can bring your own. They do have beer and wine based drinks, though.