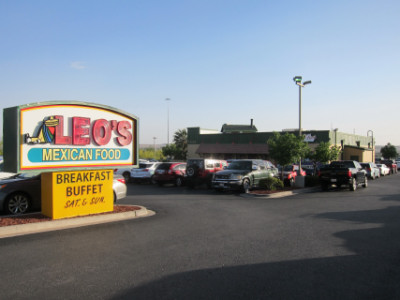 Before writing about one of El Paso’s “classic” restaurants I try to search other material that has been written about their history and connection to other restaurants. In the case of Leo’s the story can be found on its web site which recounts the fact that the restaurant was founded in 1946 by Leo Collins and Willie Terrazas at the corner of Cotton and Yandell Streets in El Paso. It further states that “From this location, a tradition was started that has been passed down from generation to generation.”

Willie Terrazas, Jr., manager of the one and only Leo’s location now in operation on Remcon Circle in west El Paso, enjoys talking to customers and telling the restaurant’s story (and he said he remembers me from their former “Crossroads” location at 8001 N. Mesa). He stated that this restaurant has been in operation for 13 years (as of 2019) and that the last of their other locations at 315 Mills closed in 2016 (it became La Morena Restaurant but is now home to Mac’s Seafood). 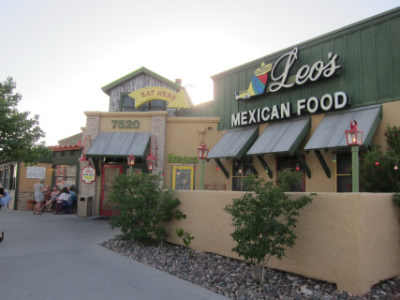 I have read that Leo’s was the first restaurant in El Paso to serve baked cheese enchiladas as well as the first one to offer sopaipillas (here they are served free with all entrees). Even today these two features are not widespread in the city. I would say that red enchiladas are probably the best item here, but what I like even better is a combination plate such as the tri-color baked cheese enchiladas or a combination of enchiladas with a chile relleno or other items.

I have been going to the various Leo’s since the 1970’s, and along the way I have tried many other items but at the time I was not taking notes about them to include in an article. The 1970’s was also the time there were nine locations including one in Lubbock, so for anyone who has been around as long as I have it would be hard not to have multiple experiences with Leo’s to the point that it is as much about nostalgia as it is about their baked enchiladas and other favorites that I am sure everybody has.

For locals an article about Leo’s is not one that will lead them to a new discovery, but it is a reminder that there are several long-running restaurants that helped put El Paso on the map for Mexican food and which still enjoy a good deal of popularity. 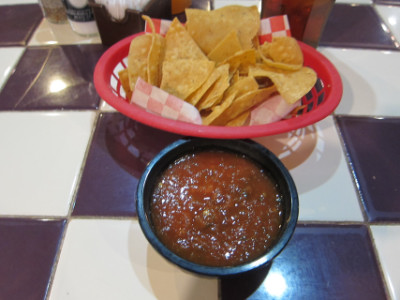 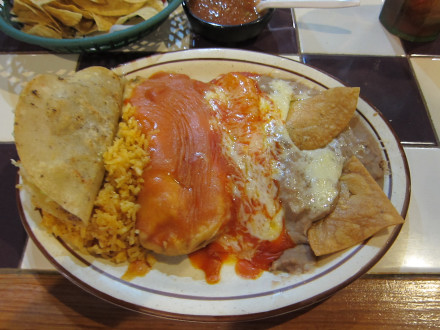 No. 2 “A Popular Combination”

The Number 2 Popular Combination comes with an enchilada, taco, and a chile relleno. Interestingly, these are the same items served at the No. 2 dinner at Avila’s, another restaurant that serves baked enchiladas, sopaipillas, and which has a tri-color enchilada plate. Sometimes it seems as if all Mexican restaurants in El Paso serve pretty much the same food, but even if the menus are similar there are nuances in the food that definitely make each restaurant unique.

The Red Enchilada is usually my favorite item at El Paso Mexican restaurants, and it has been the same here. I really do not crave them enough to order a whole plate of them, but they are very good on a combination plate with other items. They are less spicy than most of the ones in El Paso but they are spicy enough that I still classify them as “authentic” El Paso style enchiladas. At times I have thought there was a hint of cumin in the red chile but if so, it follows the proper procedure for El Paso style cooking in that the cumin content is very slight and does not overwhelm any of the other flavors.

The Chile Relleno is a good representation of this item as it is commonly prepared in El Paso with a mild Spanish sauce on top of a spicier green chile. One thing I like is that it is not “over breaded” but there is just enough breading to add some flavor.

The Taco is made with ground beef, but because of the melted cheese, lack of grease, and semi-soft shell (which is also not too greasy) this is better than most similar tacos. I think that in addition to the initial frying, the taco is baked along with the other items on the combination plate.

The beans and rice are both five-star quality, but I particularly like the beans with the baked tostadas inserted into them (and the beans become a dip to put on them). It is my understanding that the beans are vegetarian (and are not made with lard). 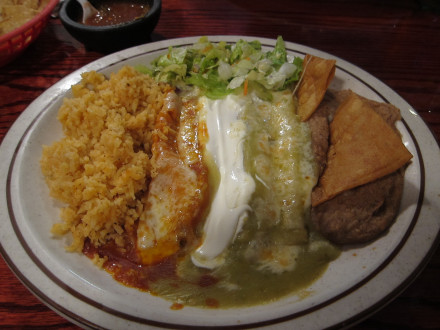 Tri-color enchiladas with red, sour cream, and green (and are the colors of the Mexican flag)

One of my favorite dinners here is the Tri-Color Baked Cheese Enchiladas plate (No. 16 in the Entrees section of the menu). Also called the “Mexican Flag,” it comes with a red, green, and sour cream enchilada. On the current menu you have to pay a dollar extra for rice and beans, but you do get a free sopaipilla for dessert.

The sour cream enchilada is put on top of a green chile enchilada, so chile lovers are not missing out by ordering the sour cream (although I think they will put it on top of red chile on request). You also have an option of having onions or no onions on top of any enchilada order. 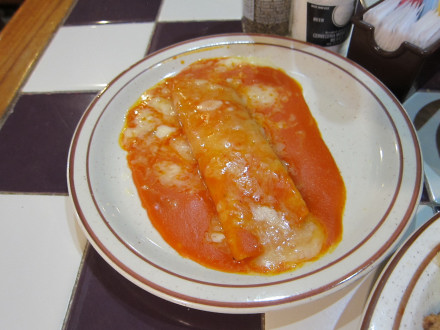 They can also give you a Red Enchilada a la carte (or any of the enchiladas that they serve). This was especially enjoyable because of the amount of chile that was on it (although the ones on the combination plates have a generous amount as well). 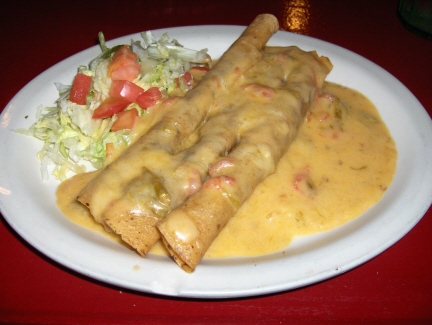 I think the menus at many Mexican restaurants are far too dependent on beef as a flavor enhancer, but the beef dishes at Leo’s are one thing that seems to be very worthwhile. One example is the Flautas that had very good shredded beef with a crispy shell. The fact that the waitress recommended beef over chicken confirms the observation I had that perhaps the beef is one of the things the restaurant does best.

Flautas usually come with guacamole and sour cream, but I ordered some with Chile con Queso to see if they would be anything like the queso flautas I had at the now closed Casa Jurado. Unfortunately, these flautas turned out to be disappointing since the queso turned quickly into a solid mass that did not taste like real cheese. For that matter I did not really get much flavor from the chile that was mixed into the queso. Ordering the chile con queso on flautas is more economical than getting an order of chile con queso, but my tendency would be to pass on either one of them. 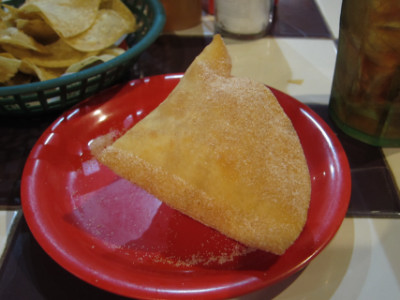 Sopaipillas come free with the entrees, and this is one of the signature features of Leo’s. Over the years I have been coming to this location the sopaipillas have evolved from ones that were somewhat oily to ones that capture the fluffy goodness that I think any New Mexico restaurant would be proud to serve.

Other Notes
My view of the Remcon location has changed quite a bit since it opened, and it has been for the better. I have found it to evolve from inconsistency and “tourist” Mexican food to the same type of food I remember from the old downtown location. It is still a good place for tourists (it is right off Interstate 10 at the Mesa St. exit on the west side) but now they will get the true taste of El Paso style Mexican food.

I have not delved much into the menu at this location because I like the enchiladas so much. When I have ordered the combination plate I have found the chile relleno and taco to be quite good as well, and over the years I have enjoyed other items at Leo’s (but I do not remember specifically which ones they were). I do have confidence, though, that there are many good choices here.

I need to especially mention the tri-color enchiladas. There are only a few restaurants in town that serve this dish, and I have debated which one is best. Although I think G&R has the best in terms of the red and green chile, a strong case can be made that Leo’s offers an experience that is just as good or better. For one thing the enchiladas are baked (as they are at G&R and at a number of other restaurants) and I definitely think baked enchiladas are some of the best. The rice and beans here are better than just about anybody’s, and these come with a sopaipilla. Also I am really debating whether the chile is in fact better at G&R (especially the red). Avila’s also has a baked tri-color plate that comes with with a sopaipilla (this is one that I like almost as much as the one at Leo’s).

Leo’s is a restaurant where I think the atmosphere enhances the experience. The manager comes out and talks to customers, the service is very good, and the building is pleasant. Sometimes there is a short wait to get a table but these have often resulted in having enjoyable conversations with other customers. In any case, coming to Leo’s is more than just the food.

When I mention “El Paso style” Mexican food, Leo’s is a place where you can get a good idea of what it is all about. In some ways it is even better than the average restaurant (I especially like the fact that they bake the enchiladas). There are a lot of choices for El Paso style Mexican food, and Leo’s is one of the ones who has been doing it the longest (I saw a source that said when Leo’s first opened there were only three Mexican restaurants in El Paso, and Leo’s became the fourth because “What El Paso needs is another Mexican food restaurant”). I do appreciate the history of the restaurant, but I would say Leo’s strength is its food and not just because it has been around for a long time.

Mar. 2022 Update: Since the pandemic I have observed the following: (1) They have not had the breakfast buffet (or even a breakfast menu) even though their sign and various advertisements around town mention the buffet. (2) The long waiting lines to get a table have largely disappeared. (3) They are closed on Monday even though they have traditionally been open seven days a week.

Cuisine: Mexican El Paso
Cost: $$
Hours: Closed Mon. (traditionally it has been open 7 days a week but I think they are currently experiencing a staffing shortage)
Accessible: Yes
Smoking: No smoking
Alcohol: Bar
Special Features: Breakfast buffet on Sat. & Sun. (but has not been available since the pandemic)