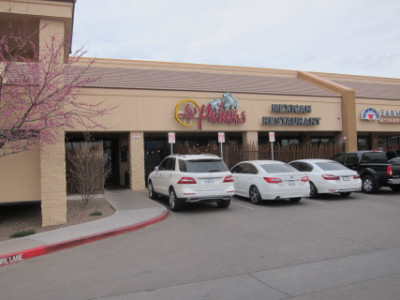 Las Palmas is located in a strip mall in east El Paso, and it seemed to be an unlikely candidate for being one of the best Mexican restaurants in El Paso strictly from its location and appearance. It gets packed at lunch time, but many El Paso restaurants are the same. Several times, though, I have encountered a waiting line to eat here, and it seems to be almost exclusively because they think the food is much better than at most other places.

In large part I make the statement that this is one of the best Mexican restaurants based on my standbys–red enchiladas, chile relleno, rice, beans, chips, and salsa. In addition, though, I have learned that I am quite satisfied with items that are far from my normal choices, such as guacamole, albondigas (meatballs), and seafood. It is not that I normally dislike any of these items, but that I rarely find places that can prepare them well.

Even though Las Palmas is busy, it has not been “discovered” like some some of the more popular restaurants have been. This is a good thing, because I have seen some of the more popular places go down somewhat in quality because they have to expand, add new cooks, etc. in order to meet the demand of the customers they have. I think Las Palmas is small enough to maintain their quality and consistency (and I have to say that the majority of restaurants in El Paso are like this, but not many have a flavor that I like as well as at Las Palmas).

There are different lunch specials each weekday, but rather than regular menu items served at a lower price, they are items that are only served on that day (and only for lunch). These seem to be items that take longer to prepare than most dishes, and include such items as albondigas and mole (only available on Thursday). These are also items that are not typically available at El Paso restaurants. 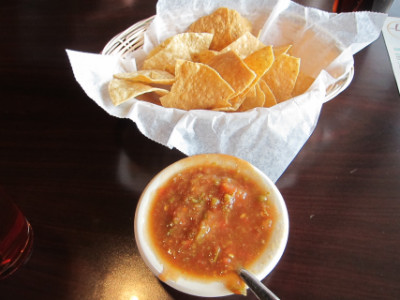 The chips and salsa were a good indication that the food would be very good here, particularly because of the fresh and flavorful salsa. The salsa is not super spicy, but it does have a good kick. 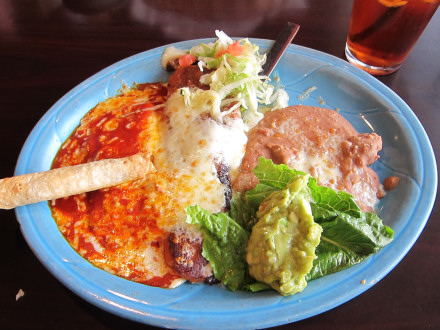 Ordering the Las Palmas Special allowed me to enjoy what are usually my favorite items, and to even get some bonus items such as guacamole.

If I had to pick a best dish here it would be the Chile Relleno. The flavor of the relleno was probably the biggest factor in convincing me that Las Palmas is at one of the highest levels of Mexican food in the city. It is covered with cheese, and writing this review largely from memory I am not sure that it even had what I would call a sauce on top. It stuck in my mind, though, that the flavor was more than just the traditional chile itself and the cheese. The breading was excellent, and I think this was the source of much of the flavor that I thought was so good.

The Red Enchilada is typically my favorite item on a combination plate. The one here was better than any I had recently tried, and very close to some of my favorites that I had not eaten recently (Forti’s, L&J, etc.). It was very much a case that while I was not sure the enchilada was the very best in town, having both an enchilada and chile relleno together that were this good made Las Palmas one of the best restaurants overall in my book.

I put in my notes that the Guacamole was the best that I have tried, but this does not include some that I may have had in Mexico or some from now closed El Paso restaurants (Casa Jurado may have been one of these). In any case, the guacamole was extremely good.

I barely noted the Flauta because this was much the same as I could get anywhere. If you are from any city other than El Paso, though, I think this will probably be one of the best you have tried. The flautas here only come with beef (some restaurant also offer chicken). 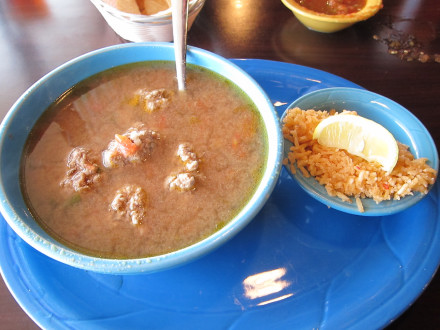 Albondigas is a special on Thursday

The Albondigas served Thursdays as a lunch special are a little deceiving because a bowl of soup like this does not look as filling as it actually is. It has a good number of beef meatballs that make a very substantial meal, and the broth is so flavorful I could tell the restaurant really knows what it is doing when it comes to Mexican food. Albondigas are not typically one of my favorite Mexican foods, but I always enjoy something that is among the best in its class, as the one here proved to be. 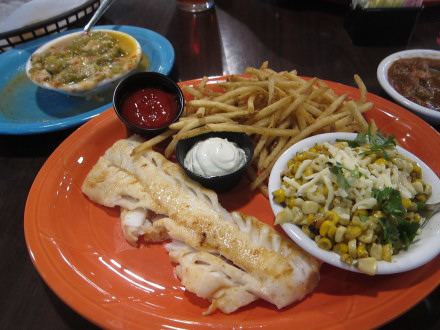 Cod was one of their Lent specials

I had read in a news article that Las Palmas was one of the restaurants in town that served Lent specials. While this was true, they did not have specials as I thought of them (that included lentil soup and capirotada), but these could be ordered separately. The result was one of the best Lent meals I had, but at a price that left me with somewhat of a sticker shock. The food here was what I would call alta cocina, and I think only Cafe Mayapan gave me a Lent special that was at this level. I would not say they were overcharging for the meal, but just that one should not go here expecting to get the typical Lent meal.

Specifically, I had Grilled Pacific Cod that was about the freshest version of this type of fish I have had in El Paso. This in itself was worth the price, but they suggested an optional chile con queso topping that really made this one of the best fish dishes I have had in a long time. I also tried the sweet chili sauce that I thought was lackluster. The plate came with rosemary fries which I barely touched but they were good as fries go (just not something that went with the alta cocina dinner I was having, and besides I got full without them). One reason I passed on the fries was that I ordered lentil soup (lentejas) and dessert (capirotada) just because this is usually part of my tradition. Like the other items, these did not disappoint, and all of this was more than enough food.

The side dish of Corn seemed to be the elote style, and was very good.

One additional note is that I think the cod is on the regular menu, but it is just that Lent is the only time you

Other Notes
Lunch has always been busy but the wait for the Lent special was particularly long. I think this was because it was Friday (the other times I went were on weekdays) and because they were short-staffed. The wait time would probably not be anything unusual in large cities where people are trying to get a table at a fine dining restaurant, but was unusual for El Paso (even when going to some of the ones with the best food).

At this point I think I would order just about anything on the menu, and particularly things that I might usually skip because I am often disappointed by them. Here I think just about any dish will be cooked the way it should be. It can be a hassle, though, to wait so long for a table and pay this much for the food (but I will continue going because sometimes I just feel like treating myself).